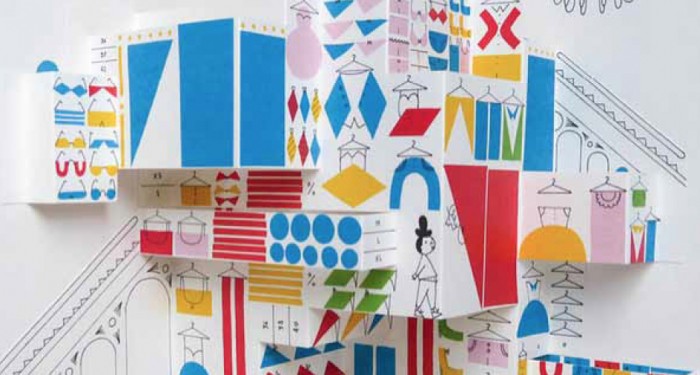 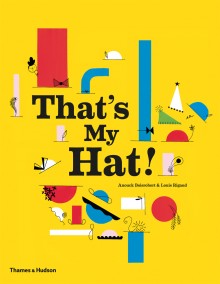 By Louis Rigaud and Anouck Boisrobert 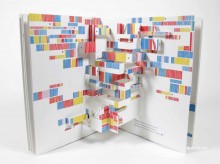 Books at the bibliotheque


A gust of wind is the enemy as it sweeps a young boy’s hat swiftly from his head, only to be swiped away by a cheeky monkey who takes it on a whirlwind trip of the city. Will our hero ever be reunited with his beloved blue hat?

With a disparate display of sharp geometric shapes artistically adorning the cover of That’s My Hat – or as we might like to call it in its original French Oh! Mon chapeau – it is clear from the outset that this is one stylish book.

With nods to the likes of the Stravinsky Fountain that resides outside the Centre Georges Pompidou in Paris and shades of the wonderful abstract art of Sonia Delaunay, each page is conceived like a work of art.

Clean lines, a paucity of palette and sleek design give the book an elegant and deceptively simple feel, when actually it is crammed full of charming detail, made all the more enticing by the fact that readers have to actively seek them out with a playful game of hide-and-seek. This book oozes oh-là là and chic with a capital C

The book begins with a playful sketch that sees a half circle and a straight line become a hat, which is a gust of wind whisks away, hastily followed by a sketch of a rectangle and two circles which becomes a taxi so our hero can follow in hot pursuit: Follow that Hat!

And follow we do, zig-zagging through traffic jams and into the zoo, where the hat is procured by a cheeky monkey, who then takes us off to the park and into the city, a museum, a library …

The game of chase is fun but, as they say, it’s the journey rather than the destination that counts. En route, we are given the chance to admire families frolicking in the park, to spy a sumptuous array of breads and pastries at the patisserie and uncover all manner of fashionable delights in a swanky department store.

As the narrative scampers at a pace, the paper engineering also becomes more complex before it culminates in a fantastic skyscraper with monkey and hat on the top. How will it all end? Cue a handy sketch of a half-circle and a few straight lines, and hey presto, a very timely parachute comes to the rescue.

This gorgeous book will delight those of an artistic persuasion, but there’s also heaps of fun to be had with its cheeky storyline and lots of details to spot and find in the images. Its simplistic illustrations are also a great way to inspire young children to create their own impressive artworks with simple shapes.

Fun fact The Fedora hat got its name from the play Fédora by the French author Victorien Sardou, who wrote the part of Princess Fédora Romanoff for famous actress Sarah Bernhardt. In it, Bernhardt wore a centre-creased, soft brimmed felt hat. Today’s most famous Fedora-wearing is Pharrell Williams.

Did you know? Ever wondered where the phrase “mad as a hatter” comes from? In 18th and 19th century England, mercury was used in the production of felt hats, and factory workers were exposed daily to trace amounts of the metal. This accumulated in their bodies over time, causing some to develop dementia caused by mercury poisoning (called mad hatter syndrome).

Author notes Anouck Boisrobert graduated in 2009 from the Arts Decoratifs of Strasbourg and has collaborated with Louis Rigaud on several bestselling books for children. Louis Rigaud is also a graduate of Les Arts Decoratifs in Strasbourg and works independently in multimedia creation and illustration, appropriating and playing with the constraints of various media: the book, the moving image, web, and video game.