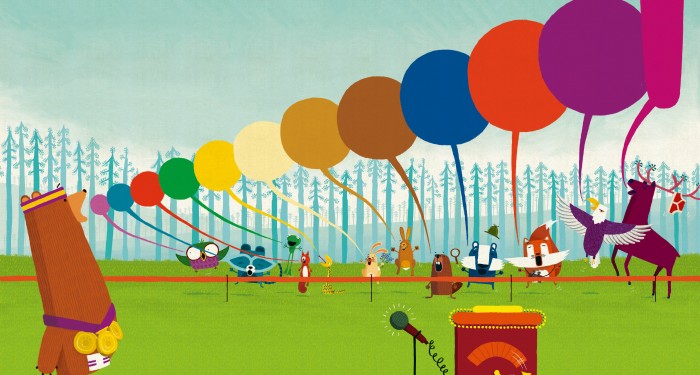 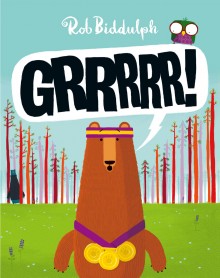 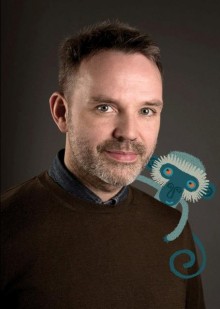 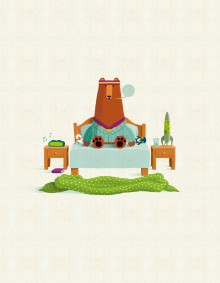 A grizzly… but no growl

As undisputed Champion of the Forest, no other woodland creature can hold a candle to big bear Fred when it comes to belting out the most awesome of Grrrrr-rowls. But when you’re a winner, it can be tough if it looks like you’re losing your crown. What is a Grizzly without the glory?

Gritty determination, a relentless training schedule and single-mindedness are at the heart of Fred’s will to win. Eschewing fun, frivolities and even friends, he spends his time in solitude toning his muscles and perfecting his skills.

There’s a touch of Olivia Newton-John’s Let’s Get Physical about Fred’s work-out get-up with the natty sweatband adorning his big bear head. And what a sporty all-rounder he is: a brilliant Fish-catcher, a fine Hula-hooper and quite the marvel when it comes to scaring humans. But it’s his mighty growl that really sets him apart in the competitive stakes

Then calamity strikes. Just as Fred is about to enter the annual Best Bear in the Wood competition, he realises he has lost his growl, giving new bear on the block Boris a chance to shine. But rather than letting despair creep in, Fred finds himself in unfamiliar territory as the rest of the woodland creatures come to his aid. And he rather likes it.

Written in a lively rhyming text, this is a satisfying and funny story about friendship and competitiveness, with the moral that while winning is nice, the rewards of friendship are far greater than any gold medals.

Biddulph’s stylised renditions of the animals is quite delightful, especially the star bears with their elegantly elongated necks. As well as Fred’s nod to Livvy N-J, there’s a touch of Beatnik hipster about Boris with his turtleneck sweater, curly moustache and Ray Ban specs.

There’s also a wonderful contrast in the bright colours of the wood by day – all bright orange, red and lush green – and its dark shades of moody blue come nightfall. Make sure you remove the sleeve to uncover the full glory of Fred in dark silhouette beneath a starry sky and an owl hovering like a mysterious UFO.

Fans of typography will also want to check out the endpapers where ‘Grrrr!’ is presented in a variety of typefaces – from classic Circus to Great Gatsby-style Atlas font. A sure sign of the art director in Biddulph coming out!

Fun fact Bears are fast; they can run more than 60 kilometers an hour (37 mph) – that’s twice as fast as an Olympic sprinter. In fact, a bear can outrun a race horse over short distances, but has little endurance. To put their speed in perspective, bears can run 15 metres per second (50 feet per second).

Did you know? Bears are highly evolved social animals with intelligence comparable to that of the great apes. Bears often share friendship, resources and security. Mother bears are affectionate, protective, devoted, strict, sensitive and attentive with their young. Not unlike people, bears can be empathetic, fearful, joyful, playful, social and even altruistic. They’re all individuals and have unique personalities. Generally, bears are not mean or malicious; they are very gentle and tolerant animals.

Author notes By day, Rob Biddulph is the award-winning art director of the Observer Magazine. By night, he makes up silly stories for his three daughters and draws pictures to go with them. He prefers to paint penguins, pirates and pachycephalosauruses but occasionally he’ll attempt something that begins with a letter other than ‘p’. His debut picture book Blown Away won the Waterstones Children’s Book Prize in 2014. Rob lives and works in London.