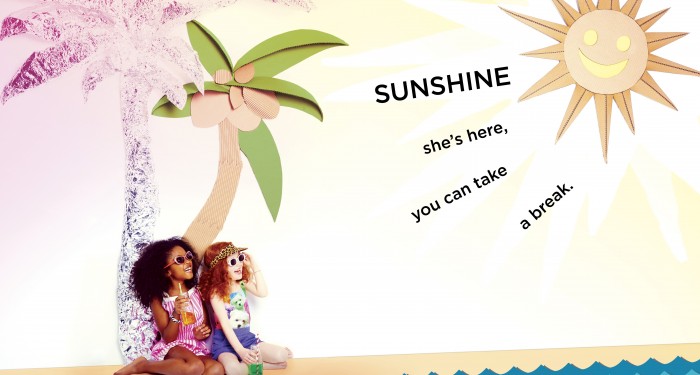 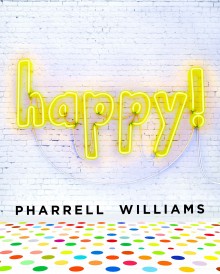 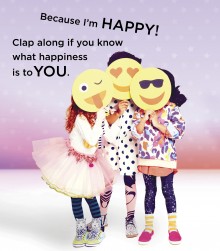 “It’s cool to bring happiness to someone’s day” says singer Pharrell Williams in this sunny, funny debut picture book inspired by the mega-hit that has been on everyone’s lips: Happy!

Chances are you’ll already know the words to this book as the smash hit anthem of Despicable Me 2. There’s equal betting that you are going to spontaneously burst into song, too.

It’s a fact that singing and dancing can elevate your mood – the actions release feel-good endorphins and before you know it, your face will be breaking out in a big beaming smile. That’s pretty much the effect you’ll experience flicking through this bright book filled with happy faces and positive emotions.

Using the lyrics of Pharrell’s catchy song – and a useful aide-memoire if you need to brush up on the lyrics for a sing-along – the book exudes a child-like insatiable lust for life that is infectious.

Illustrated with real-life photography of kids set in various fun montages flying kites, soaring into space and generally having a rare old time of it, the book is a paen to playfulness, imagination and the revelry of childhood. It also has sleek design aesthetics with zingy graphics and layout that add to its upbeat vibe.

With just a teeny hint of ‘bad news’ and a few glum faces that appear fleetingly, it’s a book that explores emotions and promotes the positive, with an underlying message that doing good feels good.

There’s also a call-to-action from the man himself to all his Happy Helpers to spread the feel-good feeling with smiles and thoughtful consideration for others. And that’s got to be a good thing.

It helps that Pharrell seems to be such an amiable sort of chap, in his signature Vivienne Westwood hat that’s become as famous as the titfer worn by Dr Seuss’ Cat, rather than one of those arrogant pop-star types (mentioning no names, ahem, Kanye).

With a dedication to his son, Rocket, Pharrell’s reflection on parenthood is also one that we can all agree on: “Thank you for teaching me to see the world in a new light.”

What are you waiting for? C’mon, get Happy!

Did you know? Pharrell Williams’ mega-hit Happy achieved 1.8m sales to become only the fourth single to be declared triple platinum in 20 years. Not bad for a song that was rejected a whopping 9 times before Pharrell hit on the trick of “feeling” not “thinking” to hit the right note for his final version.

Fun fact Pharrell’s son Rocket Williams, born in 2008, is named after Elton John song Rocket Man. Pharrell wrote Rocket’s Theme, which appears on the Despicable Me soundtrack, after his son. Pharrell is clearly a fan of all things space: his record label is called Star Trak, a reference to his love of cult space adventure show Star Trek.

Author notes Redefining cool for a generation, Pharrell Williams is a creative force, using music, fashion and design to express his distinctive style. As a singer, songwriter and producer, Pharrell has earned 10 Grammy Awards for his word. His multimedia creative collective I Am Other includes music, fashion, film, television and art endeavours. The company was built on the philosophy that individuality is the new wealth, and this sentiment flows through each project. Happy! is his first children’s book.