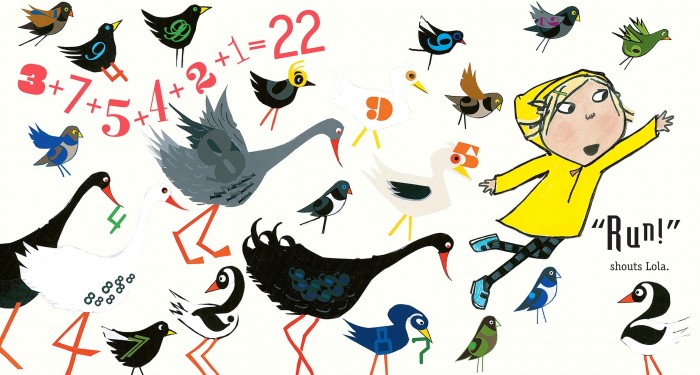 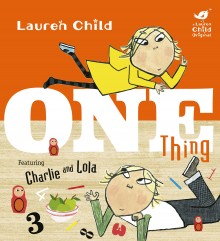 Kate Greenaway Medal (2000) for
I Will Not Ever Never Eat A Tomato and
Nestle Gold Book Award (2002) for That Pesky Rat. 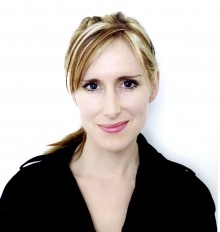 Everyone’s favourite siblings Charlie and Lola are back with a witty tale that celebrates numbers, in all manner of numerical conundrums, calculations and configurations.

When you think of numbers, do you consider the soft curves and symmetry of a number 8, the dramatic criss-cross of a number 4, or the sweeping angular flair of a number 7? Possibly not, but then, according to Lauren Child, you might be missing something!

“I always wanted One Thing to be a book that celebrated numbers and how they are so beautiful to look at when written down, and their different shapes on the page,” says Lauren. “I love the sound of them – there is poetry in numbers.”

Charlie and Lola’s world is filled with a dizzying array of numbers and mathematical concepts – ah yes, there’s “poetry in numbers”, alright – whether they are counting the time it takes to brush their teeth, working out how many minutes late they are running, or negotiating how many treats they will get at the shops.

Numbers take a starring role as they twirl and whirl playfully across the pages. Charlie assumes his customary role of patient pedagogue, while Lola is her usual quizzical self, pondering questions that might seem unfathomable to some but to which Charlie invariably has a clever answer

This is a masterful paen to the wonders of numeracy, presenting numbers in a positive light and introducing basic mathematical concepts of addition, subtraction and multiplication in a lively, playful way that will be welcomed by parents and teachers. Of course, Lola puts her own spin on proceedings, displaying some rather unique and random counting skills, giving young readers and burgeoning mathematicians the chance to correct her.

As always, it is the warm, funny sibling relationship that really shines. Irrepressible, occasionally irascible but always utterly irresistible, Lola has become a poster girl for the preschool set. Charlie, meanwhile, is the perfect pin-up boy for big brothers everywhere.

Fun fact “I don’t know if a squillion is a number” says Charlie. According to the Oxford Dictionary, a squillion is an indefinite very large number. Other large numbers are a billion, trillion and a zillion, but what’s the biggest? You might think ‘infinity’ but that’s not actually a number, it’s a concept.

Did you know? English mathematician Ada Lovelace (1815–52) is recognized as the world’s first computer programmer. As part of her work, she produced a mathematical algorithm that would be later used in computers. She was also the only legitimate child of the famous English poet Lord Byron.

Author notes Lauren Child is a multi-award-winning writer and artist whose books are known and loved the world over. She is the creator of many much loved characters, including Charlie and Lola, Clarice Bean and Ruby Redfort. Lauren is a passionate advocate for visual literacy and the importance of quality picture books for children. She is a trustee of the recently-formed House of Illustration and was awarded an MBE for her work and was appointed as an Artist for Peace by Unesco in 2008.