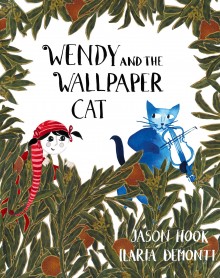 WENDY AND THE WALLPAPER CAT

Wendy And The Wallpaper Cat

What’s a sleepless gal to do when counting sheep – and turning cartwheels – fails to whisk her away to the land of Nod? Perhaps a trip to her grandfather Walter will provide a soporific solution…

Bedtime in Wendy’s drab, grey bedroom is not a happy affair. Despite all her attempts to fall asleep, poor Wendy tosses and turns but doesn’t get a wink of sleep. Perhaps a change of scene might do the trick? So Wendy and her family troop off to visit her grandfather.

And what a treat is in store! Grandpa Walter’s abode is an elegant kaleidoscope of colour and pattern, from his pristine landscaped garden to the star fish and seashells of his bathroom and the proliferation of bodacious blooms in the bedroom

As Wendy wanders from one spectacularly decorated room to another, the scenes around her come to vivid life and assault her senses. She can smell the magnificent ruby red roses that bedeck the walls and taste the succulent juicy oranges that nestle amid verdant foliage; the seascape in the bathroom is so evocative that she even dons a swimming costume, rubber ring and flippers while Grandpa does a spot of fishing.

But of all the amazing rooms, there is one that is more magical than the rest: the child’s room decorated in soothing shades of blue where a cat plays a fiddle and cows jump over the moon. Promptly proclaimed as Wendy’s favourite, she also claims the room as her’s for the night. And bedtime can’t come quickly enough.

That night, Wendy has the best sleep of her life, filled with fantastical dreams set against a backdrop of Walter’s wonderful wallpapers featuring foliage and oranges, roses and the seaside, and her favourite nursery rhyme characters, including the dancing blue cat playing his fiddle.

As she awakes the next morning, refreshed and revitalised, her parents realise the error of their ways. When they get home, Wendy’s dreary bedroom is transformed into a magical space that will fire her imagination – and bring a blissful night’s sleep.

Illustrator Ilaria Demonti masterfully creates softly drawn characters that blend elegantly into their surroundings. The book is made even more special by the authenticity of the designs of Walter Crane, a popular artist who was one of the pioneers of decorative wallpaper for children (Incidentally, Crane was an examiner at South Kensington Museum, now the Victoria and Albert Museum, where many of Walter Crane’s original wallpapers can be seen by appointment in the Prints & Drawing Study Rooms at the V&A).

As well as being a paen to decorative art and the power of pictures to elevate our mood, the book also gives a wonderfully warm depiction of the grandparent-grandchild relationship, with Wendy clearly doting on her debonair ancestor Walter (who not only shares Crane’s christian name, but also pays homage by wearing an exceedingly dapper and rather eccentric floral suit made from Crane’s The Formal Garden design).

Just one word of warning: this book may make you want to redecorate your walls.

* Wooed by wallpaper? * Well, we just happen to have some wonderful inspiration to decorate your child’s room with wallpapers by Ferme Living, Hibou Home and Sian Zeng’s Magnetic Woodlands.

Did you know? The vogue for decorating children’s nurseries with playful images to stir imaginations began in the 1870s. Many designs featured fairytales and nursery rhymes. Among Walter Crane’s whimsical wallpaper designs were Sleeping Beauty (1879) and The House That Jack Built (1886).

Fun fact American author Mark Twain, who famously wrote Huckleberry Finn, was among Crane’s devotees, and used his design Miss Mouse At Home (1877) to decorate his children’s nursery, as well as the Nursery Rhymes paper features in Wendy and the Wallpaper Cat.

Designer notes Walter Crane (1845–1915) was an English artist, considered to be one of the most influential and prolific children’s book creators of his generation. Along with Randolph Caldecott and Kate Greenaway, Crane was a pioneering contributor to the child’s nursery motif that became popular in children’s illustrated literature in the latter 19th century, with his work gaining mass popularity through mass-produced picture books known as ‘toy books’. Crane was part of the Arts and Crafts movement and produced an array of paintings, illustrations, children’s books, wallpapers, ceramic tiles and other decorative arts. He is also remembered for his creation of a number of iconic images associated with the international Socialist movement.

Author notes Jason Hook has written over twenty books for children, ranging from a boxed set of poems and a robot adventure book to biographies of Roald Dahl and Muhammad Ali. He continues to write fiction for both children and adults, and was runner-up in the BBC’s End of Story writing competition. He lives by the seaside in Brighton, where he occasionally watches dragons fly over the ruins of the West Pier – inspiration for his book Where’s the Dragon? Jason studied literature at Kent University before becoming an editor of children’s history books, and publisher at the Ivy Press. Ilaria Demonti is a freelance illustrator based in Milan. She is the illustrator of Sur le Fil and Qui se cache dans la nuit?