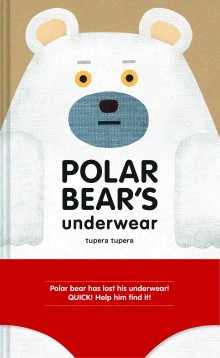 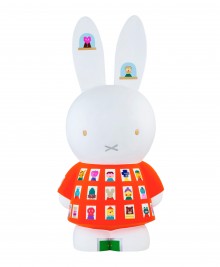 Who’d have thought that polar bears were creatures of such modesty, but this snowy white polar is in a panty pickle: he can’t find his under garments. And to spare his blushes, he sets off on a quest to retrieve his elusive underwear…

With a trusty mouse as his detective companion, Polar Bear is determined to find his pants – though of course it would help if he could remember what they looked like. Let’s hope he can recognise them when he sees them.

They’re certainly not bold striped ones: those are Zebra’s favourite pair. That pair decorated with donuts, lollipops and cookies looks tasty – but they belong to Pig. The teensy floral pair look like they might be a tight squeeze; that’s because they belong to a weeny fluttering butterfly. And so the search continues…

Anything to do with underwear tickles a toddler’s funny bone and is an instant hit. There’s much ensuing hilarity as Polar Bear unearths the underwear secrets of a succession of animals, each one choosing a distinct way to
cover up their private parts

Children will enjoy the fun guessing game, as each flamboyant pair of pants is revealed. As Loyd Grossman might say in Through the Keyhole, ‘Who would wear underpants like this?’ The clues are there: carrot motifs for a rabbit (who has a novel wear of sporting his pants), an ‘I Heart Mice’ logo for a greedy cat, and plentiful legholes for an octopus.

But it still doesn’t help Polar Bear locate his own long lost lingerie. Expect a rather unexpected – and hilarious – conclusion. And it has something to do with wearing white undies all along.

This is a playful story, with a simple text and lost-and-found narrative. Tupera Tupera’s strong graphic style shines through, and there’s an added element of fun with the cut-outs of various underpants before each pair is handsomely displayed on its proud owner. The cover also has a removeable pair of red underpants: now those wouldn’t be so hard to spot on a polar bear!

In short, it’s a paen to pants of all shapes and sizes.

Did you know? In 2014, a pair of Queen Victoria’s silk bloomers sold at auction for £6,200. Made from yards of white cream fabric, with a waist measurement of 52in (132cm), her intimate apparel was personalised with the initials VR (Victoria Regina) embroidered on them.

Author notes Husband and wife designer duo Tatsuya Kameyama and Atsuko Nakagawa launched the Tupera Tupera label in 2002. Tatsuya studied Painting at Musashino Art University, specialising in engraving, while Atusko studied Textile Design at the Tama Art University. Working mostly with collage, they endeavour to come up with ideas that will provoke or surprise. Their main sources of inspiration are everyday life, communication with others and living with children. Their work includes illustration, picture books, handicrafts, workshops, stage arts, animation and domestic products. Tupera Tupera were also one of the artists invited to create a special Miffy Statue for the 60th anniversary celebration of the iconic bunny.