Available for newborn to 25kg

If you’re a time deprived parent wanting an eco-friendly disposable nappy option, Naty is your answer.

What we love about these nappies is that they’re as green as they claim and they deliver truly brilliant performance. That makes this one of those incredibly rare products – a win-win for both the consumer and the environment.

Unlike many environmentally friendly products where one forgives a compromised performance for the sake of the planet, Naty nappies
are just as effective as any mainstream brand (and, we would argue,
possibly more…)

In a nappy nutshell, Naty nappies employ cornstarch and 100% chlorine-free pulp as the mainstay of the nappy, unlike mainstream brands that rely on oil-based materials. To aid absorption, Naty also use a small amount of super absorbent granules (widely used throughout the disposable nappy industry). Made from biodegradable materials, completely unbleached, containing no latex, fragrance, or TBT (tributyltin) and hypo-allergenic, they are hands-down winner in the essential baby gear department.

When it comes to using these nappies they are, quite literally, a great fit on babies, with stretchy tabs that fit securely around your baby’s tummy. They are also slightly more slimline than other nappies, making it easier for babies to move about and more convenient to stash in your nappy bag. The range starts from newborn and offers products for children up to 25kg.

Why? This is one product that will be up against your baby’s skin almost 24 hours a day, so you really don’t want to compromise here.

What Parents Love  “I had planned on using reusable eco nappies, but I just kept running out of time  in those early weeks to do all that washing. The Naty nappies saved me from feeling like I had failed my eco principles, and they were so effective I just never went back…” Kathy, Sydney.

Designer Details Marlene Sandberg first thought of establishing the Naty brand 15 years ago when – as a mother, a corporate lawyer and an environmentally concerned individual – she read an article on how every Swedish baby was responsible for half a ton of dirty nappies each year, which were in turn creating an ever-increasing mountain of oil-derived plastic waste that would not biodegrade for hundreds of years. Five years later Naty by Nature Babycare was formed and launched their now much-admired biodegradable and environmentally friendly disposable nappy. Naty now have a collection of baby care products ranging from skincare to wipes and now even a clothing line. 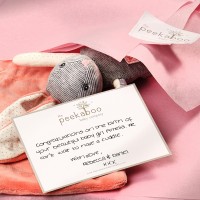 Bottom’s Up with gDiapers & gNappies