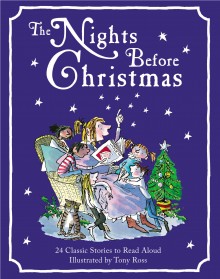 THE NIGHTS BEFORE CHRISTMAS

The Nights Before Christmas

Literary greats including Charles Dickens, Hans Christian Andersen, Louisa May Alcott and Oscar Wilde gather at this sumptuous festive feast of stories and poems that celebrate the season in all its joyful – and poignant – glory.

The true spirit of Christmas – of peace and goodwill to all men – is at the heart of this advent calendar of 24 stories curated from some of the world’s best-love authors and favourite festive tales.

From the classic poem The Night Before Christmas by Clement C Moore that conjures up the excited anticipation of Christmas Eve to the leaping lords and milking maids – and of course the Partridge in a Pear Tree – in The Twelve Days of Christmas, from the poetic serenity of Christina Rossetti’s In The Bleak Midwinter to the uplifting benevolence of Good King Wenceslas bringing joy and generosity to his subjects.

Never did the word ‘treasury’ ring more true than in this glorious tome filled with classic tales of pure gold. Bursting with a gamut of emotional narratives that veer from triumphant to poignant, they will warm the heart as much as they pull at its heartstrings

There are thought-provoking stories that bring into focus the stark gulf between the haves and the have-nots with Hans Christian Anderson’s poignant little match girl, the hardship of the sisters in Little Women and the sorry tale of The Fir Tree, who failed to recognise the joyful moment of its life until it is too late.

Each entry is brought to vivid life by Tony Ross’s evocative illustrations in his distinctive scratchy, scraggy style that gives the images a delightful fluidity and naturalness.

With extracts from staples of the season including Dickens’ A Christmas Carol and cantankerous miser Ebenezer Scrooge with his “Bah, humbug!” to the icy exploits of The Snow Queen, there’s also acts of kindness in The Elves and the Shoemaker and redemption for The Selfish Giant.

Alongside some well-known stories, there are also some less familiar, including The Wizard of Oz author Frank L Baum’s story about a kidnapped Santa, and a wonderfully playful letter written by Mark Twain to his daughter Suzy to show the extravagant lengths some parents will go to perpetuate the magic of a visit from Santa.  Children will also love the slapstick antics of Professor Branestawn’s Christmas Tree and the runaway antics of his wacky invention.

With a handy glossary at the back that gives background to each of the illustrious featured authors and puts the story into its historical and social context, this is a wonderful compilation of Christmas stories and poems to enjoy together that deserves to become as much a part of your festive family traditions as mince pies and chocolate coins.

Fun fact Yes Virginia, There is a Santa Claus was published in New York newspaper Sun in response to a letter written by eight-year-old Virginia O’Hanlon in 1897 when she asked whether Father Christmas really existed. The article became famous, and has now become the most reprinted article in English ever. Virginia received letters about it throughout her life, and her original letter is still in existence.

Did you know? On Christmas Day 1914, British, French, Belgian and German soldiers held an unofficial ceasefire across the Front. Soldiers came out of their trenches to exchange gifts and shake hands; some troops even played football matches in no-man’s land – a moment of peace and brotherhood during a desperate and bloody war.

Author notes Tony Ross was born in Wandsworth, South London, a year before the Second World War broke out. His family moved to Cheshire during the war to escape the Blitz. As an only child, Tony spent long hours amusing himself by drawing and painting. Later, he went on to study at Liverpool Regional College of Art, where he spent a lot of his time frequenting the sixties beat scene and listening to live music. After graduating, Tony went into advertising and became an Art Director. He left to teach design and typography, and started drawing cartoons for magazines such as Punch. Tony has now been writing and illustrating children’s books for many years and has over 1,000 books to his name, including the much loved Little Princess series. He has illustrated stories by authors such as Michael Rosen, David Walliams, Francesca Simon, Jeanne Willis and Lynne Reid Banks.