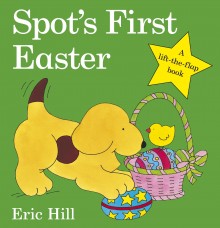 Imagine the excitement of your very first Easter egg hunt. Spot is in his usual intrepid explorer mode as he playfully seeks hidden treasures in this charming lift-the-flap book.

Lift-the-flap interactive books are very much a stock-in-trade for today’s toddlers who love to get tactile and touchy-feely with their hands. But whilst it’s an everyday format now, it was highly innovative when a little puppy played hide-and-seek in Where’s Spot? in 1980.

The light-bulb moment for graphic designer Eric Hill came when he was watching his young playing with some simple paper engineering on an advertisement that Hill was working on; seeing how his son loved lifting the flap to investigate what was underneath (it was actually an image of a man wearing a bowler hat, who was bald when you lifted his hat) got Hill thinking how this simple format might translate for a children’s book.

The result was Where’s Spot, a book that transformed the children’s market with its interactive hands-on appeal. And of course, it helped that the central figure was an adorable puppy.

Spot is one of the world’s best loved – and most instantly recognisable – storybook heroes, loved by toddlers everywhere. Why? Maybe it’s his insatiable zest for life, his boundless enthusiasm and his playful curiousity – all traits that your average toddler
can identify with.

First published in 1988, Spot’s First Easter follows the familiar winning lift-the-flap format, as Spot is joined by his friend Helen the hippo and the Easter bunny on a hunt to find six hidden eggs. His quest leads him to look under bushes, flower pots, up trees, inside sheds, under cushions and stairs until each one is discovered.

Along with element of surprise that toddlers love, there’s also some useful counting practice, and lots of amusing details to spot and encourage discussion, like the mouse hiding under the stairs and the Easter bunny peeking cheekily from various hiding places – but those big ears are a bit of a giveaway!

Hill also pays special attention to detail, adding decorative touches to inanimate objects, so the front door to Spot’s house has a half-moon window above it, the staircase has a fancy balustrade and the chair and table have ornate curved Regency-style legs – this is clearly a design-loving family of pooches!

The biggest appeal of the Spot books is the endearing nature of the playful yellow pup himself. These doggy tales exude a charming innocence and have a soft, gentle humour that is perfectly pitched for a preschool audience.

In each adventure, Spot ventures out on a voyage of discovery while his responsible adult (often Mum) keeps a keen eye on all proceedings from a safe distance, but is always on hand to offer cuddles and reassurance when needed. Which is pretty much what every playful pup – and intrepid toddler – needs.

Test your knowledge Which other well loved picture book character was inspired by the author’s young son? Find the answer here.

Fun fact Spot’s silhouette is based on the design of an airplane. Look carefully and you’ll see the spot on his body and the tip of his tail resembles the markings on an aircraft. (Hill grew up drawing airplanes, and dreamed of being a pilot).

Did you know? Ever wondered what breed of dog Spot is? According to author Eric Hill, Spot falls somewhere between a hound because of his spots, and a golden retriever. Spot’s adventures have been translated into translated into 60 languages, with our canine hero assuming a variety of monikers, including Dribbel (in Holland), Tippens (in Sweden), Bolinha (in Portugal) and Tassen (in Norway).

Looking for more Easter ideas? Check out our 12 We Love… Easter Inspiration.

Author notes Eric Hill (1927-2014) was born in North London and lived there for many years. He started his artistic career as an art studio messenger and from there went on to become a cartoonist and eventually an art director at a leading advertising agency. In 1978, Eric made up a story about a small puppy to read to his son at bedtime and Spot was born. The success of his first bestselling lift-the-flap classic Where’s Spot? in 1980 convinced him to become a full-time author, and his Spot books have been enjoyed by children around the world ever since. In 2008, he was awarded an OBE for services to children’s literacy.