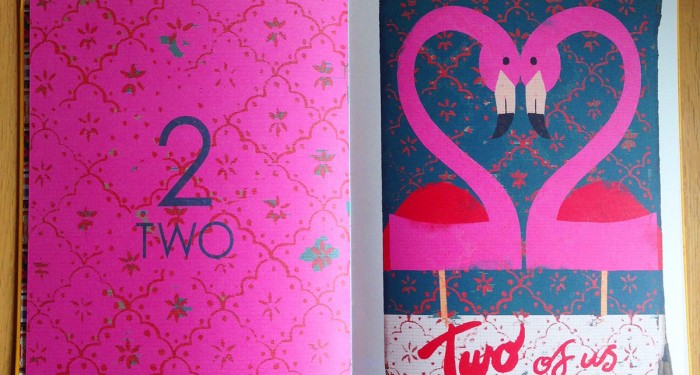 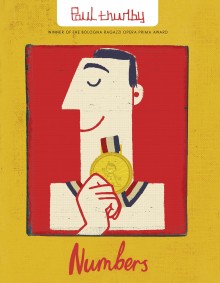 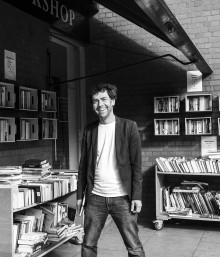 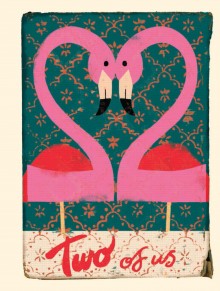 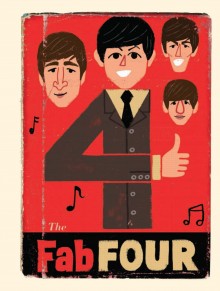 When it comes to graphic art and design, Paul Thurlby is Numero Uno as far as we’re concerned. Let your child marvel at his artistry, and master numeracy into the bargain. It all adds up!

After winning the prestigious Bologna Ragazzi Opera Prima Award for Alphabet in 2013, it seemed only natural for graphic artist Paul Thurlby to turn his thoughts to another of the 3R’s, but it was not a straightforward process.

“It immediately became apparent that attaching meaning to numbers would prove more of a challenge than the alphabet. Not to mention the fact that maths was one of my least favourite subjects at school. I hope I have succeeded, where my teacher Mr Housden failed, in making numbers fun.”

But rise to the challenge he did and we’re the fortunate beneficiaries of this glorious book that showcases the nattiness of numbers.

From a floating astronaut enjoying the thrill of ‘zero gravity’ to a breathless cyclist giving ‘100 per cent’, Paul Thurlby’s artistic expression delivers a delightfully witty take on digits.

Each double page spread features the number, accompanied by a picture. For example, we have a proud looking winner flaunting his gold medallion – obviously, for his being Awesome, since the medal features the ‘A’ from Thurlby’s previous book – or a duet of pink flamingo lovebirds nuzzling beaks in ‘the two of us’.

Other highlights are the Fab Four, starring the Beatles, a quiffed dude give a salutory High Five, an angelic looking cat (complete with halo) with Nine Lives, a scooter sauntering at a 20 Mile per hour pace, and a disco glitterball celebrating the glam rock kitsch of the 70s.

Each page is a work of retro-modern art. Thurlby says his inspiration comes from Mid-Century design and illustrations, and he uses a mix of vintage papers and postcards, scouring second-hand bookstores and charity shops for old books to inspire his creations, often just to use one small design detail.

Whilst we’d never advocate abuse, this is one book that you might be tempted to cut up – purely because you want its glorious artwork to adorn your walls. But don’t be too hasty: Thurlby also creates graphic prints for just that purpose! His designs also feature on a range of products by Wild + Wolf, including Alphabet Dominoes.

Fun fact There are lots of different names for the digit ‘0’, including zero, nought, naught, nil, zilch and zip. At the other (never-ending) end of the scale, what comes after a million, billion and trillion? A quadrillion, quintillion, sextillion, septillion, octillion, nonillion, decillion and undecillion. These numbers have not yet been given the Thurlby design touch, but maybe he’s working on it.

Did you know? Paul Thurlby was named after Paul McCartney because his mother was a huge fan of The Beatles. Perhaps that’s why Paul is depicted most prominently in the image of the Fab Four with a big beaming smile, giving readers a resounding thumbs-up.