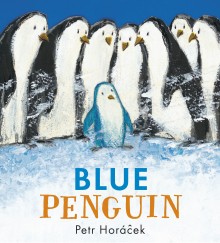 When a little penguin whose coat is as blue as bright sapphires arrives in a penguin colony, he is regarded as something of a novelty. Will the rest of the penguins ever accept him as one of their own?

Standing out from the crowd is not to everyone’s taste and all Blue Penguin wants is to fit in. In a black and white world, his azure feathers mark him out for all the wrong reasons, even in a snowy blizzard.

With his diminutive stature, little Blue Penguin cuts a sad and solitary figure, as he is ostracized for no other reason than the fact that he is different.

Birds of a feather stick together? Not this rookery of mean-spirited black and white penguins who refuse to accept the penguin just because he is not of their monochrome ilk, leaving one Blue Penguin feeling very blue indeed

Feeling dejected, Blue Penguin finds solace from his isolation in his dreams, where he is comforted by a magical whale song. When he wakes, he sings the song and discovers that it holds special powers. Soon another young penguin is enchanted by the wonderful melody and Blue Penguin finds his first friend.

Soon, the entire colony are (metaphorically) dancing to Blue Penguin’s tune and make amends for their previous poor treatment by embracing him as one of their own.

On his blog, Horacek says the book was inspired by (and is dedicated to) his friend Richard. “He was very different from everybody else I know,” says Horacek. “He used to say and do exactly whatever he wanted to say and do at that moment. Behaviour like this could get him into a trouble from time to time, of course, but Richard didn’t mind. He was used to be different. Richard was fun to be with and I liked being his friend.”

In this book, Blue Penguin stays true to himself and soon the other penguins realise that he is fun to be with, which gives a powerful message that it’s OK to be different.

A thought-provoking tale of friendship and acceptance that will appeal to children who enjoyed the story of Mumble in Happy Feet – another penguin who doesn’t fit in (those penguins can be a mean bunch when someone is a bit different – maybe it’s something to do with the chilly climate?).

Horacek’s delightful illustrations have a collage style reminiscent of Eric Carle with some wonderful mottled and speckled effects that bring the story to vivid life. The rich palette also evokes the chilly climate with cool blue and white tones bringing an icy Antarctic touch with flashes of deep green sea and a golden orange sun, while the ultimately happy ending brings a warm glow.

Fun fact Penguins’ distinctive black and white ‘tuxedo’ appearance is called countershading and works as camouflage. A ‘penguin suit’ is also a nickname for a man’s formal evening suit of a black dinner jacket worn with a white shirt.

Did you know? Penguins living in cold climates have a layer of fat called blubber under their skin and a fluffy layer of feathers covering their skin to keep them warm. When it’s really chilly, they are also known to huddle together in large groups to keep cosy and warm.

* More about penguins * Fancy a penguin playmate? You’ll love Pingy the Penguin. And check out our review of more loveable penguins in Oliver Jeffers’ Lost and Found and Rob Biddulph’s Blown Away.

Author Notes Petr Horáček trained at the Academy of Fine Arts in Prague before becoming a graphic designer, illustrator and painter. He won the Books for Children Newcomer Award with Strawberries Are Red and What Is Black and White? With a veritable treasure trove of children’s picture books to his name, he is perhaps best known as the creator of the loveable Suzy Goose character who has featured in Look Out Suzy Goose, Silly Suzy Goose and Suzy Goose and the Christmas Star. He has also written the beautiful Butterfly Butterfly: A Book of Colours and Puffin Peter, as well as the delightful The Mouse Who Ate The Moon. Born in Czechoslovakia, Petr now lives in Worcester with his wife and two daughters.