Almost imprinted upon the subconscious of British children’s memories of mealtimes are the playful rabbits of the Bunnykins collection by Royal Doulton.

While the original designs – drawn by the then-managing director’s daughter, Mary Barbara Bailey – were released somewhat informally onto the market in the early 30s, there were a total of 61 different scenes that had been launched by 1940 all signed by the pseudonym ‘Vernon’; Mary was a nun and it was against the convent’s policy for her to be doing work outside the convent. In the late 40s, Walter Hayward became the chief designer of the Bunnykins collections, and he produced nearly 100 designs in all (the distinctive trademark of his images being a cheeky mouse and livelier scenes).

From rabbits aboard rafts or hard at work at school to building a bonfire or watching television, the classic Bunnykins scenes have been a daily delight for almost two generations of children, as spoonful by spoonful the characters are uncovered at breakfast, lunch or dinner

In the mid 1930s, Queen Elizabeth, the Queen Mother, ordered pieces for the princesses Elizabeth and Margaret, and the popularity of the product soared. In 1984, Walter created a design to commemorate the visit of the Princess of Wales to the Royal Doulton factory when she was presented with a handpainted plate and mug for two-year-old Prince William.

These days, there is a significantly smaller collection officially available, with only a handful of designs still being produced by Royal Doulton; many of them now in melamine. But these are still a classic for any child’s mealtime. For the widest selection, try your hand at bidding on ebay, or you can opt for the much-truncated collection of designs now available through a Royal Doulton stockist. 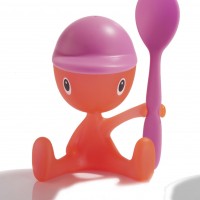