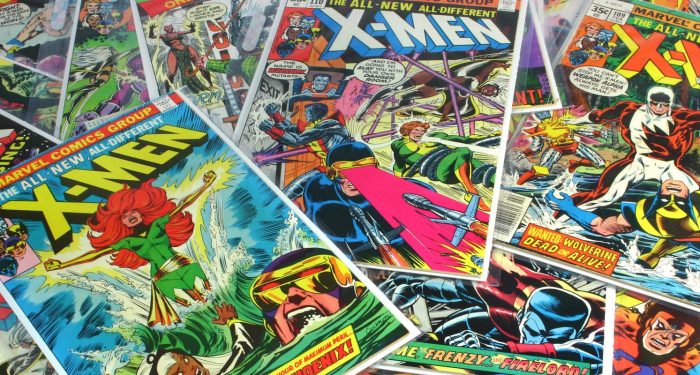 Adults: from £17.50.
Kids go free! Please note that two children aged 10 and under go free with an adults entry ticket. 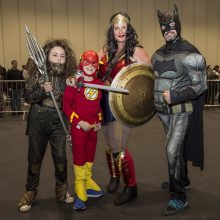 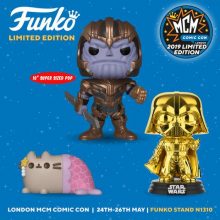 The nights are getting bolder, the days are getting colder – but the light on the horizon is this season’s London Comic Con will soon be upon us!

After weeks of hard labour and getting back in the swing of school life after the summer holidays, we all deserve a well-earned break. And that’s just what October half-term is designed to do! And what better way to enjoy some family time together than to mosey on down to one of London’s biggest gathering of geekdom?

Here’s a sneak preview of what’s in store:

Just in time for a freakish Hallowe’en, the teen stars of ‘It’ Chapter One and Two – Sophia Lillis, Wyatt Oleff and Jaeden Martell – will be appearing, chatting about the latest movie, signing autographs and posing for pix (additional fees apply). Time to cosplay in your finest 80’s glad rags and get ready for some pop culture references with all those things you – or your parents – remember from the rocking era that brought us Pac-Man, leg-warmers and Live Aid!

The Art of Harry Potter

We have long been fans of the exquisite artwork in the Harry Potter films, from the signage of the shops in Diagon Alley to the graphics in newspapers and posters. The master graphic artists responsible for these wondrous affairs – the nattily monikered Mina Lima aka Miraphora Mina and Eduardo Lima – will be hosting workshops and spilling secrets on how they created some of the most-loved graphic props from the Harry Potter and Fantastic Beasts film series.

A highlight of Comic Con is always the chance to meet-and-greet stars of stage and screen. With his screen credits including cult classics Star Trek and Star Wars, as well as fan favourite Hot Fuzz and Shaun of the Dead, Simon Pegg is a must-see, while video game icons like Nolan North, Bryan Dechart and Amelia Rose Blaire also makes appearances.

As always Funko‘s got you covered with more exclusive pop vinyl than you can shake a shake thing at. This year’s exclusive include specials from Thanos to Darth Vader, Hedgwig to Robin and more.

Need an excuse to dress up in crazy outfits and make-up? Not at Comic Con, where literally anything goes! The hub for all that is good and geeky is summed up best by Comic Con themselves: “Whether you’re a professional cosplayer or just getting started with your first costume, Cosplay Central has all the tips, tricks, and help you could need! ” Yes, in other words, everything welcome and anything goes.

The family who plays together, stays together and there’s plenty of scope for playful family fun. Chill out at “The Treehouse”, Workshops and Fan Meets, dress up as a Marvel family or just find a comfortable spot – there are giant floor cushions at various locations on the site – and watch the crazy Comic Con world go by.

Need a little more enticement? Check our more reasons why you must go to Comic Con with our feature ‘What’s so cool about Comic Con’ 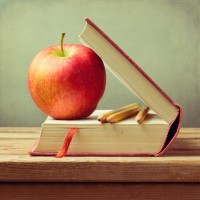