The entrance opposite Grand Union Station

Olvera Street is the place where the city of Los Angeles began – a colourful piece of Spanish history that sits in the heart of downtown LA!

Quite literally one small block, Olvera Street is a joyful, noisy and colourful celebration of the original Spanish Pueblo de Los Angeles settlement.

The perfect spot to pick up a colourful piñata, a leather gaucho hat, a flamenco dress or Day of The Dead mask, Olvera Street may be touristy, but it’s still a fun piece of the cultural puzzle that is the city of Los Angeles

Established by Spanish settlers on the fringes of an Indian village in the 1700s, the street has undergone many changes. Take a free 50-minute tour (Tuesdays through Saturday) with the Las Angelitas del Pueblo civic group to learn about the history. Or simply drop in to the Avila Adobe, which sits on the Union Station side of Olvera Street.

Built in 1818 by Francisco Jose Avila (the mayor or Los Angeles in 1810) when the state was still under Spanish rule, Avila Adobe was variously commandeered as a military headquarters by the invading North American army under Robert Stockton, used as restaurant and then a rooming house for transients before being condemned in 1926 by the City Health Department. Thankfully, local luminary Christine Sterling began a public campaign that saved the building and it is now a museum recounting the neighbourhood’s history.

Today the main attractions are the two rows of market stalls (think Mexican wrestling masks, handmade crafts and accessories and beautiful Spanish dresses) the restaurants featuring Mexican cuisine, as well as mariachi musicians and Mexican dancers. For the most flamboyant performances and celebrations, arrive on one of the Spanish holidays – Los Tres Reyes, Blessing of the Animals, Los Angeles City Birthday, Cinco de Mayo, Mexican Independence Day, Dia de los Muertos, the Day of the Virgin of Guadalupe and Las Posadas. However, any day of the year feels festive here…

Why go This is where it all began, baby! Plus it’s colourful, cultural and fun – for half an hour or half a day!

Who is it best for Culture vultures who don’t mind a bit of touristy kitsch.

Top tip Don’t feel nervous about arriving here by public transport – the entrance to Grand Union Station is directly across from Olvera Street – and be sure to leave enough time to take a walking tour around the downtown area while you are here (see While You are In The Area, below).

Facilities Toilets are located in the main square under the round pagoda and there are plenty of restaurants for snacks large and small.

Highlights for kids Probably the scariest mask or the most colourful dress at the market stalls or in the shops. However, they will also be lured by the promise of a caramel-filled churro from Mr Churro’s.

While in the area Visit on a Sunday, and you’ll see the hive of activity that is La Placita Church in The Plaza. Dedicated in 1822, this official California Historical Monument now has approximately 10,000 weekly attendees. And don’t miss out on the fabulous modern landmarks that are within walking distance too. The Walt Disney Concert Hall is only a few blocks away, and nearby Grand Park is a wonderful space for children to enjoy an (unofficial) splash in the shallow fountain while parents partake of a coffee in the square. 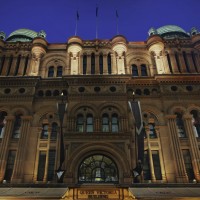