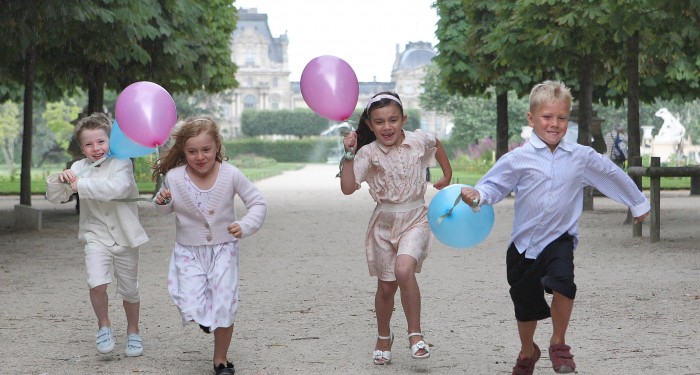 Situated in the 1st arrondissement of Paris, one of the oldest areas of the city, on the right bank of the Seine. 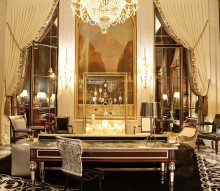 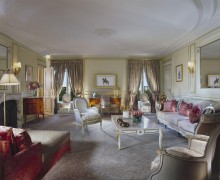 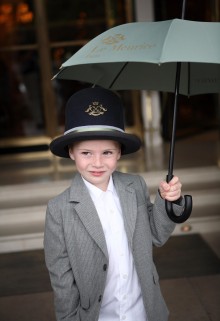 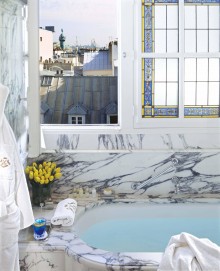 Languishing handsomely on the Rue de Rivoli, one of Paris’s most prestigious and fashionable addresses, Le Meurice is a super-grand hotel steeped in Louis XIV glamour.

Celebrating its 180th anniversary in 2015, Le Meurice has an enviably illustrious past. Eminent guests from days gone by include Picasso, who hosted his wedding dinner there, Coco Chanel, and Salvator Dali, who once demanded a herd of sheep be brought to his room and, upon their arrival, took out his pistol and shot at them with blanks bullets. More modern celebrity patronage comes in the form of Beyonce, Kim Kardashian and Kanye West.

And whilst your teens might appreciate the superstar clientele, younger guests are unlikely to give a hoot. Thankfully, the wonderful Meurice adds plenty of thoughtful little touches to appeal to them, too.

What is undeniable is the hotel’s prime location in the heart of Paris with the Louvre museum on your doorstop, and les Jardins des Tuileries as your neighbour. The beauty of Paris is that it is such a compact city: you can get around easily on foot, and take in its stunning architecture and admire the effortless chic of the locals.

Le Meurice is so posh that even the rubber ducks wear crowns. By Joe’s bed, there was a junior-size towelling robe, a cute pair of fluffy dog slippers and a soft toy, Pistache – the hotel’s mascot, plus a goody bag stuffed with a mini Paris passport, a spinning Eiffel Tower and a board game.

There is so much to see and do in Paris that it’s worth rising early. Another incentive for to be up with the larks is that you can be the first to put your artistic touches to the huge blank canvas made of ice hanging in the foyer: by the end of the day, it’s covered with handprints, squiggles and doodles, and, in our case, autographs enclosed in love hearts.

As befits the fine surroundings, furnished with ornate mirrors and gilt-edged chairs inspired by the Salon de la Paix at the Château de Versailles, breakfast is a grand affair in le Meurice restaurant.

Joe was fascinated by the waiters busily steam-ironing the impeccable tablecloths – a spectacle he’s unlikely to witness at home! He also loved having his boiled eggs delivered in a giant silver lidded platter, which the waiter whisked away with a suitable flourish. I appreciated the muslin-covered lemon that arrived with my smoked salmon, lest an errant pip or squirt of juice should fly in my eye.

We also enjoyed a decadent Tea Time Gouter one afternoon, where Marie Antoinette’s famous quote “Let them eat cake!” came to mind. Showcasing the talents of resident head pastry chef, Cedric Grolet, we were treated to a succession of delicate little cakes and tarts, candy-coloured macaroons, scones and jam, sweets… For the highest of haute cuisine, book a table at Le Meurice restaurant where food is prepared under the culinary wizardry of three- Michelin starred chef, the legendary Alain Ducasse.

In keeping with the glitz and glamour that Le Meurice exudes, decor is opulent and luxurious. Each of the seven floors has a distinct style, with 160 beautifully appointed rooms decorated in the elegant style of Louis XVI. All rooms feature exquisite marble bathrooms with shower and bath – complete with majestic rubber ducks!

Le Jardin des Tuileries, the pretty park famously captured in Renoir’s Impressionist paintings and where Oscar Wilde wrote “the children run like little things of dancing gold”, is just across the road and is a lovely space to take a leisurely wander.

There’s also a funfair with a huge Ferris wheel (as seen free-wheeling in The Smurfs 2 movie), and a playground with rocking horses and a mini witch’s hat with dangling swings. There was also a big shiny silver satellite dish you could sit on, like a giant boule, which seems fitting in the park which is famous for silver-haired Parisians playing petanque in the early evening.

There are deckchairs for dozing and grassy areas for a picnic or a crepe au chocolat picked up from one of the vendors. The only downside is the gravel paths, which become very dusty in the heat – very inconvenient if you’re wearing open-toe sandals! Expect the wheels of your pushchair to require a good dust down afterwards.

If you fancy sight-seeing Le Jardin des Tuileries on wheels, Le Meurice will lend you bikes or a pistachio-coloured scooter with doggy footprint motif in honour of Pistache. Or borrow the toy boat, tucked away behind the concierge’s desk, to sail on the pond

Visiting in July, the city was very humid and, after a few sunny days, we could tell we were due for a storm when we saw the dramatic near-black sky reflected in the glass of the Louvre pyramid. We arrived back at our suite just as the heavens opened, and watched dramatic flashes lightning up the sky over the Eiffel Tower and Les Invalides in the distance.

Fierce winds were also whipping up sandstorms in Les Tuileries making the gardens, and even the Eiffel Tower, disappear in a huge clouds of dust worthy of the OK Corral. Grace loved the spectacle, but Joe cowered under the bedsheets. The next morning, he opened the curtains with trepidation in case the Eiffel Tower had disappeared for good.

The sights of Paris

The city has more than its fair share of wonderful museums and art galleries, but children can get tired and crotchety wandering round, especially in very crowded spaces like the Louvre.

But of course you have to see the Louvre Museum‘s most famous exhibits, the Mona Lisa (smaller than you’d imagine, and behind glass with crowds of happy snappers) and the one-armed Venus de Milo statue, though Joe most enjoyed running around the piazza in front of the Pyramid. For fans of Impressionist art, le Musee d’Orsay is a must – and train enthusiasts will enjoy the references to the Beaux-Arts building’s former life as a railway station.

Another striking building filled to its multi-coloured rafters with modern art is the Centre Georges Pompidou at Les Halles, a wonderful pedestianised area with buskers and street entertainers. In the same district, tucked away in a cute cobblestone side street, is the quirky doll museum Musee de la Poupee, that chronicles the history of dolls from porcelain to plastic – there’s also a doll clinic for antique dolls and plush animals repairs, hospital material, outfits, and accessories.

Some of the most fun we had was just taking to the streets with no itinerary in mind. We explored the shopping opportunities at St Germain and Les Halles and walked from the Eiffel Tower along the Seine (sighing at the Pont de L’Alma where Diana, Princess of Wales died), round the top of the chic fashion headquarters of Chanel and Dior behind the Arc de Triomphe and down the Champs Elysees, dodging the traffic at the Place de la Concorde.

Every year, from around July 20 til August 17, the riverside thoroughfares are transformed into car-free resort for four weeks, and you can indulge in a semblance of beach life in the city at Paris Plages – expect Seine-side sandy stretches, deck chairs and ice-creams. The beaches are spread across three spots (Louvre/Pont de Sully, Port de la Gare and Bassin de la Villette).

Joe probably has the most fun when we trekked out to the Jardin D’Acclimatation, on the outskirts of Paris (Bois de Boulogne, 75016 Paris). The historic park has been open since 1860 has a funfair, hall of mirrors, playground, a water fun park (where Joe got soaked dodging the fountains) and a miniature railway.

You can’t visit Paris without shopping, even if it is just looking dreamily in the windows. For famous department stores,  Hausmann Boulevard houses Galeries Lafayette and Printemps; Grace loved the fashion and make-up, while Joe’s payback came when we discovered the toy department at Galeries Lafayette. At Bon Marche Rive Gauche, Grace slipped into myriad coloured Louboutins, decorously lined up like Barbie shoes, while Joe slept in his buggy. Handily, Square Boucicaut, just opposite Bon Marché, has an enchanting little playground where Joe let off a little steam, while I watched Paris’s bon chic, bon genre infants at play.

For a grown-up style-fix, head to Paris’s coolest concept store Merci at 111 Boulevard Beaumarchais. The brainchild of the former owners of Bonpoint, expect all the style the French are renowned for in fashion, furniture, books, interior design – and then some. The Bonpoint flagship store at rue Tourneau, where you can ‘ooh’ and ‘aah’ over the gorgeous pint-size garments and indulge in afternoon tea in the pretty courtyard garden, is always worth a pitstop.

Why go Come on, this is Paris!

Who is it best for Families who love the finest cities in the world and its rich history, culture, fashion and Parisian chic.

Our Favourite Bit The small and compact nature of the city centre means it’s easy to navigate on foot, which means you really get to see the sites and those chic natives (though some of the cobblestone streets can be hard on tootsies, and pushchairs).

Top Tip Don’t overload your itinerary with cultural hotspots and take time to savour the city’s pretty parks and green spaces, including the Jardin des Tuileries, which has a puppet theatre, swings and model boats on the ponds, and the Jardin de Luxembourg, which has a playground, puppet theatre,  pony rides, swings, tennis, and model yacht hire to sail in the large pond. There’s even a crèche from May to mid-September for children aged 18 months to 6 years.

Don’t Go If you’re not happy to say ‘Au Revoir’ at the end of your trip (Don’t worry, it doesn’t mean ‘farewell’ – it’s simply ’till we meet again.’)

While You’re There Seek out a little secret piece of New York in Paris! There is a 35-foot replica of the Statue of Liberty on a tiny island on the Seine called the Île des Cygnes, just next to the Pont de Grenelle. The link? The Statue of Liberty, created by Frédéric Bartholdi in 1884, was a gift from the people of France to the United States.

** MORE ON PARIS ** Here’s where to sup the finest afternoon tea or munch on chocolate delices, or take to two wheels and the city on a Blue Bike Tour 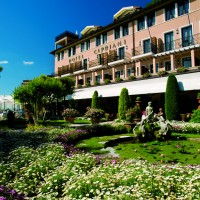 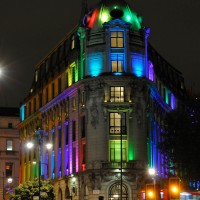