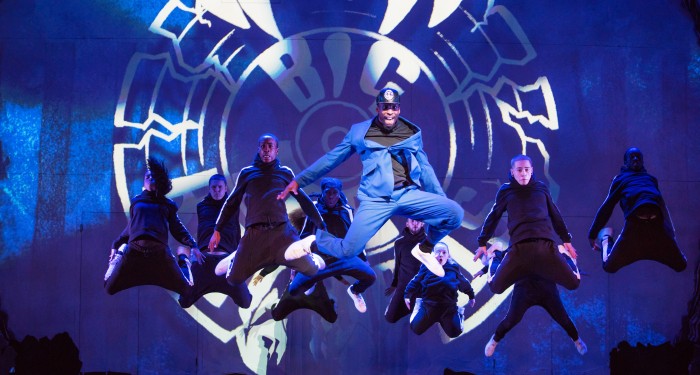 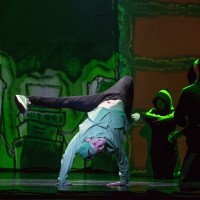 INTO THE HOODS REMIXED

2 hours 10 minutes (including a
20-minute interval) 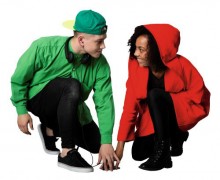 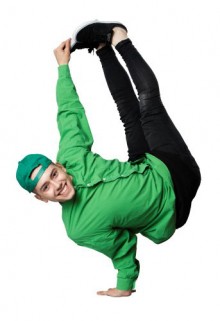 Into The Hoods: Remixed
*

Once upon a time, there was a group of talented young dancers who got together to create a fairytale with a difference, packed with high-energy contemporary dance moves and a whole lot of hip hop…

That was back in 2006. Since then, Into The Hoods has won numerous awards and became both the first ever hip-hop dance show in London’s West End and one of the longest running dance shows in West End history. Now it’s back in a Remixed format, with brand new choreography, a fresh soundtrack and a cast of young and upcoming dancers.

A host of familiar characters are given a radical face lift in this energetic mash-up of fairytale favourites. Tradition is sidestepped – or should that be turned on its head in a nifty break-dance move – as we meet the cast of instantly recognisable characters with a twist: Spinderella, Lil Red, Rap-on-Zel and Jaxx all bearing traits of their fictional forebears, but with a witty update on their names.

Into the Hoods Remixed puts the groovy into Grimm and the funk into fairy tales. But don’t expect to just sit there. As they point out at the start of the show, this is hip hop theatre and you’re invited to make some NOISE. Just one question: will it all end happily ever after?

The story begins with a fairytale stock-in-trade: two young children, lost and alone, in a scary forest evocatively created with strange dark dancing shadows. Note: the opening also features a dark silhouette singing a rather creepy ‘If you go into the hoods today’. Thankfully, this is as scary as the show gets; the rest is played for laughs – even when Wolf disguises himself as Grandma.

The children find themselves on the Ruff Endz Estate, where the landlord says he will help them find their way home in return for a favour. It’s his daughter Rap-on-Zel’s birthday, and he would like the children to procure some 21st century presents for her: an iPhone as white as snow, a hoodie as red as blood, weave as yellow as corn, and trainers as pure as gold.

So begins the children’s mission as they mingle with the locals and the audience get to know the backstory of the characters, including some kick-ass females. Spinderella (Lucinda Wessells) is a vinyl-spinning DJ, Rap-on-Zel (Jade Hackett), with her long locks circling her waist like a golden python, is a vivacious rapper MC, while Lil Red (Natasha Gooden) is a singer who has misguidedly signed a contract with Wolf, the manager of Big Teef Records.

Meanwhile, Jaxx (Corey Culverwell) who lives in the Basement (a jokey reference to 1990s British electronic music duo) is a down-on-his-luck music producer struggling to pay the rent. He also has a love interest with Lil Red, while Rap-on-Zel’s head is turned by the brash Prince – playing to the crowds with his over-the-top wannabe celebrity persona.

The amusing storyline trips along nicely with a good few laugh-out loud moments, but it’s the acrobatic spins and twirls, leaps and somersaults that really leave the audience spellbound. But don’t be surprised if you also find yourself caught up in the emotional aspects of the story too – in the final scenes, we definitely felt sorry for Jaxx and Lil Red, which has to be testament to their acting ability as well as their amazing dance talent.

So what if you don’t think you’re hip enough for hip hop theatre? You may be surprised at how many tunes you recognise. Alongside blasts from Massive Attack, Jay Z, John Legend and Pharrell Williams, the soundtrack also includes sing-along classics like Shalamar’s A Night To Remember, Whitney I Wanna Dance With Somebody and Kool & the Gang’s Celebration – even Boyz II Men get a look in with a comedy smoochie moment with I’ll Make Love To You.

Will Jaxx manage to pay the rent? Will Spinderella got to the ball? Will the lost children find their way home? Into the Hoods Remixed is hip, it’s cool and it’s great family fun, but it is also still a fairy tale at heart. And we all know how a good fairy tale always ends. Happily Ever After.

Why go? To see the traditional format of fairy tales high-kicking and screaming (well, they did say ‘Make some noise!) into the 21st Century.

Who is it best for? Families who enjoy the comedy of pantomine crossed with an energetic dance spectacle.

Top tip Practise your wolf whistles or foot-stomping as a more tonsil-friendly way of showing your approval – Joe cheered so enthusiastically during the standing ovation at the end of the show that his throat was hoarse the following day!

Our favourite bit The soundtrack is the perfect mix of golden oldies and contemporary tracks – and it’s fun to discover that the whole family recognises the same songs (I remember seeing Kung-Fu Fighting on Top of the Pops in the Seventies, while Joe recognised it from Kung Fu Panda).

Don’t go If you’re not prepared for your child to feel inspired and want to try out a few of those fancy hip hop moves at home.

While you’re there If you have time, schedule in a Charlie and The Chocolate Factory-inspired Afternoon Tea at One Aldwych. The kids will love the magical smokin’ mocktail and the sweet treats.

Did you know? The red hood in Little Red Riding Hood was introduced by French author Charles Perrault, known as the ‘father of the fairy tale’ in Tales Of Mother Goose (1697). Perrault claimed the moral of his story was that children “do very wrong to listen to strangers”.

Fun fact As well as being famed for his beanstalk climbing and giant-slaying ways, characters named Jack appear in well-loved nursery rhymes, trekking up the hill with Jill and nimbly jumping over candlesticks. Jack also ranks high in the UK as the most popular boy’s name. Languishing in the top spot for over a decade, Jack was recently nudged into the No 2 position by Oliver.

Theatre notes ZooNation is a groundbreaking hip-hop dance theatre company, bringing together a professional dance company with training and performance opportunities for young people. ZooNation Dance Company was founded in London in 2002 by director and choreographer Kate Prince. In May 2010, ZooNation became a Resident Company at Sadler’s Wells and Kate Prince became an Associate Artist. The company’s main focus is creating pieces of full-length narrative hip-hop dance theatre.