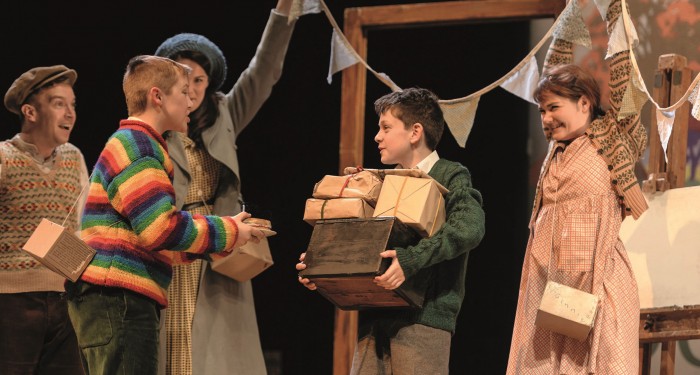 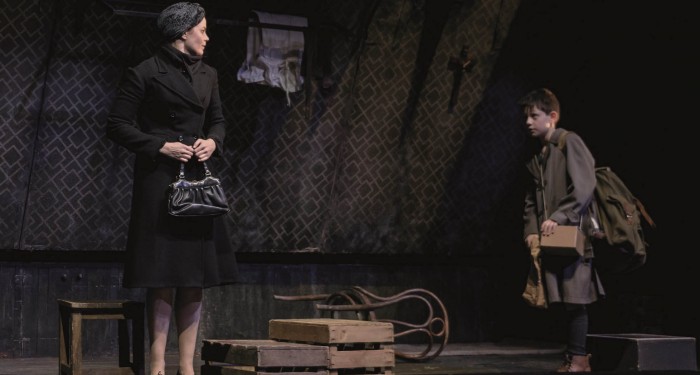 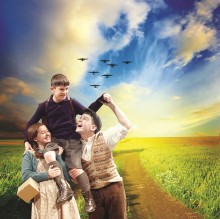 2 hours and 15 minute, including interval 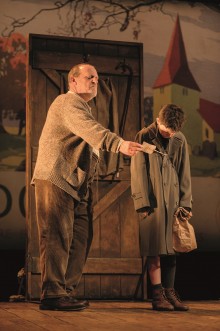 On the road to learning
 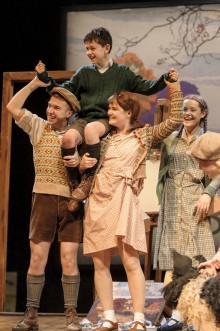 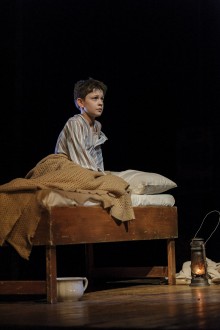 Sleeping on – not under – the bed

Evacuated from London during World War II, a young lad finds himself in the home of curmudgeon geriatric and finds unexpected friendship and love for the first time in his life. When he is summoned back to London, could his chance of having a happy childhood be slipping away for ever?

Adapted from the award-winning novel by Michelle Margorian, Goodnight Mister Tom is a powerful and poignant story that gives touching insight into the life of William Beech, evacuated from the bustling city and plonked in a rural setting where everything feels alien.

With head down and shoulders slouched, young evacuee William cuts a sorry figure. His temporary guardian, whom he dubs Mister Tom, is shocked by the physical scars on William’s frail body, and the emotional scars in his fragile heart – and the audience feel it too. Seeing William grow and prosper, before our eyes, in health and self-esteem is a joy but is it too much
to hope for a happy ending?

While the grown-ups recognise their duty as temporary custodians for the evacuees (doing their bit for King and Country), the local kids are less welcoming, taunting William with disdainful contempt and cruel chants about “vaccy vermin”.

The turning point comes when William meets fellow evacuee, Zach, an exhuberent eccentric with theatrical tendencies and a refreshingly open nature who embraces William’s friendship  – or rather thrusts it upon him. Despite himself, Mister Tom also becomes emotionally attached to the young lad, perhaps seeing in him a fellow outsider, as it forces him to acknowledge the heartbreak and loss in his own life.

Taking William under his protective wing, albeit it in a grumpy, slightly begrudging fashion, Tom teaches William to read and write and encourages his artistic talents by giving him drawing materials owned by his late wife, bringing a certain amount of closure and acceptance into his own life.

Just as it looks like William might finally be able to enjoy the carefree childhood that every child deserves, he is summoned back to London by his sick mother. Here, we discover the shocking extent of his mother’s cruelty, a sadistic tyrannical woman who claims to be religious but clearly has a warped sense of what that means.

In an act of barbaric insanity, Mrs Beech – clearly on the verge of a nervous breakdown – locks Tom and his new baby sister in a cupboard, where they are discovered by Tom who has travelled to London on a mercy mission. As the authorities step in, it looks like the now orphaned William’s chances of having a happy childhood are again in precarious jeopardy.

Thankfully, author Margorian allows us an approximation of a happy ending, albeit it tinged with some additional sadness. Tom is allowed to adopt William so he can remain with his newfound loved ones, but there is still more sadness to come, as William’s friend Zach is killed in an air-raid.

This adaptation, by children’s theatre supremo David Woods, tackles the powerful narrative of Magorian’s novel with sensitivity. Though it has its maudlin moments, there are also glimpses of humanity and humour, mostly from the comedic antics of young Zach and his hammy thespian (mis)quotes.

The cast (some of whom play several cameo roles) bring warmth to their characters – with the notable exception of Mrs Beech, played by Melle Stewart, whose scarily cruel mother is icy rather than warm, and could easily give a boy nightmares. David Troughton gives a suitably gruff-with-a-soft-centre performance as Mister Tom, and special mention must also go to the clever ‘acting’ skills of Sammy the dog, masterfully puppeteered by Elisa de Grey.

The power of Goodnight Mister Tom lies in its poignancy and shocking reality. William’s story is one of deprivation and abuse, but it is also a tale of empowerment and redemption, for both William and Mister Tom.

Just one word of warning: expect a lump in your throat as William calls Mister Tom ‘Dad’ for the very first time – as memorable and heart-rending a moment as Bobbie’s famous words “Daddy, my daddy!” in The Railway Children.

Did you know? The evacuation of children from cities to the countryside to keep them safe from air raids began in the UK in September 1939. The evacuees were all given a gas mask and food for the journey, and wore a label pinned to their clothing stating their name, home address, school and destination.

Fun fact Blackout regulations imposed on 1 September 1939 required all windows and doors to be covered at night to prevent any glimmers of light that might aid enemy aircraft. Blackout regulations during World War II were strict. A man in Bridgend was fined 10 shillings for striking matches in the street as he searched for his false teeth.

Why go? To relive a classic wartime tale that will provide tearful and triumphant moments, as well as a few laughs. It’s also a wonderful insight into a bygone era that will provoke discussion: imagine what it would be like to be sent away from your home and family as a young child?

Who is it best for? It’s a wonderful tale for all the family, but especially good for children who are studying World War II at school.

Top tip If you’re fortunate enough to have grandparents around who lived through the war, take time to hear their wonderful stories and experiences of that time. It will be a real eye-opener.

Our favourite bit Goodnight Mister Tom gives a wonderful insights into the wartime era, from the posters that adorn the set (‘Eat Less Bread’) to the good doctor who doles out health advice for the malnourished William yet always has a cigarette in hand. It also doesn’t shirk the hardship and brutality that young William was facing at home, as well as his initial struggles in a new environment, yet it is an ultimately uplifting tale, too.

Don’t go Expecting an air-brushed view of the life of an evacuee. There’s plenty of gritty realism here.

While you’re there Pop into Waterstones on Garrick Street to browse their wonderful selection of children’s books – and pick up a copy of Goodnight Mister Tom to add to your library of classics!