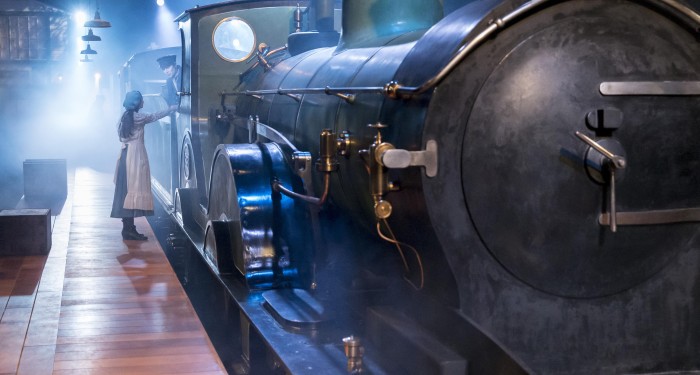 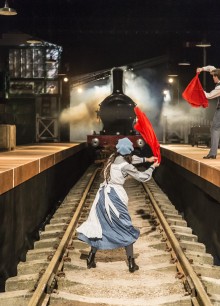 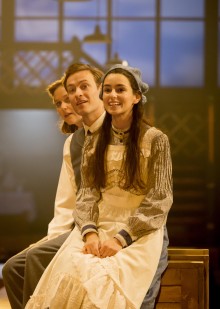 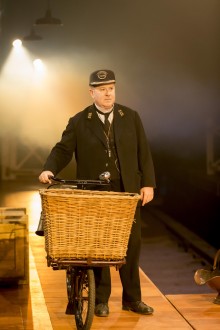 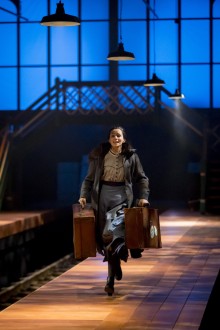 Edith Nesbit’s classic children’s story is brought from page to stage – or rather platform – in the Olivier Award-winning adaptation that stars an authentic vintage locomotion and carriage and some seriously dramatic puffs of steam.

Parents of a certain age are in for a nostalgic chug down Memory Lane with the story of three siblings Bobbie, Peter and Phyliss whose lives are turned upside down when their father mysteriously disappears and their comfortable London life is displaced by a modest existence (ah yes, alas they have to let some of the staff go and make difficult choices “Butter or jam, but not both”) in an unfamiliar rural setting.

Having previously been accustomed to a cosy life of privilege, this is now a family in crisis. Father is absent, Mother sobs when she thinks noone is looking and the children are left to their own devices. These are hard times, financially and emotionally, but the family bond is strong.

They may have been forcefully wrenched from their comfort zone, but these are bright, resourceful children who won’t be beaten by circumstances. They explore their new surroundings like intrepid adventurers, enjoying a free-range existence and making their own entertainment down by the railway tracks. Befriending the local station master, a chirpy Mr Perks, they soon begin a daily ritual of waving at the passengers on the train whizzing off to London. Then one day, disaster strikes: a sudden landslide covers the tracks and a derailment is imminent. Can disaster be averted?

Of course it calls from some heroic quick thinking on the children’s part, not to mention some frantic flag waving, but the Railway Children save the day, becoming local heroes into the bargain.

The story itself has all the making of a Victorian riches-to-rags story, but there are depths to the back story. It’s a coming-of-age tale for Bobbie, the oldest child who still hankers after carefree, childish pursuits, but also acts as a ‘mini mother’ role for her younger siblings. Caught on the cusp between childhood and young adulthood, she is keen to take on grown-up responsibility and try to makes sense of her family’s new situation. But really all she wants is for her family to be reunited again.

It’s an empowering story, too, because the children are at the heart of the action (quite remarkable considering the original book was first published in 1906, a Post-Victorian era when children were still expected to be seen but not heard). Even though some circumstances are beyond their control, these plucky children still manage to become masters of their own fate: rather than adults coming to their rescue, it is their bravery that helps bring about the happy conclusion for everyone.

Alongside the family dynamics, there is also a hint of political intrigue, with the children’s father wrongly imprisoned for selling state secrets, and the family taking in the Russian refugee who has fled is country and is seeking asylum (issues that have resonance for a modern audience, too).

What makes the story really come to life is its authentic setting and the imaginative staging. Seats are allocated on ‘platforms’ and the auditorium is cleverly decked out like a station with notices and left luggage. Grab your ticket now: this is one train
you won’t want to miss!

Everyone – from ushers to ice-cream sellers, lighting engineers and scenery movers – is dressed in authentic Victorian clothes, with the occasional smudge of sooty dirt here and there. The main ‘stage’ is set along a central platform area, complete with decorative fancy wooden fencing. There’s also plenty of cleverly moving parts, with floors that slide to create indoor spaces and domestic scenes, as well as a dramatic ‘tunnel’ scene where the gripping adventure takes place with shadows and torchlight.

The star of the show is undeniably the magnificent steam engine itself, originally built in 1896 and on loan from the National Railway Museum in York. The train plays its part to perfection, obliging with magnificent puffs of steamy smoke at appropriate moments to create drama and mystery (there’s something very suspenseful and romantic about shadowy figures emerging from the smoke). It also provides the exciting edge-of-your-seat climax as it grinds to a dramatic halt just in time to avert disaster. Phew!

And there’s barely a dry eye in the house when the family are finally reunited as Daddy returns – the steam of the train once again providing the perfect dramatic foil as his familiar figure emerges from the smoke to Bobbie’s famous words “Daddy, my daddy!”

Did you know? The first ever steam train was built by Richard Trevithick in 1804. This train was too heavy and broke the track, so Trevithick built a new engine, called Catch Me Who Can, which was lighter and worked well on a circular track. In 1825, George Stephenson opened a railway in the north of England. George’s son, Robert Stephenson designed the world’s most famous steam engine, the Rocket,  which travelled at speeds of up to 28mph, which sounds rather modest now but in 1829 was considered very nifty indeed.

Fun Fact The Flying Scotsman was one of the world’s fastest steam locomotives. It travelled non-stop between London and Edinburgh and in 1934 become the first locomotive to travel faster than 100 mph. In 1938, the Mallard set a new steam locomotive speed record when it hit 138 mph. Today, the six electric trains with the highest operating speeds are the Shanghai maglev, which runs at 267.8 mph; the Italian Italo, at 223.7 mph; China’s CRH380A, capable of 216 mph; and then the Shinkansen E5, France’s TGV and the German ICE 3, which are all capable of 200 mph.

Why go For fun family entertainment with a nostalgic romance for parents who have grown up watching the 1970 film version of The Railway Children.

Who is it best for Trainspotters of all ages, who love the romance and allure of the Golden Age of steam.

Our Favourite Bit The ‘experiencial’ elements add an authenticity to the performance that really makes you feel like you’re track-side. Plus, the feat of stage engineering that actually allows a 60-ton steam train to be part of the action is pretty impressive.

Top Tip To get a real taste of old-style steam train travel, take a trip on the Keighley and Worth Valley Steam Railway, which was the location for the classic 1970 film. The line runs from Keighley to Oxenhope, passing through Haworth and Oakworth where much of the filming took place. Steam trains run every weekend throughout the year, and daily in school holidays.

Don’t Go Expecting an appearance from Thomas the Tank Engine. Young fans of Rev W Awdry chatterbox engines will enjoy spotting a real-life steam train, but may be disappointed that the train doesn’t have a smiley face.

While You’re Here N1C, as the King’s Cross area is now known, has a really sociable vibe these days – take a wander round the pedestrianised boulevards and see how much it has changed! Swing by Granary Square to admire the orchestrated fountains – pack spare clothes if your child is daring and wants to chance their luck dancing through the waterjets. Just around the corner, the House of Illustration is worth a quick-view, and there are plenty of family-friendly places to grab a bite to eat, including Caravan and The Grain Store, both of which have al fresco dining.

Author notes Edith Nesbit ( 1858–1924) was an English author and poet, who published over 60 books for children under the name of E. Nesbit. According to her biographer Julia Briggs, Nesbit was “the first modern writer for children”; Briggs also credits Nesbit with having invented the children’s adventure story, while playwright Noël Coward stated that Nesbit “had an economy of phrase, and an unparalleled talent for evoking hot summer days in the English countryside.” Her innovative body of work combined realistic, contemporary children in real-world settings with magical objects and adventures and sometimes travel to fantastic worlds. Among her best-known books are The Story of the Treasure Seekers (1898) and The Wouldbegoods (1899), which both recount stories about the Bastables, a middle-class family that has fallen on hard times; another of her books Five Children and It (1902) was the inspiration for Jacqueline Wilson updated retelling of the story in Four Children and It. The 1970 film adaptation of Railway Children, directed by Lionel Jeffries and starring Jenny Agutter and Bernard Cribbons, is also considered a classic. Her children’s writing also included numerous plays and collections of verse. Nesbit was also a political activist and co-founded the Fabian Society, a socialist organisation later affiliated to the Labour Party. 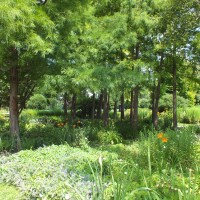 Best Park for a Picnic: Vienna 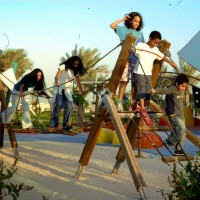 Best Park for a Picnic: Dubai 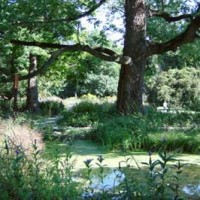