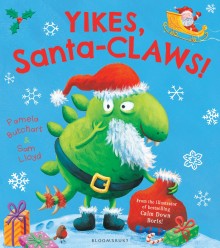 As a family of unsuspecting dinosaurs are being sweetly tucked up in bed, there’s an interloper sliding down the chimney and he’s clearly not in the business of bestowing gifts. Instead, this cheeky chap is running amok on a grand scale.

Munching on the tree, greedily scoffing the turkey and even parading in Dino Dad’s new reindeer pants, Santa-Claws is in danger of ruining Christmas for everyone. Yikes, indeed!

And the devastation doesn’t stop there. Having had his fill in one house, Santa-Claws proceeds to trash every home in the vicinity, culminating with an almighty leap on a Christmas tree which topples with a splendid crash. But who’s this arriving on the scene with a face like thunder. One very unhappy Santa Claus who is not best pleased.  Can our repentant run-amok monster make amends? Well, take a guess, bearing in mind it is the season of peace and goodwill to all men – and that includes naughty dinos too.

With a witty rhyming text and lots of funny details to spot in the rising chaos (including a trail of stinky poos!) before peaceful order is restored.

Author notes Pamela Butchart is an exciting young picture book author, who has written several children’s books, including three in the Yikes series, including Yikes, Stinkysaurus!, Yikes Ticklysaurus! and of course Yikes, Santa-Claws! Pamela is a teacher of Philosophy and lives in Dundee.

Sam Lloyd studied at Brighton University where she gained a BA Hons in Illustration. Her picture books include Happy Day, Sad Dog which won the Sainsbury’s Baby Book Award in 2003, Mr Pusskins which won the Booktrust Pre-School Award in 2006 and the V & A Illustration Award, and best-selling Calm Down Boris! Sam also does a lot of voluntary work with children, painting murals. She lives in Brighton with her partner, her ‘little sunbeam’, to whom Yikes, Santa-Claws! is dedicated, and a cat.