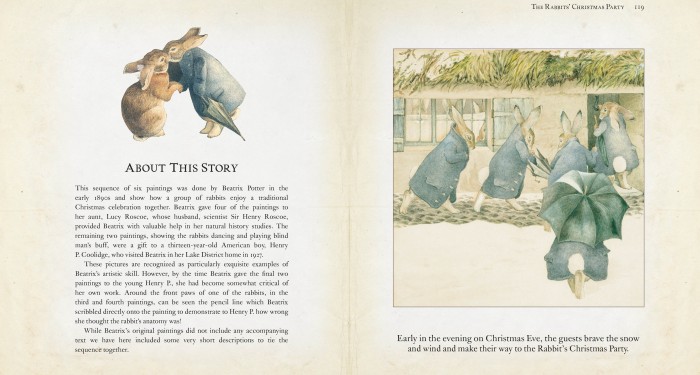 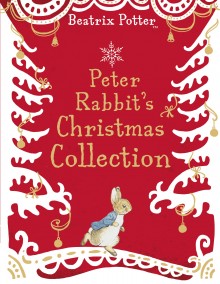 The delightfully whimsical world of Beatrix Potter and her coterie of cute creatures has ample charms at the best of times. Throw Christmas into the equation and you have the makings of something truly magical.

As a self-professed lover of Christmas time, Beatrix Potter often created festive scenes for her menagerie of creatures and handmade cards and notes for her young fans. She even wrote letters from her characters: Peter Rabbit and Benjamin Bunny describe decorating their big fir tree; the Flopsy Bunnies list what they will eat for their Christmas dinner (apple and celery tops, if you’re interested).

It is fitting that Beatrix Potter’s most famous creation Peter Rabbit, wearing his signature little blue jacket, should be scampering in bunny hops across a snowy scene on the cover of this sumptuous Christmas Collection.

This gorgeous gift edition brings together full and unabridged versions of some of Potter’s well-loved classics, including The Tale of Peter Rabbit, The Tale of Benjamin Bunny, The Tale of the Flopsy Bunnies, The Tale of Two Bad Mice  and The Tailor of Gloucester. There’s also an ‘About this book’ introduction to each tale that puts it into historical context and offers insight in Potter’s inspiration for her characters.

The collection also features rarely seen seasonal stories, including the delightfully titled Demerara Sugar from The Fairy Caravan. It also includes letters to young fans, often in the childlike hand of her characters (though we’re sure it’s prettty tricky for a bunny to hold a fountain pen in his paw) plus a selection of Christmas cards featuring bunnies traipsing through the snow to make their festive deliveries.

Each entry shares a sense of cosy celebration as families gather and Potter’s animals celebrate the season in their own unique ways – with just a hint of playful mischief here and there.

Beautifully illustrated throughout with Potter’s wonderfully evocative and detailed drawings, this charming treasury is a perfect gift for fans of Peter Rabbit and his cute cohorts. And we’ll even forgive him for neglecting to heed his mother’s dictum when she announced: “Now run along. And don’t get into mischief.”

And of course, just like a pet, this collection is not just for Christmas.

Did you know? The Tale of Peter Rabbit was rejected by several publishers, so Beatrix had it printed herself, to give to family and friends, before it was finally published by Frederick Warne in 1902.

Author notes Helen Beatrix Potter (1866–1943) was an English author, illustrator, natural scientist and conservationist best known for her imaginative children’s books, which celebrated the British landscape and country life. Born in London into a wealthy family, Potter and her younger brother Walter had numerous small pets which they observed closely and drew endlessly. Summer holidays were spent in Scotland and in the English Lake District where Beatrix developed a love of the natural world which was the subject of her painting from an early age.

Potter published over 23 books, using the proceeds to buy Hill Top Farm in Near Sawrey, a tiny village in the Lake District near Windermere, in 1905. Over the following decades, she purchased additional farms to preserve the unique hill country landscape. Potter was also a prize-winning breeder of Herdwick sheep and a prosperous farmer keenly interested in land preservation. She continued to write, illustrate and design spin-off merchandise based on her children’s books for Warne until the duties of land management and her diminishing eyesight made it difficult to continue. She died of pneumonia and heart disease on 22 December 1943 at age 77, leaving almost all her property to the National Trust. Today she is credited with preserving much of the land that now comprises the Lake District National Park.