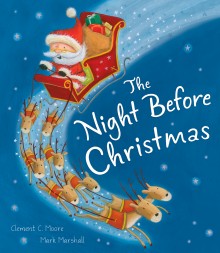 THE NIGHT BEFORE CHRISTMAS

The Night Before Christmas

‘Twas the night before Christmas and all through the house, not a creature was stirring, not even a mouse…

These familiar words, first written by Clement C Moore in 1822, have become so well known that they immediately conjure up a seasonal tale, seen through the eyes of a young child on Christmas Eve, awaiting the arrival of a certain jolly fella in a red suit.

Originally entitled A Visit From St. Nicholas, the rhyming poem features many of the staples that have become synonymous with the festive season with colourful depictions of Santa “a right jolly old elf” and his eight sprightly reindeer

Mark Marshall’s charming illustrations create a cosy homely feel, as the fire softly crackles with golden light and an expectant hush descends. But as everyone – including mouse – are slumbering, a little lad awakes when he hears a cluttering sound outside and he is treated to the most amazing spectacle that every child dreams of seeing.

Flying through the air, like a superhero in a magical chariot, Father Christmas is a man on a mission to hastily deliver presents to the children of the world. We are also given a lively description of the man himself, which has coloured visions of Santa ever since, with his twinkling eyes, rosy cheeks and beard as white as snow.

With a swoosh of silver glitter on the cover twinkling as bright as the glint in Santa’s eyes, this is the perfect book to read together in the run-up to Christmas, guaranteed to put you in a feel-good festive mood.

Did you know? There are four handwrit­ten copies of the poem known to exist. Three are in muse­ums, while the fourth was sold in 2006 for $280,000.

*** MORE SANTA TALES *** Read our review of the delightful ditty I Love You Father Christmas by Giles Andreae and Emma Dodd.

Author notes Clement Clarke Moore (1779–1863) was a writer and American Professor of Oriental and Greek Literature, as well as Divinity and Biblical Learning, at the General Theological Seminary of the Protestant Episcopal Church, in New York City. The seminary was developed on land donated by Moore, who gained considerable wealth by subdividing and developing parts of his large inherited estate in what became known as the residential neighborhood of Chelsea.

Illustrator notes Mark Marshall did his illustration degree at the University of Wolverhampton. His first book was Stop, Elephant, Stop! As well as being an illustrator, Mark also works as a TV extra appearing in programmes like Eastenders and The Bill. Mark lives and works in London.