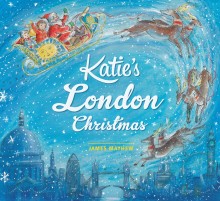 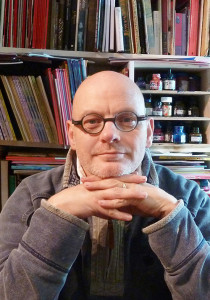 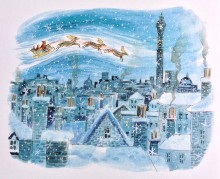 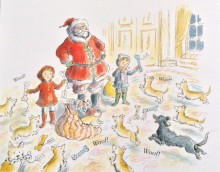 A crew of majestic pups

A sneezing Santa with the sniffles wakes Katie and her brother Jack on Christmas eve. But how will a poorly Santa manage to complete his very special moonlight mission? Perhaps two willing helpers can assist…

A mischievous little sister, a trip to the big city and an enthralling big book called Art Treasures of the World were the inspiration for James Mayhew who created his art-loving heroine Katie. In this festive addition to her adventures, Mayhew brings the magic of London’s finest architecture to life with stunning effect.

Looking delightfully festive, with pretty illuminations and a icing-sugar sprinkling of snowflakes, London is seen in all its glittering glory from the Palladian columns of Covent Garden’s Piazza to Trafalgar Square, the Tower of London and the Houses of Parliament and Big Ben.

Why hop on a bus or hail a black cab to see London’s iconic sights when you have the chance to journey in style in a magical flying sleigh? Courtesy of chauffeur Santa, Katie and Jack are treated to breathtaking aerial views before landing in the grandest abode in town, Buckingham Palace

Katie’s trip of a lifetime ends with a sneaky peek into the royal household where a crew of cheeky corgis are eagerly anticipating their bone-shaped pressies.

Mayhew’s illustrations are filled with starry magic in this delightful festive read, and there’s also plenty of opportunity to spot your favourite London locations – and ponder just what Santa might have delivered to the PM’s stocking at 10 Downing Street!

*** FANCY MORE FLIGHTS OF FANCY? *** Treat the family to festive favourite The Snowman at the Peacock Theatre, and see how a snowman and a little boy in striped pyjamas like to take in the views of London.

Fun fact One of Katie’s great art adventures is entitled Katie and The Starry Night. Based on the masterpiece by Vincent van Gogh, this swirling brushstrokes of this magical painting actually seem to flicker because of the way in which the human brain works.

Did you know? One of the most famous fictional ‘Katies’ was created by Susan Coolidge in What Katy Did, published in 1872, that follows the adventures of 12-year-old Katy Carr. Typical tomboy Katie is forever getting into scrapes, until a terrible accident enforces a long period of convalescence where she learns to be as good and kind as she has always wanted to be.

Author notes Illustrator, author, concert presenter and storyteller, James Mayhew was born in Stamford in 1964. Art was always his favourite subject at school, and he eventually went on to study illustration at Maidstone College of Art, graduating in 1987 with First Class Honours. His first children’s book, Katie’s Picture Show was published in 1989 and has been firmly in print ever since. Many more “Katie” titles have followed and the best-selling series can now be found in museums and galleries all over the world, from the Met in New York, to the Uffizi in Florence, the Louvre in Paris, and beyond.