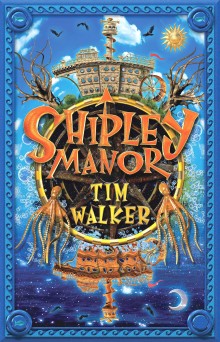 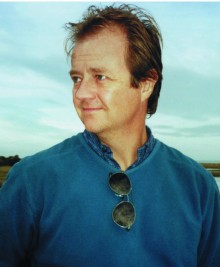 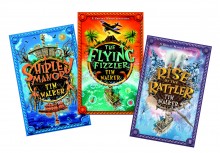 Straight-laced school boy Tom is on an earn-and-learn odyssey as his new Saturday job at Shipley Manor Country Club brings plenty of unexpected adventure, unscrupulous skullduggery and a fizzling touch of magic…

Far from being a dare devil risk-taker, Tom Sterling is a boy who abides by the rules. His family motto is the opposite of ‘he who dares, win’. Instead, it’s a case of ‘don’t take any risks and avoid danger at all costs’.

Quite a sensible strategy, you might think, but not an awful lot of fun.

Tom’s ‘sensible’ world is turned upside down by the crazy eccentrics at Shipley Manor that include a madcap ship’s captain, a young girl Polly with a sartorial flamboyance that Lady Gaga would approve of, a cast of talking sheep and some strangely intoxicating Fizzle. And, though he’d hate to
admit it, he kinda likes it

To say Shipley Manor is an unusual establishment is an understatement. Everything is completely out of the ordinary (even those talking sheep aren’t quite what they seem), which is hard for a sensible boy like Tom to comprehend. But he gradually falls under the spell of its  magical charms and its motley collection of inhabitants, each one as zany as the other but all with hearts of gold.

And it would all be going fizzingly well if it wasn’t for an unscrupulous pair of shady characters, the vile Venetia Pike and corrupt bank manager, Barclay Grub. Hatching an evil plan to procure Shipley Manor for their own financial gain, the dastardly duo will stop at nothing to achieve their wicked deed.

All this makes for fast-paced, high-action thrills aplenty as the Shipley Manor family  finally realise they are under siege and must pull together to succeed. Will evil triumph or will their most potent secret weapon, the Fizzle, come to the rescue?

This wonderful chapter book has all the ingredients of a fantasy action adventure. The rich descriptive text gives a cinematic feel and there’s lots of tension and excitement as the narrative reaches its climax.

Those who like their villains of the grotesque kind will appreciate the comical renditions of Venetia and Grub, portrayed with Roald Dahlian zeal, with touches of David Walliams’ wit (We can just imagine him portraying a demonic Venetia Pike in drag!).

There’s also a gentler back story of the relationship between Tom and his father, and how they are both coming to terms with the accidental death of Tom’s mother at the hands of a ‘rule-breaker’ (she saved a drowning man who had ventured into dangerous waters). It’s also a lesson that will strike a chord with any parents who struggles with the idea of their child taking risks – yet in their heart knows a life without risk is not really living at all.

Have you got the Fizzle? You certainly will by the end. And readers want some more, they’ll be pleased to know there are two further adventures to enjoy: The Flying Fizzler and Rise of the Rattler.

Fun fact ‘Ship shape and Bristol fashion’ is a phrase used when everything is neat and tidy – so not a phrase that would necessarily apply to Shipley Manor. The reference to Bristol harks back to the days when it was an important English seaport.

Did you know? The first known reference of the term “Pop” as a beverage was in 1812 in a letter written by English poet Robert Southey. He called it “the most admirable cyder, and a new manufactory of a nectar, between soda-water and ginger-beer, and called pop, because ‘pop goes the cork’ when it is drawn, and pop you would go off too, if you drank too much of it.”

Author notes Tim Walker lives with his family in the Kent countryside, where he writes children’s books from a shed at the bottom of his garden. Shipley Manor is followed by The Flying Fizzler and Rise of the Rattler to complete the Fizzle Trilogy.