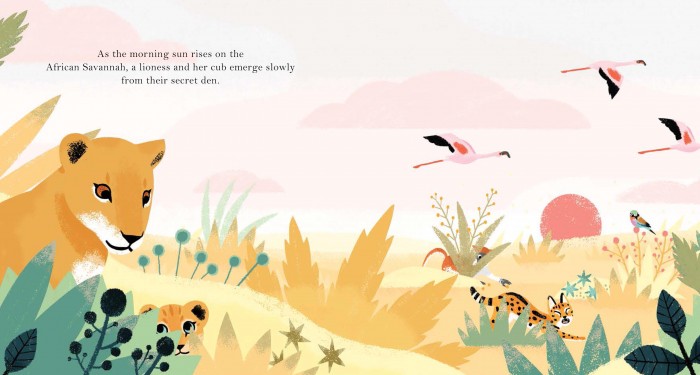 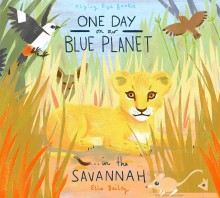 ONE DAY ON OUR BLUE PLANET

One Day On Our Blue Planet… In the Savannah

A young lion cub greets the dawn with unadulterated joy and enthusiasm, but what  adventures does the long day hold in store for him as he pads about the vivid grasslands of the African Savannah?

Wide-eyed and bushy tailed, there’s an air of excited anticipation in this little cub’s demeanor. After being close to his mother since birth, the time has now come for him to venture out from the safety of his secret den into the big wide world.

And wow! What a wonderful world it is: filled with amazing wildlife, beautiful landscapes and plenty of play opportunities for a curious cub.

There are shades of Disney’s The Lion King, with our playful young cub in the starring role of Simba in a rite of passage as he learns what it means to be a member of the ‘royal’ pride of lions, Kings of the Savannah

The first book in a series about different parts of the natural world, the One Day on our Blue Planet books teach children about animals in their natural habitats.

The gentle narrative follows a day in the life format, which sees our cheerful cub frolicking with young cousins and gazing in admiration at the Daddy Lion with his fierce roar to stalking and chasing other creatures, essential life skills that will serve him well in the future.

As night starts to fall, the glorious golden hues of the sun-kissed Savannah give way to evocative dark shades punctuated with the brightness of various creature’s eyes, stealthily moving in the darkness. When the sun rises, another day of fun beckons…

Ella Bailey’s sumptuous illustrations really bring to life the wonderful vibrancy and rich variety of life in the Savannah, as seen through the eyes of the creatures that are at the top of the food chain (there are no gory blood scenes, but you can tell by the steely glaze of the lions that they are about to pounce on an unsuspecting zebra, and the text makes it clear that lions are voracious meat-eaters).

Beautifully designed with a tactile linen-effect cover, the book’s end papers are a glorious glossary of all the animals featured, with ‘daytime’ creatures at the front, and ‘night time’ animals at the back, giving children the added fun of learning and identifying all the animals from more well known giraffes, monkeys and zebras to the lesser-spotted Rufous elephant shrew, klipspringer, aardvaark and caracal.

Fun fact Contrary to the popular song, lions do not sleep at night. Lions are nocturnal, but they are also very opportunistic in terms of when they are active. If lions have water within their territory that attracts prey animals in the daytime, the lions will be active in the day.

Did you know? Lions hunt at night not because their eyesight is better under low light conditions than that of their prey, but because with stealth they can probably approach their prey closer at night than during the day. Many antelopes also store heat in their bodies during the day and release it in the cool of the night, meaning that their muscles work less efficiently at dusk and early evening, so they run slower and have less endurance – which all works to a hungry lion’s benefit!

** MORE ANIMAL MAGIC ** Find fascinating facts about wonderful wildlife in our comprehensive A to Z Where the Wild Things Are feature.