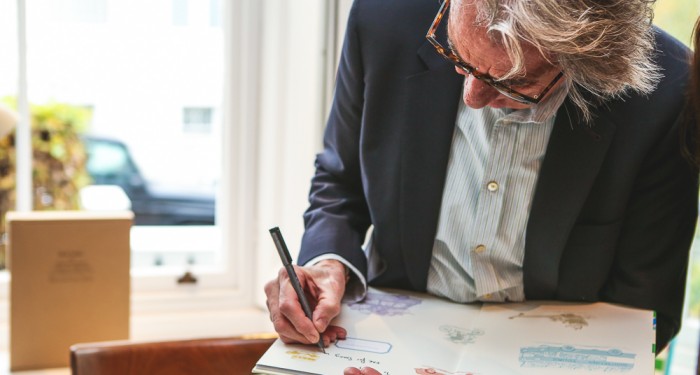 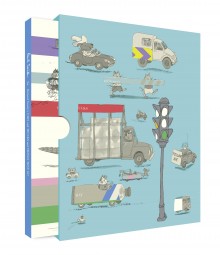 CARS AND TRUCKS AND THINGS THAT GO

By Paul Smith for Richard Scarry

The dream team of Paul Smith and Richard Scarry

Two icons in the fields of fiction and fashion have come together in an exciting – and rather unexpected – collaboration as designer Paul Smith lends his sartorial style to celebrate the 40th anniversary of one of Richard Scarry’s best loved picture books.

First published in 1974, Cars and Trucks and Things that Go brings together Scarry’s fascination for animals and vehicles – a passion he shares with legions of fans the world over, not least Sir Paul Smith who cites the book as “actually one of my favourite books of all time.”

Loved by generations of children since they first appeared in 1963, Richard Scarry’s scuttling and scurrying creatures have proven longevity and timeless appeal. Add the sartorial sensibilities of designer Paul Smith and you have something of a Dream Team.

Cars and Trucks and Things that Go stars the colourful community of cats and dogs, pigs and foxes and bunnies that inhabit Busytown. This is unabridged version of the original book has an arty new cover design that echoes the signature Paul Smith stripes, with the playful addition of chevrons and road markings. It also comes in a commemorative turquoise slipcase which (by coincidence?) features a picture of ‘Paul the painter’ and a very clever set of cut-outs that makes the traffic lights change from red to amber to green as you pull the book from its case!

Inside, the fictional community of Busytown – busy by name and busy by nature – is a veritable hive of activity. Each page is (traffic) jam-packed with action, as industrious little critters go about their business. Calamity is never too far from the frame with accidents and mishaps just waiting to happen, whether it’s the cheery carpenter oblivious to the hole in his bag of nails that is leaving a spiky trail in his wake and puncturing lots of tyres, or the bad driver wreaking havoc as he knocks down a line of parking metres – much to the startled dismay of one “frightened parking metre” who, by the look on his face, fears he could be next!

All the frenzied activity has plenty of comedic value in a Mr Bean kind of hapless tomfoolery way. The text also draws the reader’s attention to some of the visual gags, with questions and invitations that encourage young readers to look even closer and seek out the minute details in every single picture. And there’s plenty to discover!

While the animals have the cute appeal of Sylvanian families (which incidentally were first introduced in 1985), vehicle enthusiasts will love the amazing range of wheeled contraptions on show from occupational diggers, tractors, emergency vehicles, excavators, and bulldozers to recreational camper vans and school buses. There’s also antiquated vintage cars and wild and wacky cars that look like bananas, corn on the cob, sharks, crocodiles and even a super-long pencil that seats five that are the pure invention of Scarry’s wit and imagination.

Alongside the retro appeal that will bring a warm smile to parents who remember the books from their childhood, the disarming innocence and naive charm of characters like Huckle Cat, Lowly Worm, Hilda Hippo and Officer Flossy will still hold massive appeal to a new audience. Cute animals up to all sorts of crazy capers: what’s not to love?

But there’s more to it than cute. Scarry cleverly recognised the endless fascination that children have for poring over pictures and catalogues, and for spotting funny details. Long before Where’s Wally?, Scarry was inviting his readers to find the googly-eyed Goldbug playing hide-and-seek, or Lowly Worm in his favourite hat. Above all, his characters are likeable, and they’re funny; even when there’s a mild hint of road rage or exasperation in their demeanor, they still manage to appear affable and amiable.

As Paul Smith writes in his preface: “Richard Scarry was incredibly perceptive, from the tense face of a fireman to the cheekiness of a postman, he really knew how to create a character, and his observations of everyday life are brilliant.”

Paul Smith has also collaborated with Richard Scarry’s son, Huck Scarry to redesign elements of the book in a definitive limited edition of 1,000 copies, each signed by Paul Smith. The Limited Edition Deluxe Box Set Paul Smith for Richard Scarry’s Cars and Trucks and Things that Go comes in a linen covered presentation box, and includes a large pop-up scene and three press-out-and-make vehicles to add another level of playfulness to the book. It also contains 5 art prints in a portfolio, a hand-numbered and signed certificate of authenticity and costs £200.

Fun fact One of Scarry’s most enduring characters Lowly Worm usually wears a Tyrolean hat on his head – just like the one Richard Scarry purchased as a souvenir in St Anton, Austria, in 1950. He often wore the distinctive hat when he visited his publishers in New York City.

Did you know? Richard Scarry’s Best Word Book Ever, which was first published in 1963, was reissued in 1980 as a “new revised edition” with more gender-neutral scenes (such as a male character in a kitchen scene, and a female scientist. The phrase “pretty stewardess” was changed to “flight attendant”, and male characters engaged in traditionally masculine activities such as driving a steamroller were altered into female characters by the addition of hair ribbons or pink flowers.

Author details Born in 1919, Richard McClure Scarry is one of the world’s best-loved children’s authors, with generations of children all over the world spending hours poring over his books featuring the fictional Busytown, filled with a menageries of creatures and the colorful details of their daily lives. During his writing career, Scarry illustrated over 150 books, many of which have never been out of print. His books have sold over 100 million copies around the world, and are currently published in over twenty languages. His son Richard Scarry Jr, also an illustrator, carries on his father’s work today under the name of Huck Scarry. Scarry died in 1994, and was posthumously awarded a Lifetime Achievement Award from The Society of Illustrators in 2012.

Designer Paul Smith opened his first tiny shop in 1970, which he managed by day whilst taking evening classes for tailoring. By 1976, Paul showed his first menswear collection in Paris under the Paul Smith label. In business for over 40 years, Paul Smith had established himself as the pre-eminent British designer with his ability to anticipate, and even spark trends not only fashion but in the wider context of popular culture. His signature is the Paul Smith stripe. He manages to bring a genuine sense of humour and mischief mixed with his love of tradition and the classics to his designs. The Paul Smith collection is wholesaled to 66 countries and there are Paul Smith shops in London, Paris, Milan, New York, San Francisco, Los Angeles, Antwerp, Hong Kong, Singapore, Taiwan, Korea, U.A.E. – and over 200 throughout Japan.