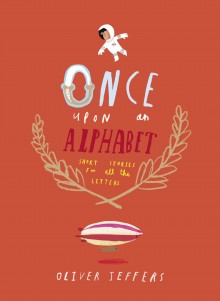 ONCE UPON AN ALPHABET 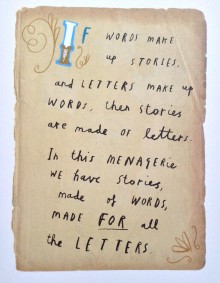 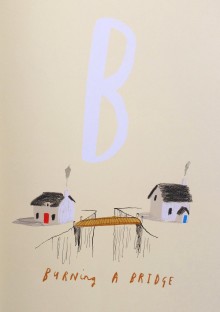 Once Upon An Alphabet

Award-winning author illustrator Oliver Jeffers takes readers on a quirky stroll through the alphabet in his brilliant book Once Upon An Alphabet.

‘If words make up stories, and letters make up words, then stories are made of letters. In this menagerie we have stories, made up of words, made for all the letters.’ So writes Jeffers, in his own stylish signature typography, as he introduces the premise of his book.

It’s not every picture book artist who can boast the official @U2 among their Twitter followers, but such is the rock n roll street cred of Oliver Jeffers that
it’s no surprise. This guy creates
seriously cool books.

A big part of Jeffers’ appeal is his ingenious originality and inventive imagination. So this is no traditional A is for Apple learn-your-letters tome. Instead, each letter has its own self-contained vignette that varies in tone from cautionary tale (in Burning Bridges) and quizzical conundrum (in the How many Elephants Enigma) to the absurd (in Jelly Door) or just plain jokey (the Puzzled Parship who thinks he’s a potato). There’s a little bit of science in there (Mary Made of Matter), a touch of poignancy (the Cup who yearns to leave the lonely confines of his dark cupboard for the sunny haven of the windowsill) and some surrealism (the Whirraffe who has the head of a whisk and the body of a giraffe).

What unifies these quirky tales is Jeffers’ witty tongue in-cheek humour that never fails to raise a smile. It’s no mean feat to tell a story in a succinct space with a brevity of well chosen words, but Jeffers pulls it off with panache.

Of course, it helps that his illustrations are wonderfully evocative (in a ‘picture paints a thousands words’ sort of way). His characters have truly telling expressions: you can really sense Victor’s vexation at no longer being victorious. There are also a few familiar faces from previous books making cameo performances, including a certain little fella in a striped shirt (who incidentally was inspired by the monsters who wears a striped shirt in Maurice Sendak’s classic Where The Wild Things Are). Such is Jeffers’ talent for characterisation that you can imagine many of the characters, such as Danger Delilah, starring in their very own picture book. Now there’s a thought.

In a final stroke of storytelling mastery, Jeffers even manages to tie up his A to Z tale with a return to Edmund the Astronaut who buys himself a Zeppelin to help further his ambitions of flying to the moon. But will he ever get there? Well, that’s another story.

Fun fact Oliver Jeffers’ favourite letter is ‘O’. He thinks this may be because it’s his first initial, he was born in October, and because it’s well rounded. There are also two of them in Brooklyn, where Oliver now lives and works.

Author notes Born in Australia in 1977, Oliver Jeffers grew up in Northern Ireland. He now lives in Brooklyn, New York and has won countless illustration awards, including the CBI Bisto Award for How to Catch a Star. Although he focuses primarily on children’s books, his work has been exhibited at the National Portrait Gallery in London and a collection of his illustrations, Neither Here nor There, was published by art and design powerhouse Gestalten in 2012. The boy and penguin from Lost and Found return in the sequel, Up and Down, published in 2011. In 2014 Jeffers won four new awards, three for his work with The Day The Crayons Quit, as well as The Hay Festival of Literature and the Arts 2014 Inaugural Hay Medal for an Outstanding Body of Work.