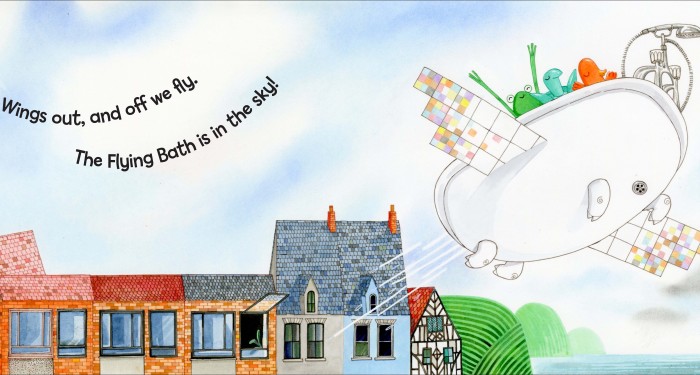 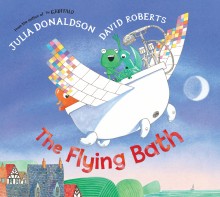 Plenty of playful shenanigans are afoot as a teeny crew of bathtime toys spring magically to life and set off on a whistle-stop mission to deliver water aid to those in need. Their heroic mode of transport? A flying bath, of course.

Animals in need are at the heart of this rhyming rhetoric. Thankfully, there’s a crack team of brave heroes to race to the rescue. A kangaroo weak with thirst? She can sup from the watery bath. A grubby pig in a pickle? A soapy shower should do the trick. A fish who’s literally out of water? This one’s a bit tricky…

A rubber duck, a floppy-limbed frog and a wind-up turtle might sound like an unlikely trio to head up a Pet Rescue division, but they do seem to be pretty effective, as they solve one drama after another. And every time they set off on another plight, their call to action refrain is the same: ‘Wings out, and off we fly. The Flying Bath is in the sky!’

Master wordsmith Julia Donaldson is at her playfully poetic best as the rhythmic rhyming text trips of the tongue, while David Roberts breathes artistic life into the cute coterie
of mini superheroes.

Finally, their dynamic day draws to a close, but they have one final date with destiny. The fish pond has run dry, but it’s time for them to return home. Can they pull off one last rescue? Of course, they can! As two delighted children discover a colourful fish in the bathtub, and their mother proclaims ‘Good heavens, not another one!’, the readers realise the possibility that this fantastical journey of the flying bath is a regular occurrence.

There is a real joy in Donaldson’s rhyming text and you can’t help but feel a sense of feel-good satisfaction at the life-saving antics of the intrepid trio. Roberts, too, clearly has fun with the illustrations creating a vibrant collection of colourful scenes from the kangaroo in his cactus-filled desert to a profusion of exotic looking flowers worthy of Kew Gardens. And there’s more than a hint of David’s fashion background evident in the strong graphic print on the mother’s pantsuit and her funky wedged platform shoes.

This jolly bathtime adventure will appeal to fans of Toy Story who love the idea that their inanimate toys live a secret life. It’s also the perfect round-off to the day. As any lover of routine knows, after bathtime comes the bedtime story, and this book cleverly combines the two.

Author Notes Born in 1948, Julia Donaldson is a celebrated British writer, playwright and performer, the 2011–2013 Children’s Laureate and the prize-winning author of some of the world’s most-loved children’s books, most notably the modern classic The Gruffalo which has sold over 5 million copies worldwide. Julia is best known for her popular rhyming stories for children, including Stick Man, The Gruffalo, and Room on the Broom, illustrated by Axel Scheffler. She has also collaborated with David Roberts on Tyrannosaurus Drip, The Troll and Jack and the Flumflum Tree. In 2011, Julia was awarded an MBE for her services to Literature. She lives in Glasgow with her husband, where she says often mulls over story ideas in the bath!

David Roberts is an award-winning illustrator with an international following. Born in Liverpool, he has a degree in fashion design, and has worked as a milliner and fashion illustrator. But he always felt his true calling was in children’s book illustration and now pursues that dream from his flat in London, although his continued love of fashion, fabric and pattern often feeds into his work.