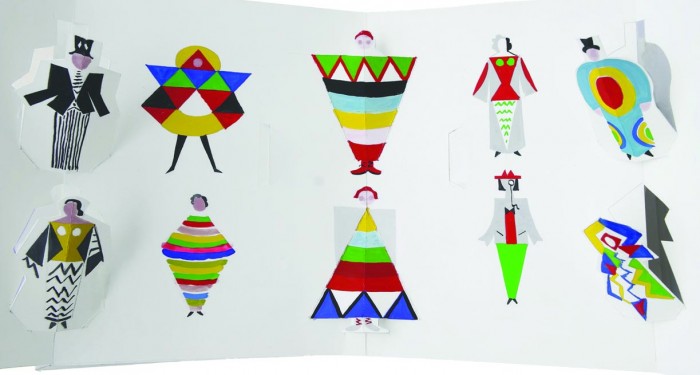 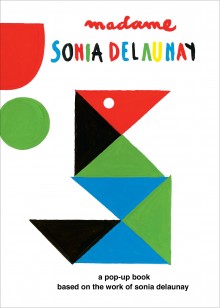 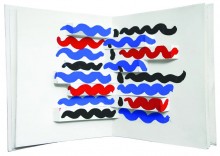 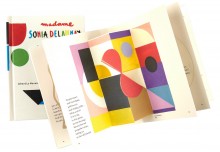 Dynamic geometric designs, swirling shapes and cascading circles combine to create a stunning showcase of modern art for the littlest of art lovers by the grande dame of avant-garde Sonia Delaunay.

This stunning book brings together original works of modern art that span four decades from 1923 to 1966, along with a playful narrative that invites young readers to explore and imagine.

From a swirl of circles that could be dancing – or could they be planets in the solar system? – to a mass of wavy lines that could be construed as rich moustaches or slithering snakes. Each image is presented with a variety of interpretations and possibilities, showing the wonderful opportunities that art brings for everyone to see something different in a picture.

Way before the pop art explosion of the 60s, Sonia Delaunay was putting ‘pop’ in her pictures with dazzling style. Babies and toddlers will especially love her bold touch and eye-popping creations with a world of wonderful shapes and colours to spot

The delightful images are further brought to life with some clever paper engineering that creates movement and adds three-dimensional depth so those ‘planets’ really look like they are artfully suspended in space (Note: you might want to keep its delicate pop-ups out of reach of youngsters going through a grabby stage. The book is made of nice thick paper but some of the more intricate engineering may not withstand very rough exploration).

This is a wonderful artistic adventure that will encourage children to hone their critical appreciation and look at art with open hearts and minds: the beauty of it is that everything is open to personal interpretation. What’s more, all those wonderful images, including dancing figures made from circles and dramatic triangular dresses in rainbow colours and a lightning Pierrot whose body is a zig-zaggy concertina, are likely to encourage your child to put pencil and paintbrush to paper to create their own masterpieces.

Fun fact As well as his surrealist artworks, painter Salvador Dalí is also famous for his distinctive facial hair. It is said that Dalí adopted his signature twirly moustache from classical Spanish master, Diego Velázquez. In fact, his moustache is one of the most influential pieces of facial hair in history, as voted by Movember participants.

Did you know? American artist Jackson Pollock created a unique style of painting by splashing and dribbling paint onto the canvas straight from the can. His unconventional style, part of the abstract expressionist movement, was later called Action Painting. His work No. 5, 1948, in which yellow and brown paint was drizzled to create an intricate nest of colours and textures, sold in 2006 for $140 million.

Design details Sonia Delaunay (1885–1979) was a key figure in the Parisian avant-garde and became the European doyenne of abstract art. Throughout the first half of the twentieth century, she celebrated the modern world of movement, technology and urban life, exploring new ideas about colour theory together with her husband Robert Delaunay. Born in the Ukraine, Sonia Terk studied drawing at Karlsruhe 1903-5, then the Académie de la Palette, Paris. In 1907, Sonia began to paint Fauve pictures influenced by van Gogh and Gauguin, with intense colours. In 1910, she married Robert Delaunay, the two artists henceforth working in close association, painting abstract pictures, collages, book bindings and projects for posters using simultaneous contrast of colours. Delaunay also worked as an interior and textile designer, in styles related to her paintings; she also enjoyed innovative collaborations with poets, choreographers and manufacturers, from famed Russian art critic Serge Diaghilev to London department store Liberty. Delaunay was the subject of the first one-woman exhibition at the Galerie Bing, Paris, in 1953. Her work is currently showing at Tate Modern, London.