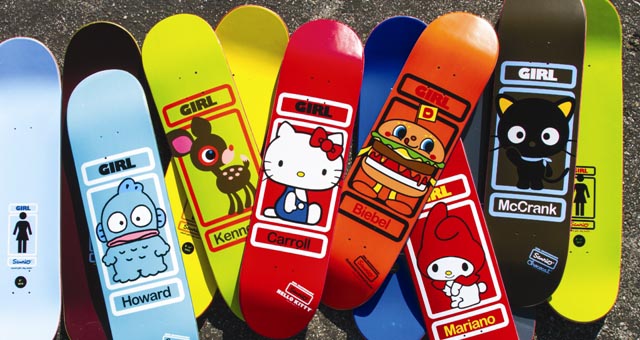 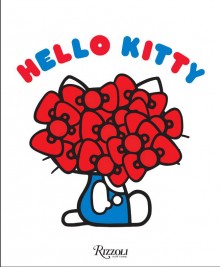 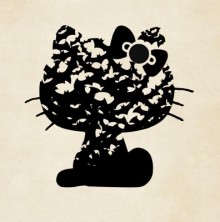 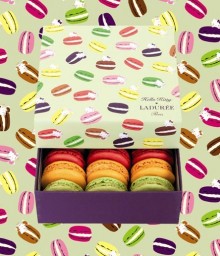 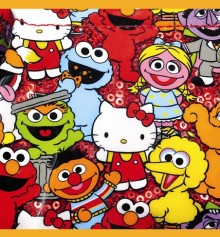 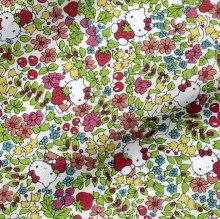 She started life as a kitty with no name – a bit like Clint Eastwood’s Western hero – but now her cute visage is instantly recognisable the world over. And such is her iconic status, that designers, artists and brands clamour to collaborate with Hello Kitty.

Created by Sanrio, a Japanese company that designs, licenses and produces products focusing on the kawaii (cute) segment of Japanese popular culture, Hello Kitty first appeared in 1974, as a pure white Japanese Bobtail kitten with dark oval eyes and a red bow jauntily perched above her left ear. With her cute allure, she was instantly embraced by an enthusiastic Japanese audience and was given her name. She adorned the very first Hello Kitty merchandise – a vinyl coin purse where she was pictured sitting between a bottle of milk and a goldfish bowl – in 1975.

Fast forward 40 years, and Hello Kitty has appeared on fashion apparel, artwork, toys, stationery, make-up, jewellery – even Laduree macaroons and donuts, created by a glittering array of talented individuals, who each hold a special place in their heart for this sweet and innocent little kitty.

In a world where ‘feat’ collaborations are de rigueur, Hello Kitty is right up there on the list of desirables. Her partners in crime have included the great and the good from the worlds of fashion and design, from Liberty and Lady Gaga to Uglydolls and Swaroski. As Hello Kitty herself prescribes: you can never have too many friends

This sumptuous Hello Kitty coffee table collection celebrates 40 years of this fabulous feline’s most famous connections, from renowned fashion labels such as Liberty, Barbour, and Diesel; beauty brands including Crabtree & Evelyn and MAC; designer and sports brands such as A Bathing Ape, Undercover, Stussy, Super, Vans, and Reebok; as well as a variety of fellow characters and celebrities including Elmo, Sonic the Hedgehog and One Direction, to name a few.

Over the years, many artists and designers have drawn inspiration from Hello Kitty’s deceptively simple graphics. This volumes shows a kitty with a thousand faces whether she’s sparkling on a Swaroski crystal clutch bag or her signature bow adorns a string of Mikimoto pearls, hanging with the hip skateboard crowd in Vans or lurking amid delicate florals of a classic Liberty print. She can kick-ass with panda-eye make-up as she rubs shoulders with heavy rockers Kiss or give DC Comics’ Wonder Women and Bat Girl a run for their money with her own superhero brand of kitty Kaboom!

Visually stunning, this pages of this glossy tome are purr-fect for poring – or pawing – over. The accompanying text and interviews also provides fascinating insight into the enduring charms of Hello Kitty.

“For as long as I can remember, I have always been a fan of Hello Kitty,” says Sarah Andelman, founder and creative director of Collette, Paris. “Hello Kitty is magic. Hello Kitty is happiness at its purest state and she’s someone you can become friends with straight away.”

Simplicity and a strong graphic style are key, as Jun Takahashi, Japanese designer and founder of cult label Undercover, explains:

Nowadays, we’re surrounded by too many icons with an aestetic and a design pushed to the extreme and over-abundant. Hello Kitty is the opposite of exaggeration. As there’s nothing extreme about her, it’s easy to find some form of empathy with her

Fun fact Born on November 1, 1974, Hell0 Kitty’s ‘real’ name is Kitty White and she lives in London, with her parents and twin sister, Mimmy. She is known as Hello Kitty in the United States, Europe and most of the world, she is called ‘Kitty Chan’ in Japan.

Did you know? Hello Kitty has her own jet plane, EVA Air’s Hand-in-Hand Hello Kitty Jet. The special edition Boeing 777-300ER takes to the skies four times a week between Paris and Taipei, in Taiwan.

** COMING SOON ** The world premiere and UK Tour of Hello Kitty Live: Fashion & Friends kicks off at the Eventim Appollo, Hammersmith on October 8. A story of talent, friendship and a passion for creativity combined with fantastic fashion and costumes., the show also features songs from Clean Bandit, Charli XCX, Bruno Mars, Kylie Minogue and Echosmith. 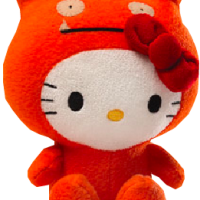 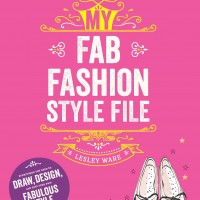