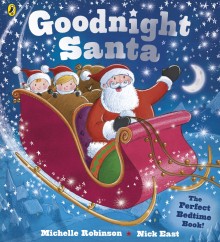 The magical anticipation of Christmas Eve is delightfully depicted in this cosy tale as two young children bid their bedtime farewells to a host of festive revellers.

“It’s Christmas Eve! Hop on the sled. It’s time we took you home to bed.” The wintry scene is set as playful children wind up their day of fun on the snow and trudge home to prepare for their last sleep before the big day.

With festivities going on all around, from singing choirs and children hanging up their stockings at the fireplace in eager anticipation of a delivery of gifts to Santa’s elves busying themselves with last-minute preparations, the world is a hive of activity. But now it’s time to beddy byes!

The playful rhyming text of this ditty cleverly uses a minimum of words to convey the maximum feel-good vibe, while the bright, bold pictures of happy faces surely mean these lucky children are not on Santa’s naughty list!

A fun tale full of festive cheer that begs to be read aloud and savoured as little ones drift off into a dreamy sleep. Just one word of warning: it’s light on text, and parents can expect to whip through it at a pace – except that your child might demand a few repeat readings before happily kissing you Goodnight.

Author notes Michelle Robinson grew up in Gloucestershire and loved being in the countryside because there was always so much to notice, like weird coloured ladybirds and steaming piles of cow poo. After going to university, she became a copywriter, writing over 6,000 radio ads before getting bored and moving on to writing TV ads and websites. She soon got bored again and started writing stories in her spare time. After meeting children’s authors Malachy Doyle and Vivian French on an Arvon Foundation course, she secured an agent and got her first book deal in 2008. Her book Ding Dong Gorilla!, illustrated by Leonie Lord, was shortlisted in the Picture Books category of the Sheffield Children’s Book Awards 2014, and There’s a Lion In My Cornflakes, illustrated by Jim Field, won the Sainsbury’s Children’s Book Awards 2914.

Nick East is a children’s book illustrator, who works from a studio in the beautiful city of York, which he shares with two illustrator friends, a whippet called Alfie and a huge lurcher called Basil. They drink loads of tea, eat cake and laugh a lot. Nick’s children’s books include Who’s for Dinner? and Harry and the Monster. He has also illustrated the popular Goodnight series written by Michelle Robinson that includes Goodnight Tractor, Goodnight Digger, Goodnight Prinxess and Goodnight Pirate.