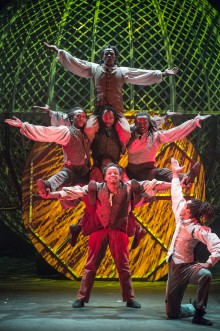 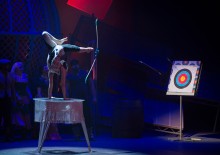 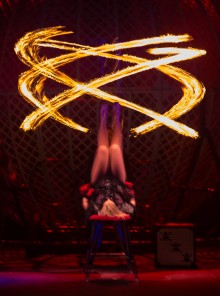 It’s not a circus, they tell us. It’s a Berserkus! And that means a heap of crazy tumbling, twirling, soaring and roaring (from motorbike engines, no lions here). Take your seats – or rather the edge of them – as the show is about to begin.

Billed as ‘real circus made for theatre’, Zippos Cirque Berserk temporarily ditches its usual home of the Big Top for this special tour of UK theatres, with a show specially adapted for stage.

Excitement mounts from the get-go with atmospheric Sherlock Holmes-esque music creating a chaotic olde-worlde crescendo of squeaky violins, cimbalom and a wonky piano (Hans Zimmer who created the soundtrack for Guy Ritchie’s Sherlock described Discombobulate as “the sound of The Pogues joining a Romanian orchestra”).

Sherlock Holmes makes a fitting reference, too, as there’s plenty of mystery to the logic-defying spectacles that await you, from the crazy antics of the Timbuktu Tumblers who skip on their bottoms and limbo under a flaming bars to knife-throwers, aerial artists, jugglers and contortionists.

Like a genie, a lithe figure emerges from a bottle before performing an act of masterful archery, shooting her arrow with her feet whilst performing
a handstand – and scoring a
near-bull’s eye. Eat your heart
out, Katniss Everdeen!

There was some noisy boot-clacking and bolas-banging in the style of a showman gaucho cowboy by Bolas Argentinas. At one point, we were worried his long Jack Sparrow locks were going to get caught in the crazy clackers, but of course they didn’t: it’s all part of the living dangerously allure.

His sidekick Germaine was also pretty adept at very fine footwork, first juggling five silver balls the size of melons and then furiously twirling a wheel of fire – without singeing a single toe.

The spectacle of such showmanship was interspersed with slapstick vignettes by Tweedy the clown. Sometimes, clowning can be a bit hit and miss, but Tweedy managed to hit the right note with Norman Wisdom meets Buster Keaton buffoonery and visual comedy with a ladder, unicycyle and a makeshift tightrope. He did some pretty fancy hat tricks too, tossing his hat to catch it on his head – surely a sign of a misspent youth!

Tweedy also likes a bit of playful audience participation – beware if you’re sitting in the front rows – but it was very good humoured. It’s always quite amusing when the unsuspecting audience end up the funniest part of the joke – though not sure if the two rather self-conscious teen lads who were invited as ‘helpers’ in our show would agree.

What really shines is the power of the performers, which is testament to the dedication the artists must put into their training. There was a truly amazing show of strength and eye-popping bendiness by Duo Ramona and Matti who contorted themselves into the most impossible positions – plus we liked the fact that Ramona had borrowed his hairy trousers from the Gruffalo.

Rippling abs, tough man posing (in feather headdresses) and more acrobatic catapulting came from the Tropicana Troupe, where the highlight was one of the bare-chested troupe being hurled through the air – and precariously close to the stage lights above – and landing on an armchair elevated on a pole.

While many of the performances excel in human strength, it is the roaring engine power of the stunt motorcyclists that provides the biggest thrill. The legendary motorcycle ‘Globe of Terror’ sits at the back of the stage for the entire show, and we get a teasing taster before the interval.

It comes into its own for the grand finale when the two-tonne steel globe is illuminated with blue lights and four noisy motorbikes wheelie onto stage, one by one, before entering the globe and racing round and round like maniacal bugs at 60 miles an hour.

As the lights go down in the theatre, the motorbikes and racers’ helmets light up in a dizzying, whizzying swirl as they race round in perfect precision timing, just missing each other by split seconds.

After that, we leave, nerves slightly jangling but exhilarated. On our way out, we stopped at the gift shop and Joe bought a plastic plate on a stick. I’m just hoping that if he ever wants to run away to the circus, he’ll stick to plate-twirling.

Why go? For the excitement of running away to the circus – if only for a few hours.

Who is it best for? Anyone who likes to marvel at the artistry of performers stretching their physical strength and agility to the max. Be prepared for plenty of eye-popping ‘wow!’ and ‘OMG’ moments.

Our favourite bit Joe loved the firework-fizzing robot – and would have like more of that. I have to admit I was rather taken with the particularly muscled torso of one of the Tropicana troupe.

While you’re there There’s lots of explore around the North Bank, from Somerset House and Covent Garden to Trafalgar Square and the National Gallery. If you’re looking for a family-friendly hotel in the vicinity, try One Aldwych. Their Charlie and The Chocolate Factory-inspired afternoon tea is amazing!

Fun fact Leotards are named after the first star of the flying trapeze, Jules Leotard. The French acrobat tailored the first maillot (the original name of the garment) for himself in 1859. The neat-fitting garment allowed him to perform sophisticated tricks flawlessly, whilst simultaneously exhibiting his well developed muscles to the audience.

Did you know? One of the circus world’s most famous female performers was German aerialist Lillian Leitzel (1891–1931) who performed on the Roman Rings and on a swivelled rope. Such was the strength of the 4 ft 9 in pocket rocket, who was billed as “Dainty Miss Leitzel”, that she could perform 19 chin-ups with her left hand and 27 with her right hand. Tragically, on Friday 13th of February, 1931, Lillian fell to the arena floor when her rope swivel crystallized and snapped. She died two days later.

** MORE CIRCUS FUN ** Get your kids performing tricks with this cool diabolo from Wild & Wolf, play with an entire take-along circus with Omm Design Circus Nesting Dolls and bring a touch of ringmaster chic into your home with the cool interiors range by Circus Triangle Collection.

About Zippos Circus Zippos Circus is one of the UK’s largest and most popular travelling circuses and has been touring the country for the past 25 years. Owned by Zippo the Clown himself, Martin Burton, the show has brought sunshine and laughter to a great number of communities, many in and around the London area but also stretching as far afield as Somerset and Wiltshire, Essex, the Midlands, the North of the country and Scotland.