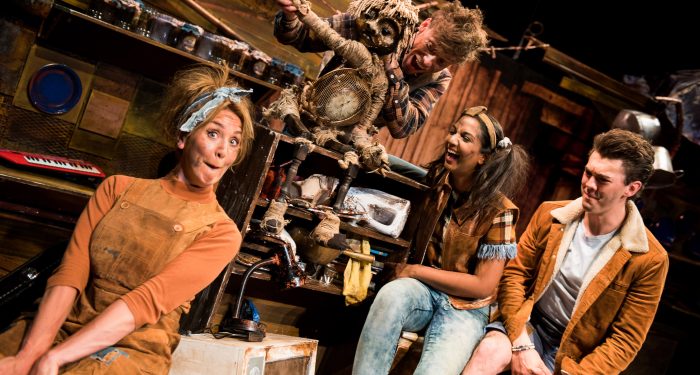 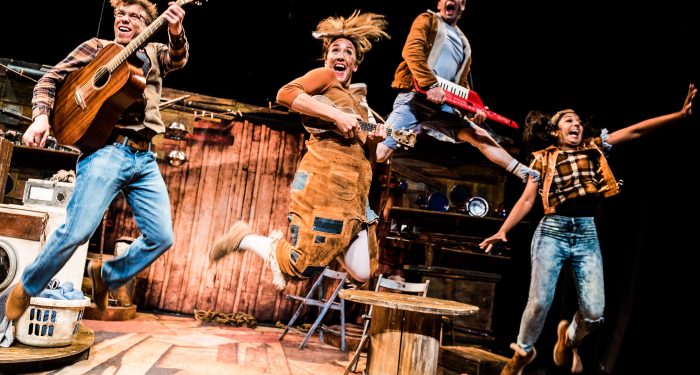 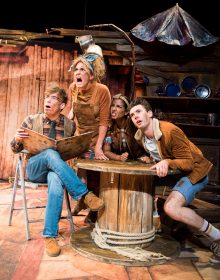 STIG OF THE DUMP 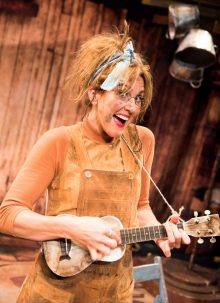 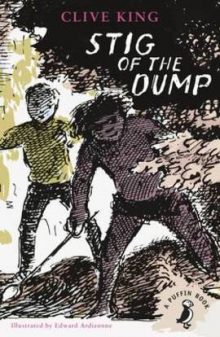 Sting of the Dump by Clive Kin (Puffin, 1963, illustrated by Edward Ardizzone

Stig of the Dump
*

The classic children’s tale of friendship between a young boy and a mysterious ancient caveman is brought to life in this fast-paced interactive show full of sing-along songs and puppetry.

Filled with discarded objects and broken bric-a-brac, a rubbish dump might seem an unlikely playground, but to a young boy, Barney, the “stones and bone, bottles, nuts and bolts” hold all the magical attractions of a treasure trove with the power to ignite his imagination. “I wish I lived here,” he says, as he gazes wide-eyed all around him.

But when Barney is plunged down a hole into a darker mysterious world, he encounters a strange creature and an enchanting adventure greater than he’d ever imagined is about to begin.

With the stage set in hues of gold and rusty brown that doubles as a cosy domestic scene of Barney’s grandparents’ home and the tantalising mysteries of the ‘Chalk Pit’, there’s plenty of visual action to entice the audience. The story is also perfectly pitched for young theatre-goers, with just short of an hour of playfully demonstrative acting  by the enthusiastic cast that includes one of CBeebies favourite storytellers Katy Ashworth as a sprightly Grandma, while Grandpa doubles his acting duties as puppeteer for Stig.

The audience are invited to participate from the get-go, as they are greeted by the sparring siblings, Barney and Lou, given a picture to colour and invited to turn into a paper airplane to fly to the stage. Pictures are then decorously hung on a washing line on the stage

As Barney’s visits to the pit become more frequent, the audience become privy to their secret friendship as it blossoms, but when Barney returns home he is teased by his disbelieving family about making up stories. Will his family ever believe Barney or do they need proof?

Filled with musical interludes and plenty of chances for the audience to join in with sing-along action sounds – expect to be invited to get up on your feet and make some noise! – this is a charming adventure filled with old-fashioned charm yet still provides plenty of action to engage a contemporary audience.

There’s also a dramatic climax when an escaped tiger appears and Stig must come to the rescue of his friends. Props are used ingeniously, with a fluffy dusty depicting a fox’s tail and jam jars being piled on top of each other to represent a smoking chimney. “You guys know where I’m going with this, don’t you?” Barney asked his audience, to which one piped up with disarming honestly: “No.”

With its simple narrative and fun family dynamics, the cast pounce and prance around the stage, while Stig – artfully puppeteered to give a quizzical and sweetly naive nuance to his character – proves a charmingly enigmatic star of the show.

Adapted by Mike Kenny, one of UK’s leading writers in young people’s theatre (his Olivier Award-winning adaptation of The Railway Children for York Theatre Royal is currently enjoying an extended season at Kings Cross Theatre), this stage version of Stig of the Dump upholds the magic of the original novel, but recycled with a twist for its contemporary audience.

The highlight for young theatre-goers is that they are actively invited to get involved. And there’s also opportunity for selfies with the smiling cast at the end of the show.

Did you know? In the 19th-century in the UK, scavengers who collected unwanted waste items were known as ‘rag and bone’ men. Rag was any form of clothing made from cotton or wool. There was a vast market for the rags, such as carpet underlay, mattress stuffing, and seating in trains and buses. Bone was animal bone. As this was before the days of plastics, buttons on clothes were either bone or rubber. Also before World War II, most people bought meat on the bone. The meat was roasted to feed a family for two or three days, then the bones were boiled clean in a saucepan for soup, and then saved for the rag and bone man. The market for the bones was for fertilizer. It was burnt into a powder and sold as bone meal. The origin of the word bonfire is ‘bone fire’.

Author notes David Clive King was born in Richmond, Surrey in 1924. In 1926, he moved with his parents to Oliver’s Farm in Kent, on the North Downs, alongside which was an abandoned chalk-pit. His early education was at a private infant school where one of the teachers, Miss Brodie, claimed to have taught Christopher Robin Milne, and introduced Clive to stories about Stone Age people. Thereafter, he went to King’s School, Rochester; Downing College, Cambridge, and the School of Oriental and African Studies, London. From 1943 to 1947, King served in the Royal Navy, travelling widely before working as an officer of the British Council in Amsterdam, Belfast, Aleppo, Damascus, Beirut, Dhaka and Madras. Several of these exotic places provided material for his 19 children’s stories, but his best-known book Stig of The Dump was written during an educational job at Rye, East Sussex. Stig of the Dump is set where Clive grew up in Ash, Kent, and where he spent his childhood building dens. The chalk pit where Clive imagined that Stig lived is now part of a golf course.