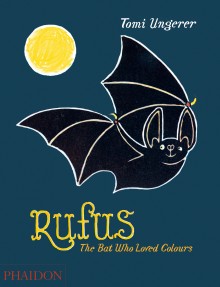 RUFUS THE BAT WHO LOVED COLOURS 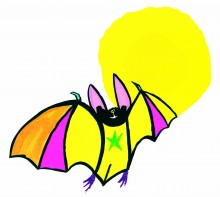 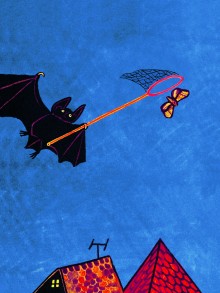 Rufus The Bat Who Loved Colours

A life lived in limited hues is the lot of nocturnal bat, Rufus, until one day he discovers a whole new world in a wonderful kaleidoscope of colours beyond his usual shady cave. Can he ever content himself with darkness again?

Imagine seeing an explosion of vibrant colours when your world has hitherto been filled with shades of grey and black. Such is the dazzling effect on Rufus when he happens upon an open-night cinema where the scenes appear in glorious technicolour. It gets Rufus thinking, wondering what other delights daylight might hold, so he decides to shun sleep and investigate…

And wow! What a colourful world of exotic birds and wild blooms opens up before Rufus’s eyes. But now his own signature black feels a little drab,
so he sets about sprucing himself up
in a coat of so many colours that Joseph would be envious

Painting his wings in sunny hues of orange, gold and bright pink and a painted star on his chest, there’s a touch of the superhero about Rufus (Mmm, a bat superhero: now there’s an idea!). But he soon discovers there are drawbacks with his new dynamic ‘look at me’ style as he gets caught in some unfriendly fire.

Cue Dr Tarturo, the most debonair of fellas – behatted, bespectacled and with one of those fancy twirly moustaches – who kindly takes Rufus in, and tends to his wounds. But before long, as the sun starts to hurt his eyes and give him headaches, Rufus starts to yearn for the familiar comfort of the dark cave that he calls home.

This charming tale of friendship and acceptance, first published in 1961, is full of rich contrasts of dark and light, with Ungerer’s central character Rufus exuding a cutely cheeky personality, make even more appealing by his heart-shaped snout and smiley face, while the swirly typography of his name gives a hint to a Gothic, possibly vampire, past…

Did you know? Bats are flying mammals. While some mammals, like certain possums and flying squirrels, glide, bats are the only mammals capable of continued flight.

Fun fact Bats ‘see’ in the dark using a special skill called echolocation. Bats make noises and wait for the sound waves to bounce back off objects (an echo), if it doesn’t bounce back then they can safely fly forward. They can tell the distance of various objects by how quickly the sound waves bounce back to them.

Author notes Born in Germany in 1931, Tomi Ungerer is one of the world’s most famous and best-loved children’s authors. He is an illustrator, writer, designer, toy collector and archivist of human absurdity, whose work spans storybooks, poster design, political campaigns and film. Awarded the prestigious Hans Christian Anderson Medal for services to children’s literature, Tomi divides his time between Ireland and Strasbourg, France, where the Musee Tomi Ungerer, devoted exclusively to his work, opened in 2007.

Publisher notes Founded in Vienna in 1923 by Dr Bela Horovitz and Ludwig Goldscheider, Phaidon Press is the premier global publisher of the creative arts with over 1,500 titles in print. Working with the world’s most influential artists, chefs, writers and thinkers, Phaidon produce innovative books on art, photography, design, architecture, fashion, food and travel, and illustrated books for children. Phaidon is headquartered in London and New York City.