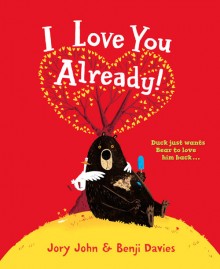 I LOVE YOU ALREADY 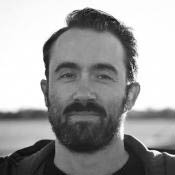 I Love You Already!

It’s the weekend, hurrah! And Bear just wants to kick back and relax, spending a little quality time on his ownsome. The only trouble is that best buddy Duck has rather different plans…

You can just sense Bear’s keen anticipation of having a lazy day, as he pads around in his dressing gown while his cuppa brews: his big plan for the day is to do nothing! Duck has also got definite plans about how he sees his day panning out – and it’s poles apart from Bear’s.

But Duck is not one to be put off and in his inimitable style, he determines to badger Bear until he gets what he wants.

With their chalk-and-cheese personalities Bear and Duck make a delightfully comical odd couple: adrenalin junkie meets slow plodder, if you like. Duck, with his incessant chitter-chatter, is full of bright ideas and is eager to please while Ol’ Bear just hankers after the quiet life

There is plenty of visual and verbal comedy in their polar opposites, from Bear’s classic ‘straight to camera’ look of emploring disbelief (to which Duck is delightfully oblivious) to their to-and-fro banter, as Duck proffers multiple suggestions to which Bear invariably replies with a deadpan ‘No.’

But this is a story of buddies, albeit bickering ones. In the end, when Duck takes an accidental tumble in his enthusiasm to grab Bear’s attention, Bear finally takes time to give Duck the reassurance he needs: “You’re basically my family. I love you already.”

A warm and witty book about an unlikely friendship where opposites attract with a couple of underlying messages. There are times when we all like a little alone time, but there are also times when it’s nice to let the people you love know it.

Fun fact There’s some truth in the saying “opposites attract.” People are often attracted to their opposite on the Extraversion/Introversion and Judging/Perceiving scales – just like Duck and Bear! There is also the theory that our natural attraction to opposites is a subconscious way of forcing us to deal with the weaker aspects of our own nature. So maybe Bear wishes he was more spontaneous, after all?

Did you know? Every magnet has both a North and a South pole. When you place the North pole of one magnet near the South pole of another magnet, they are attracted to one another. When you place like poles near each other (North to North or South to South), they will repel each other. Why does this happen? Like gravity, electromagnetism is one of the basic forces in the universe.

Author notes Jory John is a New York Times bestselling author of books for both children and adults. He is a two-time E.B. White Read-Aloud Honor recipient. His work includes the New York Times bestselling novel The Terrible Two, the award-winning picture book Goodnight Already!, the national bestseller All my friends are dead, and a sequel, All my friends are still dead, which received the 2013 ALA Reluctant Young Readers Award. (Photograph of Jory John by Shelley)

Illustrator notes Benji Davies is an illustrator, author and animation director. His first self-penned picture book The Storm Whale won the inaugral Oscar’s First Book Prize in 2014 and was shortlisted for Booktrust’s Best Book Awards. His second, Grandad’s Island, won the children’s book category of the AOI World Illustration Awards 2015 and was crowned Best Picture Book and overall Children’s Book of the Year at the Sainsbury’s Children’s Book Awards 2015. Benji studied animation at university, and has since worked on a diverse array of projects, from picture books and animated short films to music videos, commercials and title sequences. Benji lives in east London with his wife Nina.
Previous article Next article