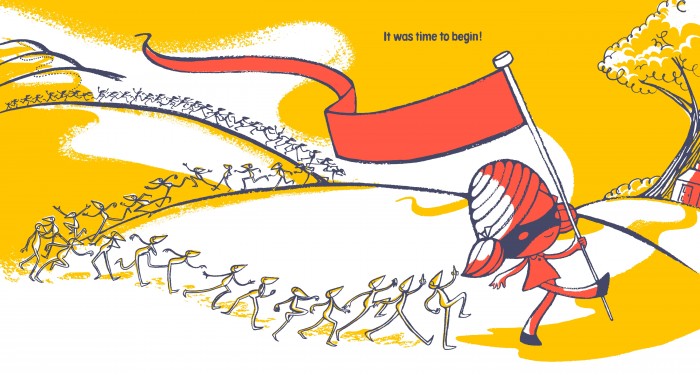 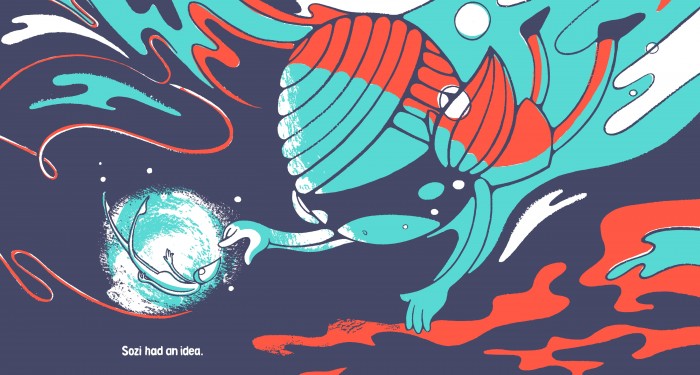 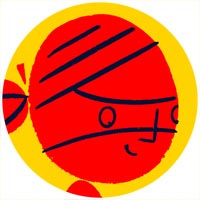 Portrait of the Artist by Rilla

Coming up with brilliant ideas is a doddle for bright spark Sozi: her head is literally swimming with inspiration! But when it comes to bringing those ideas to fruition, well, that’s another story. Though, actually, it’s this story…

Imaginative, ingenious, creative: Sozi encapsulates all these qualities with her head full of amazing ideas – each one of them personified into a pointy-headed little critter, vying for attention and desperate to the one idea chosen above all others.

Yet, when Sozi finally stops and tries to put her ideas into action, say for example, by creating a work of art, she soon finds that her attention wavers, her thoughts begin to wander and she ends up abandoning her idea with a “Hmm, maybe later.”

But the trouble with ideas that don’t come to fruition is that they soon dry up, so Sozi must galvanise her efforts and try again. And this time she is author of a very fine book and, more importantly, by seizing the moment she is also able to become author of her own destiny!

Written in a playful, sing-song text, this witty ditty runs along at a lively pace and exudes an upbeat mood of can-do optimism.

There’s a definite ring of the wonderful Dr Seuss in some of the upbeat rhymes that promote the idea (!) that anything is possible: ‘An idea over there… and one over here… They found those ideas everywhere!’

There’s a good dose of humour and comedy as Sozi grapples with her idea, and finally triumphs – but in the most unlikely way. The book that appeared to be coming to her rescue suddenly snaps shut with her inside. Could this be the end? Nah, as the text tells us: ‘Dear reader, don’t fret and don’t fear. We all know, after all, this was her idea.’

There is much to admire and ponder over in Rilla Alexander’s book. With her pigtails and ninja-style bandeau, the central character, the indomitable Sozi, is cuteness personified  – with a pinch of precocity. The theme of creativity and how the thought process works opens up lots of points for discussion and it’s filled with quirky details that give it a surreal quality. Children will love the suggestions that their ideas are funny little creatures – but I guess we do sometimes say, if the idea has legs, run with it!

With refreshing tones (it is printed using four colour pantones with lots of bright egg yolk yellow, turquoise and crimson red) the book feels both retro and modern at the same time; the illustrations are vibrant and playful, with clever cut-out details of a trompe l’oeil ‘eye’ on the front cover symbolising a metaphorical window into the workings and imagination of the mind.

I wonder whose clever idea that was?

Fun fact What do you say when a brilliant idea springs to your mind? The exclamation ‘Eureka!’, from the Ancient Greek word meaning “I have found it”, is famously attributed to the ancient Greek scholar Archimedes. He reportedly proclaimed “Eureka!” when he stepped into a bath and noticed that the water level rose—he suddenly understood that the volume of water displaced must be equal to the volume of the part of his body he had submerged.

Did you know? Illustrator and author Rilla Alexander has been making books since she was two years old. She used to tell the story to her mother who would type it onto Rilla’s pictures and make them into homemade books. Now Rilla gets her publishers to do this for her, but she still does the illustrations and words.

Author notes Rilla Alexander is an Australian born, Berlin-based designer and illustrator. She speaks at design conferences and leads workshops all over the world, including the 8-day Pictoplasma Academy. She was a founding member of Australian design collective Rinzen and her work has been showcased at Paris’ cultural mecca Colette, and at the Musée de la Publicité and the Louvre.

Publisher notes Flying Eye books is the children’s imprint of Nobrow Press. Flying Eye, like its parent company, is dedicated to delivering high quality design and production values with the aim of encouraging generations of children to love and cherish the beauty of a good book. 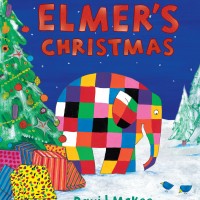