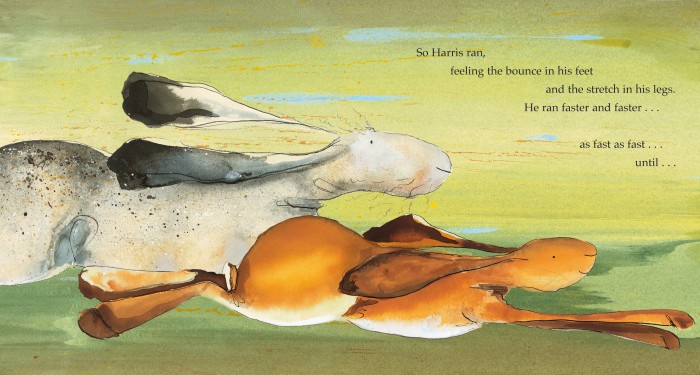 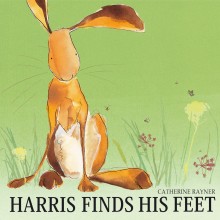 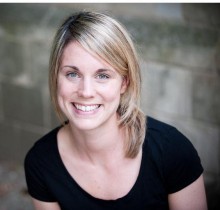 The inter-generational bond between grandparent and grandchild is tenderly told in this beautifully illustrated book about a hare named Harris and his silvery-whiskered Granddad, written by award-winning illustrator and author Catherine Rayner.

Whatever the reason, it’s not surprising that the “very small” Harris turns to his grandfather to ask: “Why do I have such enormous feet, Grandad.” And so the little hare’s Granddad gently proceeds to show Harris how, sometimes, the very thing you consider  to be your undoing could  turn out to be your saving grace.

“I’ve always had very large feet, so I am curious about them,” admits Catherine Rayner. “But this book is really about learning.”

Within a few hops, steps and jumps, Harris has learnt from his grandad how to hop “to the top of the world”, how his feet can shade him from the sun, and that “the most important thing about your big feet, is they help you run… very fast”.

Using silk-screen printed illustrations that literally bounce right out of the page, this book has a contemporary fairytale quality to it. And, as with all good fairytales, there’s a dark side to the story in the form of a shadowy wolf. “In real life, there is drama,” says Rayner. “Hares are such secretive, magical animals; here Grandad is teaching Harris that while there are dangerous things, Harris has everything he needs to stay safe.” And those big feet are going to come in handy.

In fact, Harris’s big feet saw him leap all the way into the pages of history as the winner of the 2009 CILIP Kate Greenaway prize. “I can’t believe it,” says Rayner, who was also shortlisted for the prize in 2006 with her first book, Augustus And His Smile. “You dream of winning something as big as the Greenaway, but you never imagine it could happen.”

However, there is one character Rayner particularly credits for the book’s success. “The characters I sketch are the ones who tell you their story,” she says. “I just pick up on what they want to do. It is always the character that comes first; the story follows. So, really, it is Harris who has helped me find my own feet as a writer of children’s books.”

Exploring the dynamics between young and old as well as the natural cycle of life, Harris Finds His Feet is a beautifully told tale with an ending that might just have you a little teary too… This is one book we think should be in every child’s Brilliant Books Collection.

More Hare-y Tales The parent-and-child bond is at the heart of another well-loved story starring two Nutbrown Hares, the classic Guess How Much I Love You. Read our review and save this to your own Bookshelf collection.

Author notes Award-winning author and illustrator Catherine Rayner studied Illustration at Edinburgh College of Art. She fell in love with the city and still lives there with her husband and young son. Catherine finds huge artistic inspiration in her pets and often uses them as models. But it was creatures of a wilder kind that inspired her first picture book, Augustus and His Smile – Catherine spent hours and hours watching and sketching tigers (in freezing temperatures) at Edinburgh Zoo!

As well as winning the 2009 CILIP Kate Greenaway Medal for Harris Finds His Feet, Catherine has been shortlisted four times for the award. She was also awarded the Best New Illustrator Award at the Booktrust Early Years Awards in 2006 and was named one of Booktrust’s ten Best New Illustrators in 2008. In 2010, she was the inaugural illustrator in residence at the Edinburgh International Book Festival. Her book Iris and Isaac won the UK Literacy Association Book Award in 2012.