Born in the French Alps in May 1961, Sophie the Giraffe is an icon of the baby world.

Recognised as an award-winning design time and again, 50 years on, she is now possibly more beloved than ever. Not only is she a toy, she is a teether, as well as a development tool: there are those spotty spots to focus on, as well as the cause-and-effect (squeeze-and-it-makes-sounds) lesson.

Made from 100 per cent natural rubber derived from the sap of Malaysian Hevea trees – commonly known as rubber trees – Sophie’s spots are made from food-grade paint, making this not only an eco-friendly toy, but also a parent-peace-of-mind friendly toy, too. As Vulli reports, “latex is natural, elastic and water-resistant; it is a renewable, sustainable resource and biodegradable”.

Sophie was even further embraced by infants and parents worldwide after the 2007 controversy regarding the materials used in manufacturing Chinese toys.

Nonetheless, there was some controversy regarding Sophie’s meeting of German safety standards. Although Sophie has always complied with EU safety regulations, the nitrosatable levels were considered too high for the German standards. As a result, all Sophies produced since March 2012 have been to the even more eco-friendly standards of the even-stricter German standards.

Designer Details Vulli is the ‘parent’ of Sophie, and was founded in 1946. They create a range of Sophie related products including a magic lantern where Sophie is projected onto the lampshade, which then rotates due to the heat created by the lighbulb, as well as music boxes and snow globes, all in collaboration with Trousselier. 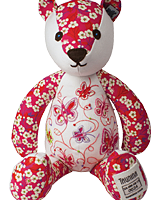