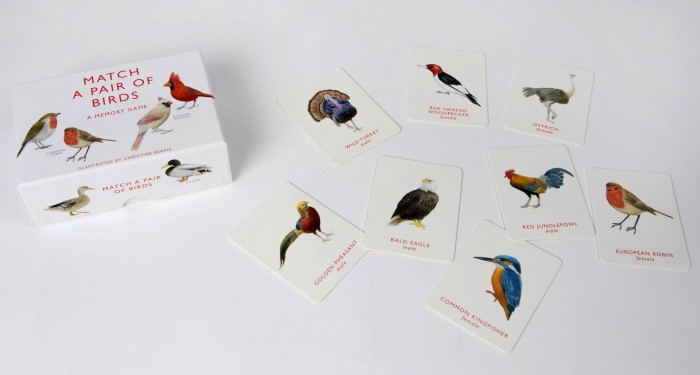 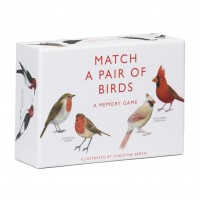 MATCH A PAIR OF BIRDS

A feast of feathered friends

Match A Pair of Birds

The traditional memory game is given a twist with an avian assortment of pairs that marries together the male and female of each species.

How’s your expertise on eagles, your knowledge of kookaburras or your nous on barn owls? Certainly, a fascination for feathered creatures will stand players in good stead with this memory game, but you’ll need to double your knowledge!

This dating game of matching pairs doesn’t call for players to match up two identical pictures. Instead, teeny twitchers need to create a happy union of male and female birds

There are 25 matching (or rather ying and yang) pairs in total, from the Atlantic puffin to the Emperor Penguin (interestingly the female is not an ’empress’) to the European Robin, the Red-Headed Woodpecker and the colourful Scarlet Macaw.

Each bird is wonderfully illustrated and matching up the pairs is great fun – as is spotting how the male and female differ – or, as in the case of the sweet red-breasted robin, are rather more difficult to tell apart. The name and gender of each bird is handily printed on the front of each card.

The accompanying booklet provides fascinating facts on each species and points out some of the male-versus-female foibles, for example, the male Golden Pheasant has a spectacular plumage of green, gold and scarlet, while the smaller female is mottled brown for nesting camouflage.

How to play Place the cards face down. Then players take turns to use their concentration and memory skills to turn over two cards, trying to locate where corresponding male and female birds of the same species are located. The player who matches and collects the most pairs wins.

Fun fact The biggest bird in the world is the ostrich, which can grow up to nine feet tall, but they’re not necessarily the brightest bird in the nest. In fact, their eyes are larger than their brains.

Did you know? Hummingbirds are the smallest birds – so tiny that one of their enemies is an insect, the praying mantis. The hummingbird’s brain is proportionately the largest among birds. Along with the loon, swift, kingfisher and grebe, the hummingbird cannot walk, but it is the only bird that can fly backwards.

Keep in mind Although the set covers a good geographical spread, not all birds will be native to your locale, so you may not have the opportunity to put your bird-spotting skills to use with real live birds – although it is a great excuse to travel!

What Kids Love Memory games are a perennial favourite, especially as children’s skills improve and they get better at playing!

What Parents Love The educational element is always a boon, especially when there’s interesting and fun facts for everyone to learn about our feathered friends. You can also indulge in some bird-spotting when you’re out and about – don’t forget to pack the game for your summer camping trips.

Illustrator notes Christine Berrie gained a First Class BA (Hons) Degree in Visual Communication at the Glasgow School of Art before studying at the Royal College of Art, London, graduating with a MA in 2002. Since then, she has worked as a freelance illustrator, creating drawings and imagery for a variety of clients, including The Guardian, The New York Times, Time Out and Penguin Books. Her work has also been exhibited at the Pentagram Gallery, the DesignersBlock: Illustrate Festival and the AOI Images Exhibition. Christine is based in Glasgow, Scotland.

Designer details Established in London in 1991, Laurence King Publishing is one of the world’s leading publishers of books on the creative arts, producing books that are acclaimed for their inventiveness, beautiful design and authoritative texts. They produce books on advertising, architecture, art, fashion & textiles, film & animation, graphic design, interior design, photography and product design. In 2011, Laurence King launched their first gift products developed with some of the world’s best illustrators and designers. 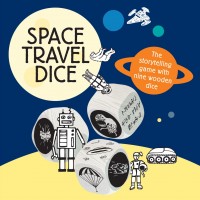 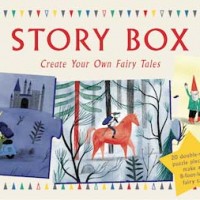