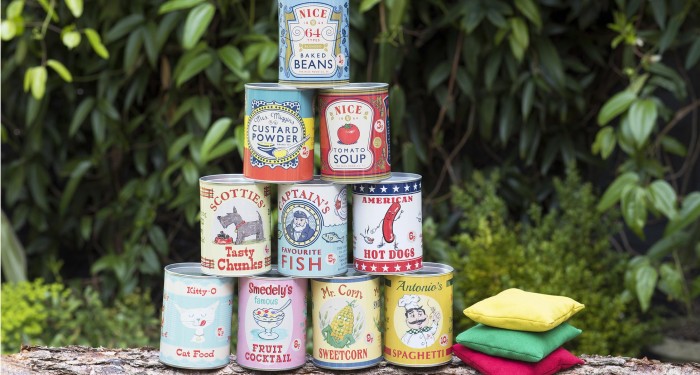 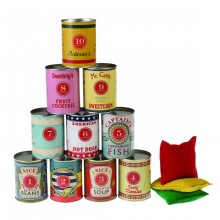 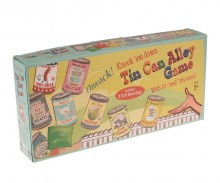 For shootin' and shoppin' fun

Good old-fashioned fun doesn’t get any cooler than this vintage inspired Tin Can Alley set, great for knock-down games or for inspiring pretend shopkeeper play.

Line ’em up in a ‘full side wide’ stack, pile ’em high like a towering skyscraper, or create the classic pyramid ‘bowling’ stack: you can try them every which way you fancy. The real fun comes when you get to fling the beanbags and see how many tin cans you can knock down.

You may have to supply your own rickety fence – we’re thinking a kitsch touch of classic Americana here – or use an upturned box, then aim, fire – and hope for an almighty crash bang wallop as tin cans go a-tumblin’

With an air of the old Wild West (but substituting your pistol for beanbags), Tin Can Alley is a great outdoor game to play in teams, or as individuals. Play it in the garden or park, fete or festivals – and don’t forget to pack for camping trips!

The high quality tins are fully enclosed with no sharp edges, and each one is decorated with wonderfully retro labels – some of which bear a passing resemblances to a certain food company’s famous ’57 varieties’. Favourites include the American Hotdogs, Scotties’ Tasty Chunks, Kitty-O Cat Food and Antonio’s Spaghetti. Each can is numbered, so players can tot up their score.

And when rain stops outdoor play, the colourful tin cans can be used to for pretend play where your child can create her very own deli of delights!

How to play Tin Can Alley can be played by any number of players, in teams or individually (great if you want to perfect your aim by putting in a little extra training). The ‘rules’ can be adapted to suit different ages and abilities, for example, younger players can stand closer to their target and have additional throws. Totting up scores according to the numbers on the tin cans adds another level to play – and some sneaky maths practice into the bargain!

Keep in Mind… There is a physical side to the game and the tins can be noisy when they come crashing down (but that’s all part of the fun!). Any competitive sport has the potential for friction and disappointment for the loser. On the plus side, being gracious in defeat is a handy life skill.

What Kids Love Letting off steam and that feeling of triumph when the tin cans come tumbling down. Hotshots will also enjoy seeing their skills improve and can keep a note of their ‘Personal Best’ to see if they can better it.

What Parents Love This really is a fun game for all ages so parents are likely to enjoy the sport as much as the younger crowd. The fact that the game is versatile for pretend play, and that there’s a chance to practise counting skills is an added bonus.

Fun fact Despite their trigger-happy reputation, cowboys – also known as cowpokes, cowpunchers, cowhands and buckeroos – were more likely to settle a disagreement with their fists than their guns. They also had a gentler side, and would sing lullabies by the campfire to soothe and settle  their cattle. Aw, ain’t that sweet.

Did you know? Cowboys had their own lingo and slang words. Onions, for instance, were often called “skunk eggs,” while beans were referred to as “Pecos strawberries” or “whistle berries” – one witty fella even called beans  “deceitful berries” because they talk behind your back! Biscuits were “hot rocks,” “soda sinkers,” or “shotgun waddin’,” coffee was “brown gargle,” and pancakes were “splatter dabs” or “wheelers.” Yee-ha!

Designer Details From a market stall heritage (albeit in one of London’s trendiest settings in Notting Hill), Rob and Eri set up business in 1980 under the guise of Rex International, with a mission to travel the globe to find interesting and unusual things to bring back for their customers. After many trips to south East Asia, the underground car park they’d rented in Kentish Town (which flooded whenever it rained) became too small to store all their goods, and they moved to a warehouse where they continued to expand, selling home furnishings and artefacts from all over the world. In 2004, they created a design studio to manufacture their own product ranges, launching their dedicated online emporium Dotcomgiftshop in 2005, selling a gorgeous collection of vintage-inspired gifts, toys, interiors and homeware.