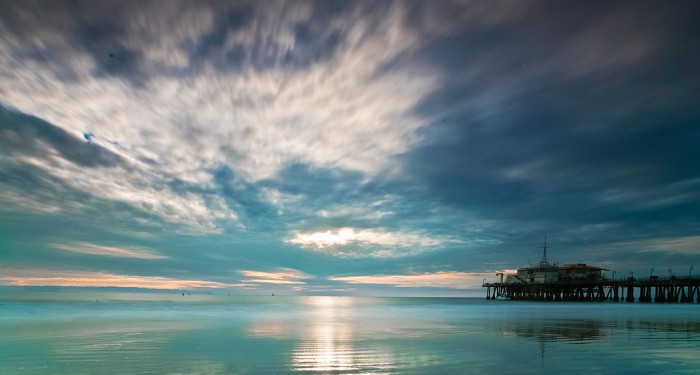 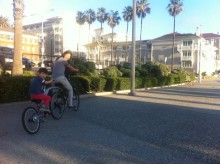 Get your kicks at the end of Route 66!


Playland Arcade – even under-threes can join in the fun!

If you’re heading to Los Angeles with the family, Santa Monica is a brilliant stopover for a few days of star-studded rest and recuperation. With its impressionist-style pink-and-ochre sunrises swelling over the horizon, perfect-for-wading waves lapping at the sand and bronzed Baywatch-style surfers ambling the shore, it’s an idyllic place for the kids – and you – to take in those jet lagged early starts, late evenings, or even impromptu midnight wakings.

After you’ve taken a roll in the picture-perfect waves (or just watched someone else partake) be sure to head along the white sandy shore to historic Santa Monica Pier with its solar powered ferris wheel turning gentle pirouettes over the water’s edge.

Although prettily picturesque now, Santa Monica Pier originally started with a rather less-pleasant function. In the early Twentieth Century the 480-metre-long pier was built as a ‘cover up’ for a pipe that ran treated sewerage out to sea. Fortunately this ceased in the 1920s, after which time the pier became the realm of recreation for stars including Marilyn Monroe, Charlie Chaplin and Olaf  “Oli” Olsen (the original Popeye).

The ultimate neighbourhood playground, Santa Monica Pier is famous for beach volleyball, muscle men, skateboarding and – since 1998, being the End of the Trail for Route 66. There is endless summer fun on offer, from amusement park rides and restaurants to an aquarium
and trapeze school

I started my West Coast adventure, wind in my hair, pedalling a tandem bike alongside my six-year-old, who squealed with excitement. The five kilometre bike path weaves its way from flashy Marina Del Rey, through the oddities of Venice to sunny Santa Monica and along the breezy beach front – a brilliant way to roll in this elegant Los Angeles’ neighbourhood.

Once we’d kicked down our bike stands, we headed straight for the ferris wheel at Pacific Park – the oceanfront amusement park that literally sits out over the Pacific Ocean on Santa Monica Pier. Here the rides include Inkie’s Pirate Ship (no height restriction with chaperone), a Sea Dragon, futuristic ‘bumper’ cars (i.e., not-so-very-bumpy, yay), and Duster-style Sea Planes for the whole family to fly. Kids of all ages will be enticed by the flashing lights and classic skill testing games in Playland Arcade next door – we say, bring on the skeeball family championship! – as well as the motorbike rides that even two-year-olds can master (with a little holding from parents). A few arcade games and carousel rides later and we’d been transported back to an older time when skeeball was the be all.

Beyond the old-school amusements, you can also take time out to spy the local sea life at Santa Monica Pier Aquarium with its ocean window into the world of more than 100 species of local marine animals and plants; Tuesday, Friday and Shark Sundays are ‘feeding days’, so if this is on your list, plan around this schedule!

At the other end of the spectrum, if you want to catch yourself a seabass for supper, you can jump in hook, line and sinker at the Bait and Tackle shop. Or do it the easy way and dine at one of the pier’s many restaurants – the latest opening is Ristorante al Mare where seafood is not only on the menu but in the name…

If you like the idea of running away with the circus (it is Hollywood after all), then the  New York Trapeze School, which is located right here on the Pier, could be just the spot to take the kids. Here you – and the kids – can learn everything from trampoline tricks and juggling skills to sword play techniques and walking on stilts; and of course there’s always acrobatics and aerial skills. Children as young as four can participate (with a signed waiver form for all participants, signed by parents for under-18s); there are also private group classes available. You will have to pay the minimum of 10 participants, although you can then select various techniques that will be relevant for the ages and interests of your group.

As for my family…. well, we cruised the pier asking the local fisherman what they’d caught for the day, sucked down ice cream sodas and gasped at the muscle man who had a giant yellow snake coiled about his neck before feeding the already fattened sea gulls with our burger crusts. Good old fashioned family fun.

Why visit A sea change from the more manufactured theme parks in a very stylish yet liveable neighbourhood of Los Angeles.

Who is it best for Toddlers through to adults.

Top tip Time your ride on the ferris wheel so you can watch the glorious sunset from the top. Before you plan your visit, take a look at Santa Monica Summer Specials for daily activities and festivals as well as local offers from the restaurants and attractions at Santa Monica Pier.

Facilities There are public toilets on the pier as well as showers, lockers and change rooms on the beach open from 05.00 until dusk plus plenty of restaurants and eateries lining the pier.

Our favourite bits Riding the tandem bikes was giggly fun for everyone, and watching from the end of the pier as the roller coasters wheel up-and-over the ocean offers a wonderful moment for contemplation, and you can quickly put a smile on everyone’s face at Soda Jerks, a 1920’s shop front with a menu of home made sundaes, shakes, malts and ice cream sodas.

While you’re here Take a ride on at least one of the almost all-ages attractions in Pacific Park and don’t forget to take a photo of the family beneath the signpost for the end of famous Route 66! You can then tick the bucket list and find the start – in Chicago.

In the area Stroll to nearby Third Street Promenade for some retail therapy where you will find the likes of local boutiques Johnny Was (for boho-chic) and American Apparel – how very fitting!, as well as Puzzle Zoo for brilliant toys, or Marbles: The Brain Store for mind-stretching games. 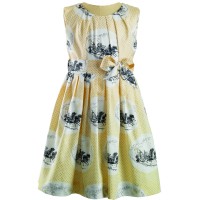