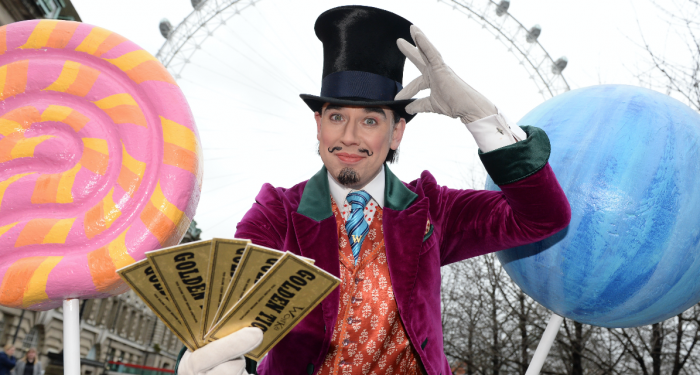 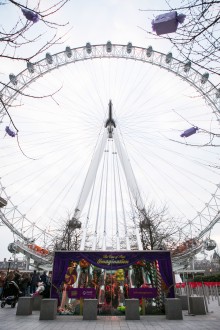 THE VIEW OF PURE IMAGINATION

Every half hour from
midday to 5pm

Create your own crazy confections


Fun with your capsule guide

If there’s one thing Willa Wonka knows about, it’s CHOCOLATE! So no prizes for guessing that he’s a big fan of Easter. Now fellow chocoholics can indulge in a delightful seasonal experience with one of Dahl’s most famous character and one of London’s most iconic attractions, The London Eye.

There’s a sense of magic in the air from the moment you start your journey through the tree-lined promenade that leads to London’s iconic wheel. Are those mysterious exotic birds nestled among the branches? On closer inspection, we realise that they are giant sweeties in delicate shades of lavender and lemon.

Who could be responsible for the quirky shower of sugary delights in the trees? None other than the world’s most famous confectioner of all time: Mister Willy Wonka. Welcome to the world of Pure Imagination

There are more tell-tale shades of golden yellow and purple inside the Riverside Room, where a signature giant top hat is evidence of Mr Wonka’s hand (or maybe his head?). At the tables, decorated with an eye-catching array of twirly lollipops and glittering bonbons, are candy-coloured tins crammed with coloured crayons and pencils. Our mission? To create the craziest confectionery we can think of. Joe goes for a giant rainbow-coloured Gummy bear, standing next to a 7ft stick man to give a sense of scale, before heading off to pose for a souvenir snapshot.

Pre-flight fun and festivities finished and prerequisite golden tickets in hand, we’re ready to head off with our guide – a very jolly story-telling actor in a red boiler suit and bowler hat – to take to the skies for a 20-minute twirl on the London Eye.

Our guide, a ‘professor’ of sweet inventions at Willy Wonka’s factory, told the children he needed their help. He needed inspiration to invent new confectionery concoctions, inspired by the views of London’s most famous attractions (cue jokes about Pic-a-fizzy Circus and Best-mints-ter Abbey).

While the grown-ups used the handy interactive tablets to identify the sights as the capsule moved up and the expanse of London was revealed below like a living map, the professor had a much more fun way of engaging youngsters in a game of spot-the-famous-building. In keeping with the Easter theme, he assured us that, no, that was not the Gherkin but a giant Easter Egg! He also pointed out important buildings like the Houses of Parliament where he explained politicians make all sorts of important decisions “like whether we should have white or milk chocolate inside our Easter eggs.”

There was also lots of playful quizzing that kept the children entertained, and a bit of flitting from one side of the capsule to the other. There was even a game of hide-and-seek which, when you consider the compact nature of the capsule, was quite a big ask but our guide playfully pretended he couldn’t see the teeny legs protruding from the central bench.

And, as our capsule came back to the ground, the kids were chirping along to an action song about Big Ben, Buckingham Palace and the London Eye, feeling quite giddy – not with vertigo, but with excitement from their whistle-stop action adventure.

Why go? For breathtaking views of London with plenty of fun and frolics on the side.

Who is it best for? Everyone: who doesn’t love a spectacular panoramic view of London from 135 metres in the sky. Fans of Roald Dahl will definitely appreciate the quirkier details of the immersive experience.

Top tip Book online for the best deals and the latest multi-buy offers.

Our favourite bit A twirl on the Eye is always fun. We like to see if we can spot the green dome of our local church, and it’s fun to see familiar places from unfamiliar angles. We also enjoyed munching on our free Hotel Chocolat ‘Egg on Toast’ Chocolate Lollipop.

While you’re there Stroll along the Southbank to visit The Wondercrump World of Roald Dahl interactive experience at the Southbank Centre (advance booking necessary) or head across Blackfriars Bridge to continue your Charlie and the Chocolate Factory theme with a Willy Wonka-inspired Afternoon Tea at One Aldwych.

Did you know? The London Eye is often mistakenly called a Ferris Wheel, but it is not. Firstly, because the capsules are completely enclosed and climate-controlled. Secondly, the capsules are positioned on the outside of the wheel structure and are fully motorised. And finally, the entire structure is supported by an ‘A’ frame on one side only, making it the world’s tallest cantilevered observation wheel. So now you know!