The Family Heaven package including two rooms, welcome champagne, smoothies and cookies for children, a selection of video games and traditional English breakfast costs £840 per night. The Living Room in the Linley Suite
 The elegant exterior of Claridge's
 The Assouline Room with its library of books
 The entrance to Claridge's
 The computer desks in The Map Room
 Claridge's Foyer – the least formal of the dining options

With stunning Art Deco décor, a flamboyant history and the royal seal of approval, Claridge’s is a luxury haven in the heart of London. Your child will be treated like a mini majesty, and you won’t feel too shabby, either…

From the moment you swish through its famous twirling glass door, Claridge’s welcomes you with open arms – especially if you’re under three feet tall. From the smart top hat-and-tails doorman who ushered us in, to the reception staff who already knew my son’s name and greeted him with a playful “We were expecting you, sir,” you can’t help but feel that you’ve landed somewhere rather special.

During its illustrious 150-year plus history, Claridge’s has played host to international royalty and foreign dignitaries, Hollywood starlets and the literary elite, winning royal favour with Queen Victoria (who visited Empress Eugenie, wife of Napoleon III, here), the Queen Mother and the Queen, as well as monarchs from around the world.

It is said in 1947, a diplomat telephoned Claridge’s and asked to speak to the King. “Certainly, sir,” was the response. “Which one?”

There’s something about the history of the hotel that makes you wonder just who might have walked in your footsteps… These days, you might bump into Kate Moss, Brad Pitt, Marc Jacobs or Madonna, while previous guests have included Audrey Hepburn, Cary Grant, Bing Crosby, and Katherine Hepburn who, in the 1950s, had to use the staff entrance as the strict dress code barred her from wearing trousers in the lobby!

And what a splendidly impressive affair this lobby is. The sweeping Art Deco staircase was designed to accommodate two flouncy ball gowns walking side by side – a sign of its glamorous heritage. Whilst I imagined how many of Gatsby’s femmes fatales might have shimmied down those steps in flapper dresses, five-year-old Joe was more excited to discover that the black and white marble floor was perfect for an impromptu game of hopscotch.

Our adjoining suites (the stylish Linley Suite and adjoining Art Deco suite) were so spacious we had three front doors to choose from – and yes, we couldn’t resist opening every one of them to wave at one another down the long corridor. As we took the grand tour, we oohed and aahed over the sumptuous furniture and the grandeur in the traditional living room with its handsome mantelpiece and open fire. The bedrooms had huge bouncy beds with crisp cotton sheets and big fluffy pillows, and the elongated bathrooms – all handsomely stocked with Bamford Natural and Organic toiletries – gleamed with marble and sleek silver fittings.

In the Art Deco suite – which teenage Grace nabbed as her personal residence – period craftsmanship in the curved wooden cabinets and wardrobes and magnificent Art Deco mirrors sat alongside the modern comforts of flat screen TV, Wii (already stocked with kids games) and an iPod docking station. There were handwritten welcome notes and an inviting box of Jeff de Bruges London chocolates – delicate squares of chocolate featuring London icons from Big Ben to a furry hatted Beefeater.

On the bed lay gifts. For Joe  – a London Routemaster toy bus, a teeny pair of slippers, a Claridge’s bear and brolly, themed games (design your own hotel and dress a paper dolly with the signature Claridge’s monochrome zigzag design) plus a Guy Fox London Children’s Map. Grace meanwhile oohed over the white fluffy towel that had her name embroidered on it – she felt quite the Hollywood starlet! For me, fresh flowers, a fruit basket, handmade Claridge’s chocolates (thoughtfully replaced each day after we’d scoffed them!) and a bottle of Laurent Perrier champagne on ice. Needless to say, we all felt very special.

After settling into our lavish suites, we were treated to a sneaky peek into the workings of the Claridge’s kitchen, under the auspicious guidance of executive chef Martyn Nail (whose grandmother – just by the by – was housekeeper at Highclere House, the film location for Downton Abbey). While I partook of a flute of chilled rose champagne, Grace and Joe plucked apples from a big crate, popped them into the giant juicer, core and all, and, hey presto, out came a spurt of freshly squeezed juice. Joe pronounced the frothy elixir the most delicious he’d ever tasted. Then it was a matter of donning Claridge’s aprons and chef hats as Grace and Joe had a go at being sushi sous-chefs, rolling up a rainbow assortment of carrots, cucumber and salmon in sticky rice and seaweed.

The evening’s dining took place in The Foyer restaurant, the less formal of Claridge’s dining options. Our handmade sushi was served up as hors d’oeuvres – though I suspect Martyn may have snuck in a few he’d “made earlier” as they looked remarkably neat and uniform on the platter. Our cosy, corner banquettes were the perfect vantage point for a spot of people-watching – you never know who you might spy! – while Joe discovered that the padded backrests, buttoned in a pouffy diamond pattern, provided the perfect hiding place for individual Lego mini figures, straight-jacketing each one into the cushioned recesses, much to the waitress’ amusement.

Our food – succulent fillet steak, served with hand-cut chips and French beans, and a cute oblong pizza for Joe – was perfect. For dessert, I suggested Grace and Joe might like a Knickerbocker Glory – they’d never heard of it before – but instead they opted for their favourite – scoops of mango and raspberry sorbet. Of course, this is Claridge’s, so it came with a flurry of fresh berries atop a wafer-thin, buttery shortbread biscuit and a helter-skelter twirl of white chocolate – all devoured within minutes. Thank goodness we only had to waddle up the staircase  (perhaps another reason why it is so wide?) back to the comfort of our suites, where we all flopped on the beds, flicked on the TV and settled cosily in for the night.

However, just outside those twirling doors, the proximity to chic shopping on Bond Street, Selfridges on Oxford Street, as well as toy shop favourite Hamley’s makes Claridge’s ideal for shopping, not to mention visiting the British capital’s museums and West End attractions. The knowledgeable concierges – there are a host of them – will soon arrange excursions, theatre tickets, transport (limousine an option, naturally) or anything else your heart (or child) desires. What’s more, the hotel’s central location means you can soon be taking a stroll in Hyde Park, where there’s boating on the Serpentine, horse rides and a playground, while only a short distance on, the brilliant Diana, Princess of Wales Memorial Playground in the north west corner of Kensington Gardens will beckon children of all ages with its superb variety of adventure play equipment.

However, the call of our temporary palatial home grew ever stronger, and so it was, armed with new Lego purchases and a clutch of glossy magazines, we returned to spend an idle afternoon of leisure, languishing on the sofas and popping the occasional grape. The ultimate indulgence was an afternoon trip to the sixth-floor spa (and an excuse to travel in the gorgeous old-fashioned elevator), where an hour-long Sisley facial left me feeling divinely revived and rejuvenated.

With children, one should be warned that a stay here will be setting the lifetime benchmark at a gold standard. These days, if Joe is unimpressed with any hotel, he simply says “Well, it’s not Claridge’s, is it?” Indeed Spencer Tracy, put it best when he famously said: “Not that I intend to die, but when I do, I don’t want to go to heaven, I want to go to Claridge’s.”

Design One of the world’s iconic hotels, Claridge’s had its modest beginnings in a single house-turned-hotel at 51 Brook, owned by William and Marianne Claridge. In an ambitious move to expand their business, they bought the adjoining five buildings, which were developed by CW Stephens, the architect who designed Harrods, opening the new and expanded Claridge’s in 1856. During the late 1920s, at the height of the flamboyant Jazz age, Claridge’s invited Art Deco pioneer Basil Lonides to redesign the restaurant and several suites to reflect the glamorous age. His magnificent engraved glass screens still adorn the restaurant today. By 1929, the hotel was a world-renowned showcase for top British designers. Oswald Milne designed a new main entrance, removing the original awkward carriage drive to create a façade of Roman stone and mirrored foyer. Another modern makeover occurred in 1996, when New York-based designer Thierry Despont spruced up the foyer area in modern Art Deco style with a stunning chandelier by glass sculptor Dale Chihuly, whose works also hang in the V&A Museum and the Rockefeller Centre. Recent years have also seen collaborations with fashion designer Diane von Furstenberg and David Linley.

Rooms There are 203 rooms, including 67 suites. They all come with complimentary wi-fi, flatscreen television, as well as marble bathrooms with deep bathtubs; DVD players, iPod docking stations, laptops and games consoles are all provided on request. Extra beds for children (from £75 a night) and cots (free for under-3s) can be added to larger rooms. Rooms range from 32 square metres to 50 square metres, while suites run from 56 square metres to the expansive 267 square metres of the Brook Penthouse.

Eating Dining here is a somewhat formal affair; the least formal of the options is The Foyer and Reading Room where you can dress in smart casualwear. Here, there is all day dining from breakfast through dinner (opening hours 07.00–23.00). This is also where Afternoon Tea is served daily  at 15.00, 15.30, 17.00 and 17.30. Fera at Claridge’s is the newest addition to the restaurants, opening in May 2014 and Michelin star chef Simon Rogan is at the helm here delivering a menu with a focus on wild, seasonal ingredients. There is also an extensive in-room dining menu available 24 hours a day.

Facilities The gym is open 06.00–21.00 Monday to Friday and 08.00–20.00 weekends. It has nine cardiovascular machines, six resistance machines, as well as free weights and exercise balls. A personal coach is available to help boost your workout, and there are complimentary towels, fruit and juices. The spa offers a wide range of treatments including a selection of Sisley treatments. Babysitting can be arranged, from £8 an hour.

Afternoon Tea
Famed for its award-winning Afternoon Tea, this is a must within these hallowed confines. Often accompanied by the tinkling of chamber music (with the additional percussion of silver teaspoons on porcelain and the clink of champagne glasses), here you can choose from over 40 varieties of teas while you devour the neat little morsels filled with variations of smoked salmon, chicken, ham and cream cheese. Joe liked the ham but didn’t like the mustard – so the next round was delivered plain and simple. The cakes were delectable, too, while the apple and raisin scones, with copious amounts of jam and clotted cream were perfect. The service is impeccable, with discreet staff always on hand to offer “Another tray?” or a top-up of hot water for your tea, and it’s hard to resist. 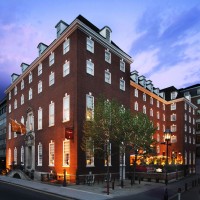