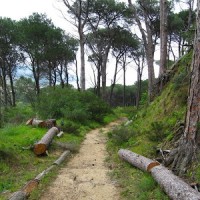 Between Kloofs Road and Camps Bay

Families who like a little walk with their picnic adventure

Destination The Glen at Camps Bay

Camps Bay is an area of Cape Town that is famous for its pristine white sandy blue flag beach, designer homes, chic residents and trendy restaurants, but it also has tranquil open spaces, including The Glen.

Camps Bay Glen, as its name says, is in Camps Bay on the edge of one of the Glens, right on the edge of a river, which flows down from the famous Table Mountain National Park and into the sea.

This park is a little gem hidden under a canopy of magnificent trees. My girls delight in playing Swiss Family Robinson whenever we come here, while my husband and I “get lost” beneath the rustling leaves

The big leafy trees and mountain stream that runs directly through the garden from Table Mountain – complete with waterfalls – encourages an amazing collection of birds and wildlife, too.

Top tip Take the stairs between Kloof Street and Camps Bay Drive – the path leads down into a wooded area.

Facilities None in the park itself, but it is a short walk to Victoria Road promenade and the facilities of the restaurants and shops there

While you’re in the area Be sure to visit Camps Bay itself. Not only is there a beautiful beach but great restaurants too.