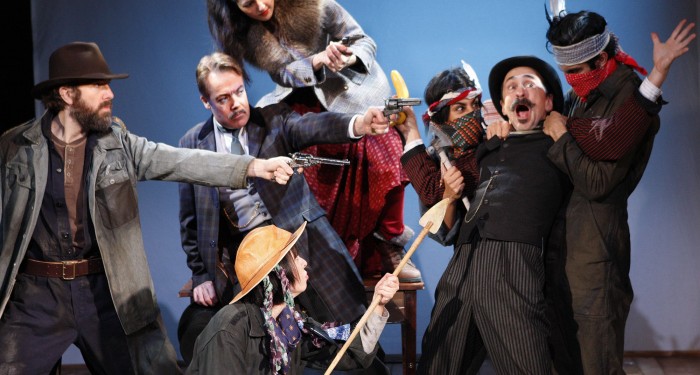 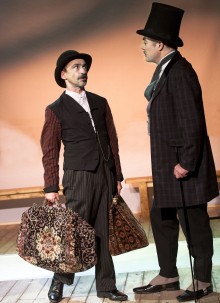 AROUND THE WORLD IN 80 DAYS

2 hours and 15 minutes
including interval 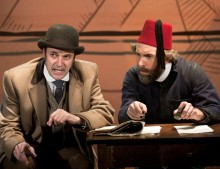 Inspector Fix on the trail
 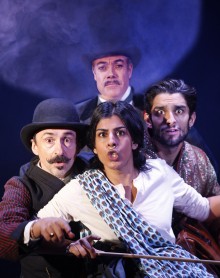 On the road to Calcutta
 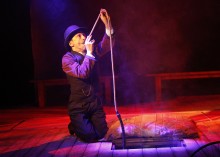 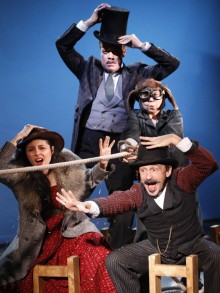 The race is on…

A stiff upper lip, a good dose of British reserve and an air of haughtiness defines the demeanor of millionaire Phileas Fogg, and yet he craves excitement in his otherwise predictable life. Perhaps an outrageous wager could do the trick?

The daily routine of wealthy gent Phileas Fogg is as regular as clockwork and every day has a sense of déjà vu. Rise early for a spot of daily constitutional before his trusted valet brings him his morning cuppa at just the right temperature. Uh-oh! Tea’s cold this morning, so it’s curtains for his trusted valet who is unceremoniously fired before you can say Alan Sugar.

That’s not to say that Fogg is an unpleasant man; he’s merely a product of his privileged upbringing. Wearing a super-elongated top hat to add to his already considerable height – think Abraham Lincoln –  Fogg quite literally looks down on the world of subordinates around him.

Although Fogg has everything, he is unfulfilled and bored. All that changes, however, when he sets himself a challenge to circumnavigate the world in 80 days – a feat never done before – risking his wealth and reputation on the high-risk wager.

Phileos Fogg yearns for something out-of-the-ordinary to alleviate the ennui of his predictable life and a whirlwind world tour should
do the trick. Does he ever doubt
that he will succeed? No, cool as a cucumber at all times, Fogg leaves
all the frettin’ and fussin’ to his
faithful valet Passepartout

Embarking on a long-haul trek that will take them from Europe to Africa, India, Japan, San Francisco and Liverpool before returning to London, Fogg and Passepartout are in a dramatic race against the clock. Obstacles in their way include storms at sea, showdowns in the Wild West, an adopted new passenger in the form of Mrs Aouda and mysterious puffs of smoke from an intoxicating pipe that almost scupper the entire trip!

Based on the classic “extraordinary adventure” by Jules Verne, this imaginative adaptation by Laura Eason provides plenty of comedy from the dogged pomposity of Fogg (played by Robert Portal) to the manic panic of Passepartout (Simon Gregor), who is reminiscent at times of Manuel in Fawlty Towers with his agitated hand waving. There’s also an amusing sub plot as hapless Inspector Fix’s (Tony Gardner giving us a detective in the comic mold of Clouseau) attempts to reveal Fogg as the great bank thief of London are an epic fail.

With a cast of eight playing more than 50 characters and imaginative props that include a moving walkway to provide an alternative to the actorly ‘walking on the spot’ and a vent hose that doubles as an elephant’s trunk. The atmosphere of various locations is also cleverly conjured up from the crazed honking and bell-ringing of Calcutta to the gun fire of the Wild West. With a strong central cast, it’s the cameo roles of drunken fisherman and spittin’ cowboy that provide some of the biggest laughs.

All in all, this is a high-spirited escapade filled with suspense, drama, comedy – and even a little unexpected romance as Fogg finally gets his gal.

Who is it best for? Globe-trotting adventurers who relish a challenge.

Top tip Pick up a programme to check out the map of Phileas Fogg and Passepartout’s route across the globe in 1892. There’s also a fun quiz and an inspiring quote from Monsieur Verne himself that should be the motto of all travellers: “Travel enables us to enrich our lives with new experiences, to enjoy and to be educated, to learn respect for foreign cultures, establish friendships, and above all to contribute to international cooperation and peace throughout the world.” Hear, hear.

Our favourite bit The St James Theatre is a wonderful space where the audience feel close to the action, which encourages interaction and funny impromptu quips.

Don’t go If you’re a homebody who doesn’t like the thought of travel.

While you’re there Schedule in a wonderful Snow Queen Afternoon Tea at Conrad St James (available til 11 February 11 2016, complete with a ‘magic mirror’ with salted butter shortbread, yoghurt cream, frosted blueberries and sugar shards, as well as ‘ the palace snowflakes’ with blackcurrant and cardamom cake, glittering meringue and icing sugar snowflakes.

Fun fact In the Back To The Future films, scientist Emmett “Doc” Brown is a self-confessed admirer of Jules Verne, mentioning his books as inspiration. When Doc marries fellow Verne admirer, Clara, they name their two sons Jules and Verne.

Did you know? In 1889, Jules Verne wrote an article called In The Year 2889, in which he imagined what life would be like 1,000 years in the future. He described  what we now see as radio or television news, long before either were invented. Marconi only sent the first radio signal in 1895. The first newscast was in 1920, 30 years after Jules Verne wrote about it.

About Jules Verne Born in Nantes, France in 1828, Jules Verne was fascinated by the idea of travel from an early age. After studying in Paris, Verne began writing plays supplementing his salary as a stockbroker. After a chance meeting with a like-minded publisher, Verne published Five Weeks in a Balloon, Or Journeys and Discoveries in Africa by Three Englishmen. Although Jules has not travelled himself, or was he a trained scientist, the mid 19th Century was a great time for new ideas and exploration. There followed a series of “extraordinary adventures”, set in all kinds of places. Verne wrote 85 stories in his lifetime, the most famous being 20,000 Leagues Under The Sea, Journey to the Centre of the Earth, and of course Around The World in 80 Days.

** WANT MORE FAMILY FUN THIS CHRISTMAS? ** Check out some of our other favourites in our Best Family Shows in London and 12 We Love Christmas movies 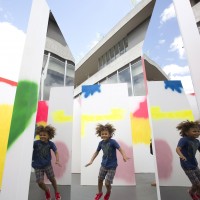 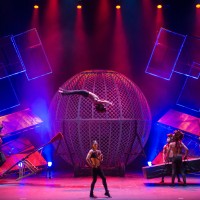