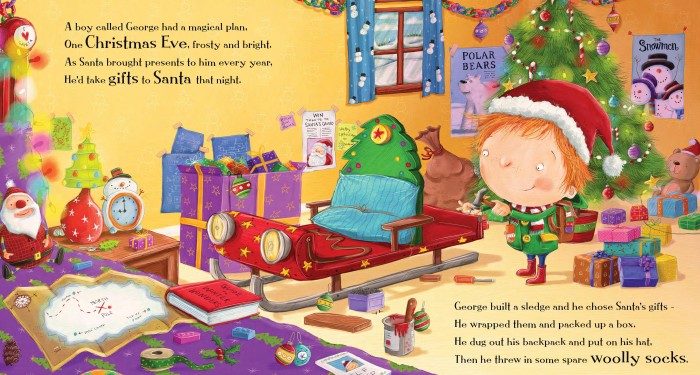 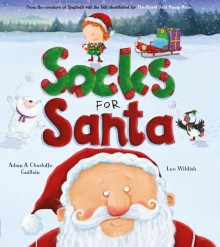 By Adam and Charlotte Guillain | Illustrated by Lee Wildish

What a thoughtful young fella George is! After receiving gifts from Santa every year, he thinks it’s time the tables were turned and he’s going to give Santa a present. But where will he find the Big Man himself?

A quest across a snowy white North Pole faces George as he seeks Santa to bestow some gifts. The jolly man in red is nowhere to be seen, but George does manage to enlist the help of some willing accomplices in the form of polar bears and penguins.

With his heart full of good intentions, George finds himself in charge of some unexpected crisis management which means the presents destined for Santa are used elsewhere. Could one final gesture will save the day?

Poor George is faced with elves in a panic, presents that need wrapping, and a snuffling Rudolf whose nose has stopped glowing. A touch of quick thinking and impressive teamwork comes to the rescue.

And of course Santa wouldn’t scold a boy who tried so hard – but George has one final gift to give. A pair of socks, albeit secondhand, is just the job to keep Santa’s toes cosy.

Written in lively rhyme with wonderfully vivacious illustrations to match, this is a heartwarming and funny tale filled with appropriately festive cheer.

Did you know? According to the poem A Visit from St. Nicholas written by Clement Moore in 1823, Santa is described as a jolly old elf with cheeks like roses, a nose like a cherry and a round belly that shook when he laughed like a bowl full of jelly.