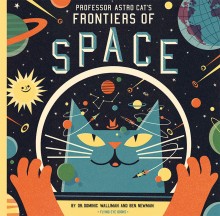 By Dr Dominic Walliman | Designed and illustrated by Ben Newman 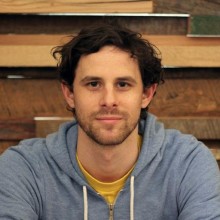 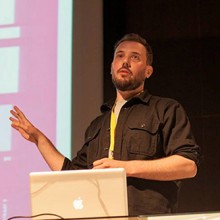 The starry skies above may hold a myriad of mysteries, but there’s also plenty of hard science and amazing astronomic facts to discover. With cat-in-the-know Professor Astro Cat as your cosmic guide, the sky’s the limit – and the universe is your oyster.

With British astronaut Tim Peake currently living and working on board the International Space Station for six months, and the recent discovery of a new planet, dubbed Planet 9, in our solar system, the excitement of space has been reignited for a new audience of star-gazers.

But space is a vast and complex thing, so how can you make it more accessible for children? Step right up, Prof Astro Cat, a funky feline with a formidable knowledge of all things astro and an  enthusiasm to share his expertise with budding space cadets.

Starting with the Big Bang, a mere 13.7 billion years ago, and rocketing through the glamour heydays of space voyage of the 60s up to the modern day, this brilliant guide is filled with fun facts and exciting info-graphics about the solar system and the entire universe – or at least, as much as we know about it. And of course it’s the unknown that makes it even more exciting!

Not since David Bowie brought us the cosmic ballad of Major Tom has space been presented in such a cool and stylish way. This space odyssy is the perfect introduction for dreamy star-gazers keen to ponder the
out-of-this-world wonders of space

With sections covering the Sun, Earth and the Moon, as well as their place in the solar system, there are plenty of funny little visual vignettes like a crying Pluto who’s just been informed he’s no longer a planet, and a hungry mouse putting the theory that the Moon might be made of cheese to the test) to keep the tone lighthearted and entertaining.

There is an immense amount of information contained in this book (including a handy glossary and recommendations for further reading) but all these facts are brought to life in imaginative and inventive ways that will engage a young audience without dumbing down in any way. For example, to give an idea of the relative size of different planets, there’s an info-graphic that depicts Earth as a cherry tomato, Jupiter as a watermelon and Mars as a pea, while the inhospitable environment and sweltering temperature of 460 degrees Celsius of Venus earns it the nickname of Earth’s Evil Twin.

There are quirky facts about the space race between the Soviet Union and the United States, with cosmonaut Yuri Gagarin as the first man in space and Neil Armstrong the first man to set foot on the Moon with his famous words: “One small step for man, one giant leap for Mankind,” and some speculative ideas about what space travel might look like in the future.

Alongside the sound science of astrophysics, there’s also room for a little pondering about alien life forms and the many, many mysteries of space that are still waiting to be solved.

And this fabulous book might just what inspires your child to become a cosmic adventurer of the future.

*** MORE SPACE ACTION *** Create cosmic playtime with the Discover Space Centre by Hape, reach for the stars with the Constellations Memory Game and invent your own adventures with the throw of the Space Travel Dice.

Fun fact The first beings to leave Earth for space were fruit flies in 1947. The first animal to make a full orbit of the Earth was Laika, a stray dog rescued from the streets of Moscow and rocketed to fame aboard a Soviet spaceship. The first primate in space was a rhesus monkey called Albert II, lauched by US space programme NASA.

Did you know? There is no wind on the Moon, and so there is no erosion. This means that the footprints left by the astronauts will stay there for millions of years.

Illustrator notes Ben Newman is an award-winning illustrator and comic-book creator who lives and works in London. Can We Save The Tiger…