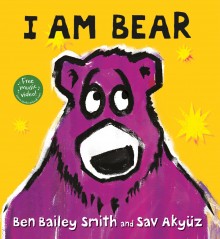 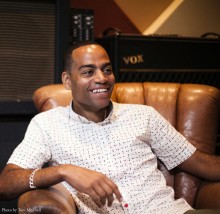 It’s not every day that you see a bare bear but this one’s butt is just that – until he pops on his purple furry suit and he’s ready for mischief!

Any book that starts with a bare bottom is likely to tickle a tiddler’s funny bone. The fact that this Bear’s raison d’être is to make mischief wherever he goes ensures the lively picture book is a giggle from start to finish.

There’s a touch of Baloo ‘I wanna be like you’ from Disney’s The Jungle Book in Bear’s big bumbling physique, but while Baloo’s role was that of sage mentor, Bear is more intent of playing practical jokes and making mischief – all for his own entertainment.

With a glint in his eye, Bear is the anarchist in the woods. Whether he’s pilfering doughnuts or cheekily painting a bull’s-eye on the butt of a slumbering bear, he pulls stunts for kicks. This Bear just don’t care!

The minimal text is written in a lively rap that begs to be read, or rather rapped, aloud – with attitude, of course – while the brilliantly vivid cartoon illustrations add an animated feel to the action as Bear leaves a trail of bemused and confused critters in his wake.

An unsuspecting squirrel becomes lunch, a rabbit is dismayed by a disappearing trick and a squirrel snoozing in a hammock is about to get a rude awakening. Bear attributes it all to having “fun with friends” – although in most instances, it looks like Bear is the one having fun!

Fierce fast-paced action and hilariously naughty antics make this irresistible fun for any child who loves to see mischief-makers get away with it.

Bear is incorrigible, yes, but you kinda gotta love him for it.

Fun fact In 2004, a black bear was found unconscious in a camping site in Seattle, Washington – after guzzling down 36 cans of beer. The bear had broken into campers’ cool boxes and used its claws and teeth to open the cans. Although it sampled several types of beer, it chose to drink all the cans of the local brew, Rainier beer before passing out.

Did you know? The largest mammalian carnivore that ever lived on land was the giant short-faced bear. Twice the size of the biggest modern bear, it was 6′ 5″ tall at the shoulder when standing on all fours. Scientists believe it had very long legs and chased antelope on the North American prairies. It died around 12,000 years ago.

*** MORE BEAR STORIES *** Check out our reviews for some of our favourites: A Beginner’s Guide to Bear Spotting, Winnie-the-Pooh Winter Collection, A Letter for Bear and Grrrrr! by Rob Biddulph. You can also find lots more fascinating bear facts in B is for Bear.

Author notes Ben Bailey Smith is an actor, stand-up comedian and rapper going by the name of Doc Brown. He is the creator of the BAFTA award-winning CBBC series 4 O’Clock Club and younger brother to novelist Zadie Smith. Ben is currently filming the movie Life On The Road by Ricky Gervais, and a new drama series for ITV Brief Encounter.

Illustrator notes Savu Akyuz is an acclaimed storyboard artist. He works with major brands including Guinness, BMW and Nike, and storyboarded the beautifully animated Bear and the Hare John Lewis Christmas advert in 2013.