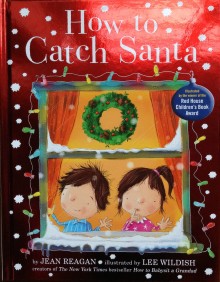 HOW TO CATCH SANTA 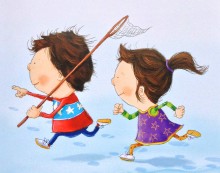 Nets at the ready!

How To Catch Santa

While some might be content to slumber peacefully and let Father Christmas get on with the important job of delivering presents, there’s an enterprising twosome intent on uncovering his secrets with their canny capture plan! But can they really outwit Santa?

There’s an unwritten code, possibly invented by parents, that Father Christmas will only come when everyone’s fast asleep so he can deliver his presents and leave in silent stealth.

But Santa is such an enigmatic, elusive type of fella, who can blame children who dream of actually meeting him and quizzing him on his fantastic life. There’s so many questions that need answers, like how fast do his reindeer fly? Does he really eat all those cookies? How does he squeeze down chimneys with, ahem, his fine physique?

There’s only one way to find the answers, and that is to catch Santa!

How do you go about ensnaring an unsuspecting Santa? This funny book is filled with ingenious ideas, canny tricks and super-sleuth suggestions to help Santa snatchers look for clues, such as any suspicious ‘ho ho ho’ noises or
the tinkling of sleigh bells

Of course, it’s not as simple as it sounds: after all, Santa has had plenty of practice to perfect his clandestine dealings, so there’s a simple rule of thumb for would-be catchers. Be crafty! Be clever! Be gentle!

And if all the efforts should come to nought? Well, as the authors wisely suggest, there’s always next year.

Fun fact The department store Santa tradition dates back to 1890, when Massachusetts businessman James Edgar became the first department store Santa. Edgar is credited with coming up with the idea of dressing up in a Santa Claus costume as a marketing tool. It worked, as children from all over the state dragged their parents to Edgar’s store.

Did you know? As well as being left out a snack of milk and cookies, Santa is often given other treats. In Britain and Australia, he is sometimes given sherry or beer, and mince pies. In Sweden and Norway, children leave rice porridge, while in Ireland it is popular to give him Guinness or milk, along with Christmas pudding or mince pies.

Author notes Jean Reagan is a children’s author living in Salt Lake City, Utah. She was born in Fairhope, Alabama, but spent most of my childhood in Japan. Jean started writing for children in 2003. She began writing her How To… series of books in 2012 with How To Babysit a Grandpa, followed by How to Babysit a Grandma, both of which made the New York Times and Indie bestseller lists. How to Surprise a Dad was published in 2015.