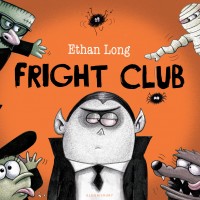 Petrifying preparations are afoot as Vlad the vampire gathers a ghoulish crowd for Operation Kiddie Scare, until some seemingly less-than-scary guests arrive to muscle in on the melee.

But it seems the Fright Club is something of an elitist group and when a cute little rabbit comes a-knockin’, he’s told in no certain terms to skedaddle.

The action has an animated comic-book feel as Vlad and his cohorts familiarise themselves with The Three Traits of Highly Succesful Monsters with hilarious, rather than horrifying, effect. The witty play on words of Virginia (the wolf) and Sandy (the witch) is worthy of a groan, too

As the saying (sort of) goes, hell hath no fury like a bunny scorned. And how to wreak revenge? Prove that cute critters can be scary too! So Bunny rounds up his own posse of beastly butterflies and terrifying tortoises as a rather unconventional scare crowd who manage to wipe the smile off Vlad’s fangs.

This fast-paced comic tale, with action-packed illustrations and speech bubbles, makes the perfect empowering introduction for young trick or treaters to show them that even the littlest can large it up at Halloween.

Author notes Ethan Long is a popular, award-winning and internationally recognized illustrator and children’s book author with over 70 titles, a Theodor Seuss Geisel Award and an Emmy-nominated television series to his credit. Two of his children’s books, Scribbles and Ink and Chamelia, have been optioned and are currently being developed into television series. Born and raised in Central Pennsylvania and Southern Connecticut, his childhood memories serve as inspiration for many of his drawings and stories. Just about all of his awake time is spent making art, writing stories and spending time with his wife, Heather, his three children, Katherine, Cooper and Carson, and his dog, Auggie, in beautiful and sunny Orlando, Florida, USA.