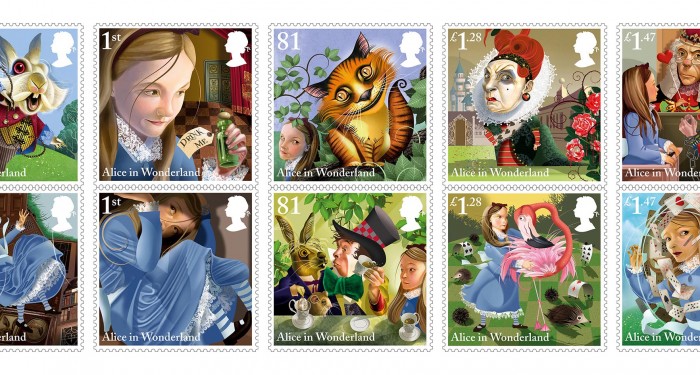 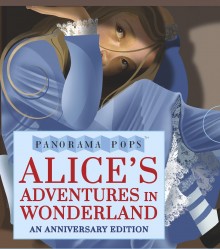 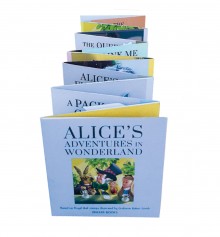 Down the Rabbit Hole…

The whimsical essence of Alice’s Adventures in Wonderland is perfectly distilled into ten vignettes capturing the most memorable moments from the classic tale in this bijou novelty book.

There’s something intrinsically ‘Alice’ about the playful format of this gorgeous celebratory edition. Contained within a neat slipcase, the pages of the book literally spill out into a fabulous concertina of illustrated pages and pop-up pictures like the sleight of hand of a trickster card player. And a crazy deck of cards seems somehow fitting.

Featuring some of the most iconic scenes from Alice’s magical journey through a fantastical wonderland, from her hair-raising tumble down the rabbit hole and encounters with the White Rabbit and a grinning Cheshire Cat to her dealings with a crotchety Queen and an unconventional game of croquet, each accompanied by a snippet of Lewis Carroll’s inimitable text.

The illustrations were also transformed into this wonderful commemorative edition that offers a pocket-size taster of Carroll’s definitive oeuvre. Along with a potted narrative, the book also delves into the story behind its creation and the real-life character, Alice Liddell, daughter of the Dean of Christ Church College, Oxford, who inspired the tale.

The perfect souvenir for any Wonderland fan: wrap it up and send with the accompanying Royal Mail stamps bearing the manic grin of a Cheshire Cat, an enticing ‘Drink Me’ potion or a Mad Hatter’s tea party.

The book is also available as part of the Wonderland Bundle that includes a Presentation Pack, Framed Stamps £36 from Royal Mail.

Did you know? Lewis Carroll tried out a few different titles for his novel. The original tale presented to the 10-year-old Liddell was Alice’s Adventures Underground, but upon publication, Carroll decided he might call it Alice’s Hour in Elfland. Another rejected idea was Alice Among the Fairies. Eventually, he plumped for Alice’s Adventures in Wonderland.

Author notes Charles Lutwidge Dodgson (1832–1898), better known by his pen name Lewis Carroll, was an English writer, mathematician, logician, Anglican deacon and photographer. His most famous writings are Alice’s Adventures in Wonderland, its sequel Through the Looking-Glass, which includes the poem Jabberwocky, and the poem The Hunting of the Snark, all examples of the genre of literary nonsense.

Mostly self-taught, Grahame Baker-Smith used a spell of unemployment in the 1970s to develop his interest in painting and drawing. Working alone, he decided that he should concentrate on becoming an artist. He now writes and creates books as well as illustrating classics, such as Pinocchio and Robin Hood. He also illustrated Robert Plant’s Mighty Rearranger album and Nine Lives boxed set. In 2011, his picture book FArTHER, published by Templar, won the UK’s Kate Greenaway Award for Book Illustration. Grahame lives in Bath, Somerset, with his wife and three children.